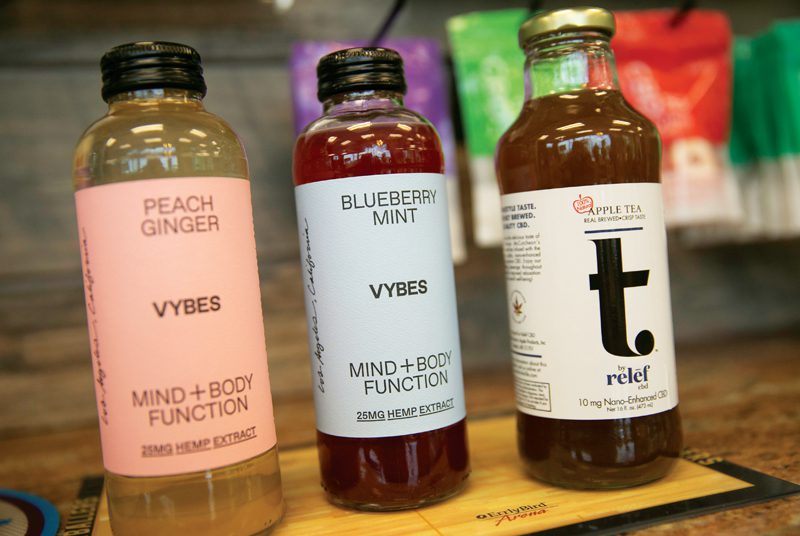 A walk into THrīv for Life Nutraceuticals in Frederick feels like a walk into a laboratory. That’s because THrīv for Life makes products from cannabidiol, or CBD. Lotions, concentrated liquids known as tinctures and powders are formulated like any other healthcare product, in a safe, sterile setting, says Kevin Klink, owner of THrīv (pronounced “thrive”).

CBD is an oil usually produced from hemp plants, although it can also be made from the marijuana plant. But there’s nothing in it that can give you a high, Klink says. CBD is touted for its pain-relief qualities, although Klink says not all CBD products are created equally. THrīv CBD products are made and distributed at THrīv’s manufacturing center, which resembles the other bio-pharmaceutical companies that have sprouted up around Frederick.

The low, brick building off Crest-wood Boulevard has long, brightly lit corridors, rows of offices and a large lab filled with stainless steel tables, auto-claves for sterilization and what looks like a very large, stainless steel kitchen mixer. This is where Jalita Boffman,sales and operations manager, works with a small staff to make the products. Most are sold under THrīv’s Relef (pronounced “relief”) label. “We make everything by hand,” Boffman says. “We know about sterile techniques.”

During a recent visit, boxes of products were being readied for shipping. One of THrīv’s latest products, made by McCutcheon’s Apple Products, is Relef CBD Apple Tea. This fall, the company plans to team with McCutcheon’s to make a CBD-infused soda.

THrīv products are sold by online order and through Kannavis Trading Company, an Urbana brick-and-mortar store and the sister company to THrīv. Kannavis also sells medical marijuana, or medical cannabis. “A lot of the stigma of CBD is because people don’t know the difference between CBD and marijuana,” says Jane Klink, co-owner of Kannavis.

Most of THrīv’s CBD is grown as hemp in Colorado. Hemp, historically used to make rope and strong fabric, is a fast-growing plant that farmers can grow commercially. Once grown widely in the United States, hemp was banned in the 1930s because of its close relationship with marijuana. The 2018 Farm Bill passed in December made growing hemp legal again.

Hemp can be grown for either fiber or seed oil. It’s the seed oil that is made into CBD. This oil is extracted from the flowers and seeds of either cannabis or hemp, according to Project CBD, a nonprofit that compiles information about CBD and hemp.

CBD comes to THrīv as a yellow powder. Most of it is grown from hemp processed without toxic chemicals. Some of it comes from cannabis plants, but CBD from either source contains less than 0.3 percent THC. Although it looks like a solid, it is actually an oil. Like any oil, it doesn’t mix well with water.

WHAT DOES IT DO?

CBD has many health benefits, Jane Klink says. THrīv’s most popular product is Relef Muscle Rescue, a topical muscle relief lotion. “It gives you that warming feeling on your muscles,” she says. “It’s hard for me to keep Muscle Rescue in stock,” says Brigid Ayer, manager for Kannavis Trading Company. “We have runners, former police officers and veterans who all use it.”

Studies have borne this out. A 2017 article in the journal Pharmacy and Therapeutics reported that preliminary clinical trials showed that high doses of CBD, of 160 to 500 milligrams per day, may have therapeutic benefits for epilepsy, insomnia and social anxiety disorder. Another study reported by Harvard Health showed that CBD helps with inflammation and neuropathic pain.

Laura Harrison is a 34-year-old Frederick freelance writer and mother of a toddler. She’s also been in chronic pain for the past 18 years. A car accident at 16 and fibromyalgia have left her with waves of severe pain.

She applies Muscle Rescue to achy muscles. In the morning, she mixes water with Boost Powder, which contains a low dose of CBD, for a kick that doesn’t have the side effects of caffeine. At night, she takes a drop of CBD oil, which, in higher quantities, helps with sleep. She first tried CBD 18 months ago when a massage therapist used it on her back; her back never felt better. “CBD has made my life so much better,” she says.

Dr. Craig Hauser, a physician who practices in Braddock Heights, recommends CBD for patients with inflammation, anxiety and sleep problems. About 25 percent of his patients use CBD and most have found that it eases their symptoms, he says. Hauser also serves as clinical director for Kannavis.

“As an anti-depressant, it helps get the edge off,” he says. He has had patients who take a drop of CBD tincture before giving a presentation or flying. Others take it if they’re having trouble sleeping. He also has patients use Muscle Rescue after an intense workout or a day of heavy gardening. Some take daily tinctures to help chronic conditions, while others use topical applications for pain flare-ups.

CBD works to target pain or inflammation receptors in the body. “It’s like a lock-and-key mechanism,” Hauser says. “Through chemical messengers, it goes to the receptors to get rid of pain, either topically or systemically,” he says. Everyone metabolizes CBD differently, which is why people have varying success with treatment. “Some people experience stronger effects than others.”

“It plugs the holes in your system,” Ayer says. She has clients who use CBD for rheumatoid arthritis, Crohn’s disease, irritable bowel syndrome and several autoimmune disorders. Many patients use it for their pets, especially those with anxiety or epilepsy. She recommends pet owners check with their veterinarians to adjust dosages.

Jane Klink is hoping more clinical studies will back up preliminary findings on CBD. “We need testing to see if there are side effects,” she says.

Many outlets around Frederick sell CBD products. Firestone’s Market carries a drink called Vybes, which contains 25 milligrams of hemp-extracted CBD. “It’s quite popular,” says market owner Kim Firestone. “There was a time when we couldn’t get it.” Serenity Market also carries several products containing CBD, as does the Common Market.

Like many holistic health products, CBD is still unregulated, Jane Klink says. “There are tons of people making this stuff in their garage with no regulations,” says Kevin Klink. Some growers produce the seed oil as a byproduct of hemp grown commercially, with pesticides. Many CBD products sold on the open marketplace are from plants that are not tested for the presence of those pesticides, according to Project CBD. “It hurts those of us who do it right,” Jane Klink added.

The raw CBD used by THrīv is tested for potency, pesticides and microbial activity by independent labs. Customers are provided with a certificate of analysis to prove the product was tested. The certificate proves that the ingredients are valid, the CBD is pesticide-free and the THC level is below 0.3 percent. THrīv CBD is also free of genetically modified organisms. “Not every company does this,” Jane Klink says.