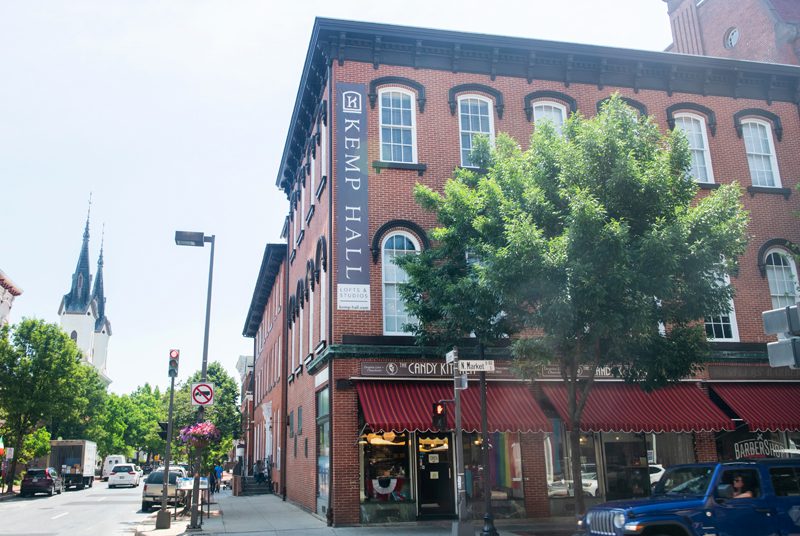 Kemp Hall, the three-story brick building on the southeast corner of Church and Market streets in Downtown Frederick, has been a lot of things in its century and a half history—a church parsonage, meeting halls and offices. But, for a brief moment in 1861, it was at the crossroads of American history. That spring, with the nation and state divided, with Baltimore seething in the aftermath of bloody riots that left more than a dozen dead and Annapolis occupied by federal troops, the Maryland legislature met at Kemp Hall to vote on whether the Old Line State would leave the union.

Fast-forward 158 years and Kemp Hall is preparing for a new purpose: luxury apartments. The old meeting halls where state legislators debated secession have been transformed into six soaring loft spaces while the rear wing of the building, the old parsonage on Church, contains a mix of one-bedroom and studio units that combine modern living with historic appeal. “Originally, they were open halls with pillars, but they had been cut up over the years into things like dentist and accountants offices,” says Andrew Welker, senior development manager with Ausherman Development Corporation. … “We were able to keep all the original stairs and 80 to 90 percent of the original hardwood floors.” The yearlong construction project uncovered other features that were incorporated into the finished units.

The project, one of nearly half a dozen in various stages around Downtown, is a textbook example of adaptive reuse—simply put, finding new life for old buildings. “It’s the most sustainable approach to construction—it’s like recycling,” says Bruce Zavos, the architect for 520 N. Market, a partnership between Interfaith Housing Alliance and PIRHL Development that has transformed a former government building into a mix of 59 affordable and market-rate apartments.

Built in 1896, the building served as the city’s high school for boys until 1912 and then as an elementary school until the mid-1960s. It was also home to Frederick Community College and, after the college relocated to its current campus in 1971, it provided office space for the county’s Citizen Services Division.

The new apartments use the original school building as well as a new addition that tucks parking underneath. “The old Citizen Services building was finished first and at this point, that one is completely full [with tenants],” says Jodie Ostoich, Interfaith’s president and CEO.

A town filled with historic structures, Frederick has a long history of adaptive reuse, whether it’s turning an old opera house into a brewery and restaurant, a firehouse into a financial center or adding storefront windows to a townhouse in order to create retail space. But driven by the growing demand for Downtown living, the projects currently taking shape are mainly about housing, including the Pythian Castle condominiums.

“Once we finally got things rolling, they were hot,” says Ashley Warthen, who along with her husband Paul, served as listing agents for the Pythian Castle project. “There’s nothing else quite like this in Downtown Frederick, it’s a groundbreaking project,” says Michael Fitzgerald, the developer who turned the Court Street building with the crenelated façade into seven upscale condos.

Built in 1912 by the local chapter of the Knights of Pythias, a fraternal organization whose distinctive lodges grace downtowns across the country, the building features the sort of historic appeal that Downtown homeowners have appreciated for years. “We liked the high, arched ceilings, the original flooring, the views of the spires, just the character of the building,” says Don Tarleton, whose unit also includes stained glass carried over from the original Knights of Pythias meeting hall.

In addition to historic charm, adaptive reuse projects often include a facet preferred by those looking to downsize in their later years. “They want it all one level and they want to age in place,” says Warthen. According to Jane Branski, that’s what led her and husband Fred to transition from a Downtown townhouse to a Pythian Castle condo. “We loved it but it was three stories,” she says of the couple’s former home on West 3rd Street. “Down the road we were going to have to move sooner or later and then we saw this—and it’s not easy to find a condo in Downtown Frederick.”

For Branskis’ neighbor, Frederick native Neil Markey, history was part of what led him to buy his unit in the Pythian Castle. “My grandfather actually worked in the building,” Markey says. However, the thirtysomething was more attracted to the Downtown lifestyle. “I’ve been living in big cities for the last 15 years and Frederick has come a long way in that time and Downtown really has a lot to offer,” Markey says. “I love the walkability, not needing to get in my car all the time, it’s much more simple to have everything at your fingertips.” His minimalist approach to life is reflected in the bare-bones décor of his condo, which relies on the inherent beauty of exposed brick, refinished hardwood floors and extensive custom woodwork. “Neither my girlfriend nor I have many things,” Markey explains. “We’ve been living as vagabonds for a couple of years.”

Not anymore, though. Whether empty nesters or millennial minimalists, people are paying a premium for Downtown living. Most of the Pythian Castle condos sold around the half-million mark, with the top floor condos commanding more than $750,000. “We’re sold out and we sold them for the highest dollar per square foot,” says Warthen.

Over at Kemp Hall, even the studio units rent at around $1,200 a month. “Per square foot, they were priced the most aggressively and these were the first to go, these small 560-square-foot units,” says Welker, adding that “we tried to get more of them but there were limitations.”

The limitations inherent in adapting a 100-year-old building to new uses, as well as the prior condition of the building, are a significant factor in those prices, too. “When Fitzgerald bought the Pythian Castle, it was an abandoned project. It had been abandoned for almost a decade and it was completely gutted,” he says.

Kemp Hall was in far better condition, but the project still presented challenges. “In order to meet life safety [requirements], sprinklers were required and we had to address the unit separation,” says Welker. Americans With Disabilities Act requirements and the fact that floor levels in the building’s two wings didn’t line up, required the installation of two separate elevators as well as an access ramp on Church Street.

“The ramp was certainly the most discussed exterior improvement,” says Welker, “just to figure out the best way to address the requirements.” Adaptive reuse “requires a lot of thinking things through, you’ve got hard points, bearing walls that you’ve got to work around,” says Zavos. And like any renovation project, that extra thought often translates into time and money.

In many ways, projects like the Pythian Castle and Kemp Hall are moving forward precisely because prices Downtown are rising. “The development community is always going to respond where the market is,” says Mayor Michael O’Connor. However, for some projects, those prices still aren’t enough to make a project profitable, which is where things like Historic Preservation tax credits come into play.

For commercial projects in historic districts like Downtown Frederick, the state of Maryland and the federal government offer credits that, when combined, can cover as much as 40 percent of a developer’s rehab costs. “The tax credits are absolutely critical for the viability of the project. The cost of renovation exceeds the cost of new construction and the credits are what make up the difference,” says developer Jim O’Hare, who’s converting the former Visitation Academy on 2nd Street into a 60-room boutique hotel.

There are strings attached, though. In addition to the city’s Historic Preservation Commission, the developer must navigate state and federal agencies that oversee the tax credits. “That process governs both the interior as well as the exterior,” O’Hare says, “and the Maryland Historic Trust and the National Park Service want to see as much as possible of the nature of the spaces remain unchanged.”

Plans for Visitation’s massive 65,000-square-foot main building, built in stages between 1846 and 1860 and run as an all-girls Catholic school for more than 150 years, include the hotel, meeting space and a restaurant in the restored chapel. The former preschool along Church Street will be converted into rental apartments and there will be condominiums in two new buildings on the nearly three-acre campus. Currently under review by the city planning and zoning department, O ‘Hare says, “We’re hoping to get approval this summer and start construction in the fall.” With an expected 18 to 24 months of construction, “If all goes well, we’ll be open in 2021.”

Historic preservation tax credits are also a component of the development taking shape at the former Goodwill Monocacy Valley building on East Church Street. Built in 1891 by the Ox Fibre Brush Company, developers Hook Properties and EquityPlus are planning to convert the old factory complex into 83 units of affordable housing. “Hook originally bought the building intending to do market-rate rental, but after looking more closely at it, brought us in,” says Avram Fechter, managing director with EquityPlus. “It’s not every day that you find a site where there is, without question, demand for workforce rental and where you can get the numbers to pencil out.”

Those numbers “pencil out” largely because the Goodwill project is also tapping into the Low Income Housing Tax Credit, an incentive that’s also a major part of Interfaith’s 520 N. Market development. “The tax credits are divvied out to the states based on population and then the [Maryland] Department of Housing and Community Development, runs a competitive process and you’re competing with the rest of the state for the credits,” Interfaith Housing Alliance’s Ostoich says.

Once awarded, those tax credits are then sold to investors. “That’s how money gets brought into the project—for us, the investors own 99.9 percent of the project,” Ostoich says. It’s an infusion of capital that allows developers to keep rents affordable. “The sweet spot that we’re serving is the 40 to 50 percent of Area Median Income,” says Ostoich. “You have to have a real income, but you’re not necessarily able to afford a market-rate rental, especially Downtown,” says Fechter, adding that the Goodwill development will be aimed at people earning “$30,000 to $50,000, depending on the household size.”

According to Mayor O’Conner, the mix of upscale and affordable developments “just within blocks of each other shows the variety of opportunities there are Downtown.” However, gaps remain, especially in the middle ground between affordable and upscale.

“We have to be aware of that possibility and constantly evaluate where the market is and the range of housing options available,” O’Connor says. Because while there’s little government can do to reduce the brick-and-mortar costs of renovation, there are some policy tweaks that could make adaptive reuse easier—whether adjusting the Adequate Public Facilities Ordinance or changing the way school impact fees are calculated.

“Those impact fees are heavy for units that are unlikely to ever produce a student,” says Welker, with the mayor saying, “We have to be aware of our regulations and what they do to encourage or discourage what we want,” because when it comes to adaptive reuse, the alternative isn’t just blighted and empty old buildings.

“I could have made more money just building a bunch of houses,” says Fitzgerald, referring to the Pythian Castle, “but it’s an absolutely exquisite building. My biggest regret was not moving into a condo myself.”