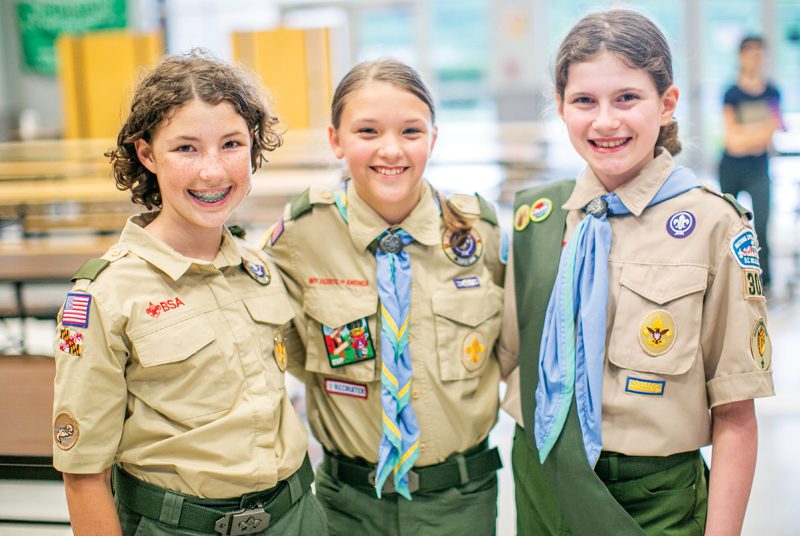 The girls of Troop 3017 emerged from tents on their first campout into a snow-covered landscape. Since that March adventure, the girls have practiced archery, visited with U.S. Supreme Court Justice Ruth Bader Ginsburg, learned about search and rescue dogs, and gone hiking.

Scouts BSA began signing up girls ages 11 to 17 on Feb. 1. Troop meetings, camping trips and most field trips are single-sex. Troop 3017 was the first of four chartered girls-only troops in Frederick County, which is part of the Boy Scouts of the National Capital Area Council. Other local girl troops are being formed.

Brooke Kellogg, a seventh-grader who lives in Urbana, was excited to join. “I needed more outdoor stuff in my life,” Brooke says. She’s also a Girl Scout, but her particular troop didn’t offer as much adventure. Brooke’s older sister, Beth, a rising sophomore at Urbana High School, joined for the hands-on training in outdoor skills. “We use tools, axes, saws, once we get qualified,” she says. She’s been trying to earn all the tool certifications offered.

Beth is also a Girl Scout. “We do some camping, but it’s more indoors than outdoors. We do more leadership stuff. We teach kids how to be respectful,” she says of the Girl Scouts. All worthy goals, she adds, but she wanted to sharpen her primitive camping and wilderness survival skills, and she wasn’t getting those in her particular Girl Scout troop. Beth hopes to attain the rank of Eagle Scout, the highest rank in Scouts BSA, and to earn the Gold Award, the highest award in Girl Scouts.

Monica Robyns is Troop 3017’s leader. A former Girl Scout leader, Robyns was intrigued by the challenge of leading girls who wanted to learn more outdoor skills. “In Girl Scouts, troops have a lot of variables,” she says. In Scouts BSA, outdoor activities are baked into the curriculum, she says. “For Scouts BSA, the requirements are the same in every troop.”

Her troop has 31 registered members and counting, with nearly as many adult volunteers. At a recent meeting, adults worked with girls to learn skills for merit badge requirements. Several girls have already earned the ranks of Scout, Tenderfoot, Second Class and First Class, all ranks on the path toward Eagle. Robyns fully expects many of her girls to earn both Eagle Scout and Gold Award honors.

Scouts BSA offers members the flexibility to sample troops. “You can look around and go to any troop you want,” Robyns says. “If you’re unhappy with one, you can go to another troop.”

Troop 3017 meets weekly at Oakdale Middle School. The girls join their “brother” troop for Color Guard and then head in different directions to meet. Ashlyn Cooper, 15, a high school sophomore, is the troop’s senior patrol leader and serves as the troop Scout leader. At a recent meeting, she set patrols to work planning menus for a camping trip to Swallow Falls State Park and made sure girls who weren’t going camping were working on other skills.

All members of Scouts BSA can choose from 135 merit badges; they all follow the three pillars of Scouting—citizenship, leadership and outdoor skills. “I feel like I’m learning a lot of leadership skills,” Ashlyn says. She helped to organize the troop’s weeklong camp to Goshen Scout Reserve last month. Waking up to snow and ice on the March campout whet her appetite for more. “It was awesome,” she says.

Her patrol has decided to work on biking, ice skating, fitness and outdoor skills badges. “I’ve always been more of an outdoors person,” she says. She’s helping the troop plan a biking trip.

Troop 3017 camps about once a month. Emily Smith, 11, a sixth-grader at Governor Thomas Johnson Middle School, saw how often her brother camped, and wanted to join in the fun. She’s now working on her Tenderfoot rank. Charley Drayer, 11, also joined after watching her brother go off on Scout camping trips. “It teaches you life skills and discipline and is an all-around fun experience,” she says.

Rebekah Icore, 17, a rising senior at Oakdale High School, is going for the rank of Eagle. Typically, Scouts must achieve this rank before their 18th birthday and need to be Scout members for at least 19 months, but Scouts BSA is allowing all 16- and 17-year olds who registered after Feb. 1, 2019, to have two years to complete Eagle requirements. Rebekah hopes to take advantage of this. “I joined Scouting because I love to go camping, and Scouts BSA made it easy to do that,” she says.

The girls took their menu planning seriously. Charley’s patrol decided on make-your-own fajitas, and debated whether breakfast should be regular oatmeal or apple cinnamon-flavored. At campouts, Scouts BSA rules call for girls tenting together to be no more than two years apart in age. Scouts BSA applies the same rule to boys’ troops.

While on the campout, adult volunteers work with the youngsters on merit badges, and make sure the girls meet all the safety requirements.

Rebekah is new to Scouts BSA, but she’s not new to Boy Scouts of America. She’s been in Venturing for two years. Venturing, which spun off from Exploring Scouts, is for young women and men ages 14 to 21. It focuses on adventure, leadership, personal growth and service. Females have been part of Exploring and Venturing since 1969. Joining Scouts BSA, she says, “Is pretty natural to me.”

Sea Scouts, a co-ed Scouting program for those 14 to 20, teaches boating, water safety and other maritime skills to members. Females have been part of Sea Scouts since 1972.

Women have also served as Boy Scout leaders since 1988. Women’s leadership in Cub Scouts dates back to the 1930s, when Den Mothers led the troops. Den Mothers became Den Leaders in 1967, when men were also allowed to lead Cub Scout troops.

Lidia Soto-Harmon, CEO of Girl Scouts Nation’s Capital, says girls in Frederick County and the rest of the region have access to eight camps. “We have lots of opportunities for girls to do high adventure,” she says. “Outdoors is one of our four pillars, but it’s not the only thing we do.” Girl Scouts provides girls a chance to lead in girl-only environments, she adds.

Meanwhile, Scouts BSA Troop 3017 is already planning their summer 2020 adventure. The troop is planning to attend the National Scout Camp at Summit Bechtel Reserve in West Virginia, where they’ll get a chance to kayak, fish, climb rocks and ropes, learn orienteering, ride mountain bikes, practice target shooting and archery, learn about the natural world and more.

They’ll be able to choose from 32 merit badge programs, all of which count toward the rank of Eagle.