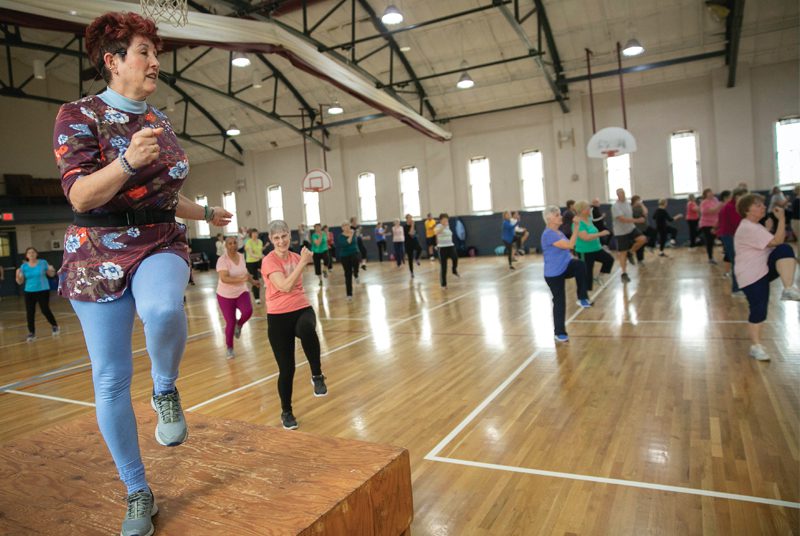 Jim Wisotzkey picks up a nearly 4-pound duckpin bowling ball, stands in his lane at the Walkersville Bowling Center and uses a conventional bowling form to roll the sphere down the lane. The 95-year-old has been bowling since the age of 14 and his cardiologist wants him to keep up with the sport.

“When I go over to see him at the [Veterans Affairs hospital], as soon as I walk in the door he says, ‘What’s your average?’ He doesn’t care what my heart is doing,” he jokes.  So, what does the retired U.S. Marine who fought in World War II say? “I actually tell him the truth,” Wisotzkey says. “I average about 145 now.”

Wisotzkey goes bowling every Thursday in Walkersville as a part of the Frederick Senior Recreation Council, which he joined last year. He had to take six months off after a torn ligament. “But I came back. I don’t know why,” he jokes again. “I sure ain’t doing very good. I only had one mark in the first game, and I got no pins on it and threw the ball down in the gutter.” He also does 10-pin bowling at Terrace Lanes in Frederick. “I like that better than duckpin, but my score is not too good there, either,” he says.

It’s the camaraderie more than the bowling that brings him back every week, along with the opportunity to get to know the other senior rec council members. Usually around 15 people show up weekly. They have two different bells; one to ring for strikes and one for spares. Whenever one is rung, cheers and claps erupt. There’s also a fair amount of good-natured ribbing.

The senior rec council was formed a quarter of a century ago in a grassroots effort by a group of seniors exercising together through a free city recreation program. In fall 1993, their beloved instructor quit after her salary was cut. The seniors left the program, hired the original instructor and began exercising at Calvary United Methodist Church. “We decided to charge a dollar a person,” says Helen Schley, a founding member. “We needed $35 to pay the instructor. We were shaking in our shoes. Suppose we don’t have that many? Well, we did. We had 40 and from then we were on our way. People came and it was the best deal in Frederick.”

Quickly outgrowing their location, group members went to the Frederick County Board of County Commissioners who later approved the formation of the Frederick Senior Recreation Council under the county’s Parks and Recreation department with the first monthly meeting taking place in April 1994.

Exercise was the group’s first activity, held at South Frederick Elementary School, now Lincoln Elementary. A year later, the group moved to the William R. Talley Recreation Center where they continue to exercise today with around 100 senior participants each session. Participants pay a $10 fee to join the council in order to participate.

Peter Alvestad does the council newsletter and was named chairman last year. He has been coming to exercise classes since 2014 after retiring. “You go to work every day with the best intentions of after work [saying], ‘I will exercise but not today’ and that goes on for 30 years and you find out you haven’t exercised,” he says. “So, I thought, ‘How can I exercise regularly?’”

He attends classes every Monday, Wednesday and Friday, which offer variety at each gathering. One day they’ll use stretch bands, another class is hand weights, while another is stretching. Alvestad notes that in other groups or gyms sometimes people are not supportive of others if they have not exercised in a while. “Here, it is a very supportive exercise group,” he says. “[People will ask], ‘Hey is everything OK?’ ‘Why don’t you get a drink of water?’ Things like that. It’s very, dare I say, loving? It’s a very nice group.”

A few years after its founding, the council began offering a range of activities for seniors, including line dancing, tennis, horseshoes and walking. Today, the council has around 450 members and offers basketball, book and bridge groups, softball, bicycling, and both easy and moderate hiking.

Mary Ann Gearinger leads the Golden Tones Senior Chorus whose season runs from September through May. The group practices every Monday at the Frederick Senior Center and performs weekly at elder care centers in the area. Made up of around 40 members, the chorus has both men and women and sings songs familiar to older generations, such as musical show tunes. “You’ll find that [the audience] will sing along with you,” Gearinger says.

She heard about the chorus eight years ago as a member of the council’s exercise program. “I’ve always done singing,” she says. “I’ve been in several different choruses and choirs over the years. I thought, ‘Well it will give me something to do.’”

Gearinger enjoys the people. “We all get along so well,” she says. “Everyone enjoys singing. Not everybody is talented in music, but they enjoy singing and that is the important thing. … I think it gives us a very good feeling that we are bringing joy to people, especially in the nursing homes. When we start to sing then the smiles come out. It really is a lovely thing. It gives you a good feel-ing that we are doing something important in their lives.”

Gearinger is also one of the coordinators of the exercise program and serves on the council board.

“As I look around in the exercise class, I see people in their 80s, a couple of people in their 90s, and if it weren’t for exercise, they wouldn’t be able to move around like they do. It really is an eye-opener as far as seeing older seniors really moving around.”

Gerry Blessing, who leads the rec council’s duckpin group, notes that he was first drawn to duckpin bowling more than 30 years ago because there were several facilities in Frederick. “I thought it was more interesting in that all ages could play,” he says. “On the other hand, it is a very frustrating game. The scores can be all over the place,” Blessing says. “A really good score in duckpin bowling is 150. Next game, you could bowl an 80.”

When asked why he comes to bowling every week, county resident Jim McMorrow says, “These guys” as he waves his hand at the bowlers all around him. He hasn’t been a council member for very long but has bowled his whole life.

Leah Knerr, of Frederick, has been bowling with the council for about two years. With a love of the game, she also enjoys the socialization aspect and the ability to exercise. “As you age, you have to be concerned about your balance,” she says. “I think [bowling] is good for your balance.”

Rosie Lepera, of Frederick, joined the council last year. “I love bowling,” she says. “It is good exercise. A great bunch of women that I have met here. All these women are very nice. … This is the best exercise you can get. The company of all these people. It is the best community get together I’ve ever been in.”