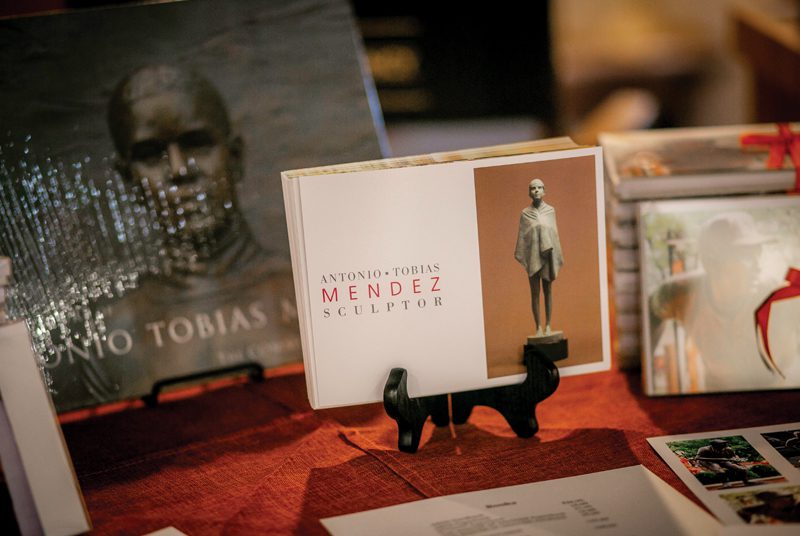 He’s been a part of what was formerly Pleasant Valley Studio since he was in high school, but after his father’s passing in January, Toby Mendez decided to stay here in Knoxville and continue to work where he’d always found inspiration. He also has big plans for its future.

“I’ve always had a space out here, in the basement where it is now,” Mendez says of his home/studio that was once the domain of his father, the CIA agent and artist Tony Mendez. The elder Mendez was immortalized in the 2012 spy movie Argo (in which Ben Affleck played Tony) and enjoyed a career as painter of impressionistic landscapes and outdoor scenes.

The father obviously was—and remains—a large influence on Toby, as was his mother, so he didn’t really have a prayer of being anything other than an artist of some kind. That was fine with him because art is where his interest and considerable talent has always been. His first medium was wood, but then he started carving marble. “Mom made me move it out of the house because it made too much dust,” he says with a smile.

“She did a sculpture of me in clay when I was about five. It made an impression on me, that anyone could do that. So, I started playing with clay,” he says. Karen Mendez was a self-taught decorator whose example of color placement was an inspiration to him. Sadly, his mother passed away in 1986 when Toby was in college.

During high school he was chosen to participate in a program for artistically gifted and talented students at Goucher College in Towson before earning a bachelor’s degree in fine arts from the Art Institute of Chicago. After he finished college, space was added to Pleasant Valley, which housed his father’s art studio, to include Toby’s sculpture studio and the gallery. His stepmother, Jonna, would also keep her photo studio at Pleasant Valley.

After graduation, he began doing shows, which led to accepting private commissions and applying for public projects, as well. The United States Navy Memorial commission, located on Pennsylvania Avenue in the heart of Washington, D.C., was his breakthrough. “That set my career,” he says of the path that has brought him national acclaim as a sculptor for nearly three decades.

Two of his better-known installations include the Thurgood Marshall statue at BWI Marshall Airport and the likenesses of six Baltimore Orioles baseball legends that have graced Oriole Park at Camden Yards since 2012.

Having two artists as parents, did he ever get any advice from them? “Mom and dad both talked to me about being dedicated,” he remembers, but they never pushed him, per se. “That would have been a turn-off,” he says. But there is one phrase that he remembers his father impressing upon him: “Put the time in” on whatever you do. 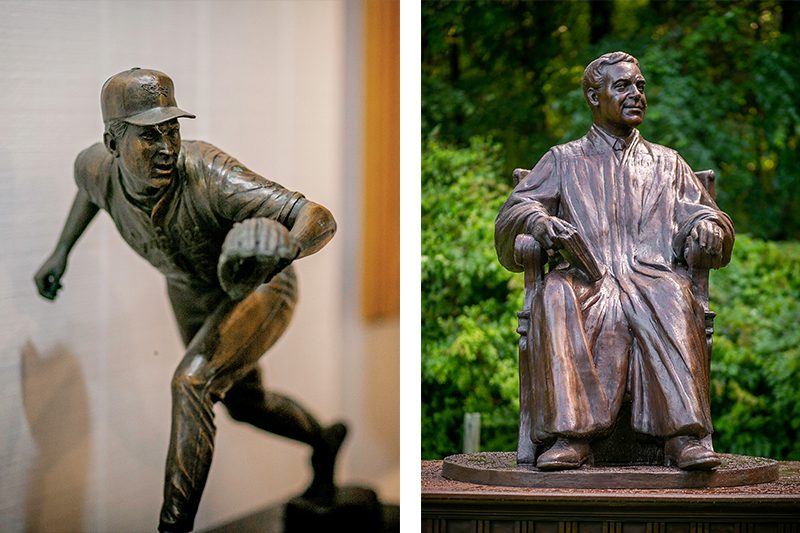 “Dad didn’t want this place to go to strangers”

His father’s diagnosis with Parkinson’s disease more than 10 years ago was a watershed time for Toby. “Dad was a young father, only 23 years older than me. I wondered about the heredity aspect of the disease and questioned what I wanted to do with the next 20 years of my life,” he says. It was about that time he and Dee Dee Johnson became friends, and Toby found her optimism and “seize the day” aspect of her personality to be inspiring, and just the kind of encouraging outlook he needed to consider continuing his career path with purpose and enthusiasm.

Then, several years ago, a terrible ice storm isolated Jonna and Tony in their home adjacent to the studio for days. The family realized that changes needed to be made. With Tony’s progressing illness and the feeling of helplessness in an emergency weighing heavily on their conscience, the family began to think of moving the couple somewhere closer to the services they needed. It was the beginning of evolution at Pleasant Valley Studio.

It was not easy for any of them. Considering selling the compound consisting of the house, studio and gallery was not something Tony, who had built it over the span of 30 years, even wanted to think about, let alone plan. He had built it with his own hands, first as a house for his young family, then adding on, tripling its size to accommodate his growing family and their artistic endeavors.

During his tenure at the CIA as a forger and master of disguise, the rural compound was his refuge from the spy business in which he and Jonna were engaged for decades. The drive out of the D.C. area to the hills of Knoxville allowed him to leave the tensions of the workday world behind, and the sights and sounds of nature that surrounded his mountain estate allowed artistic creativity to envelop him.

“Dad didn’t want this place to go to strangers,” Toby says. So, with Dee Dee, who by then had become both a life and business partner, he started talking about taking over Pleasant Valley Studio, making it the couple’s home and maintaining it as his studio.

As with most projects, planning was one thing but actually implementing the plan was another. “He never said to keep it as is,” Toby says of his father’s attitude toward his taking the helm at the studio. “He didn’t want it to be a shrine to him.” Toby had no plans for extensive changes. 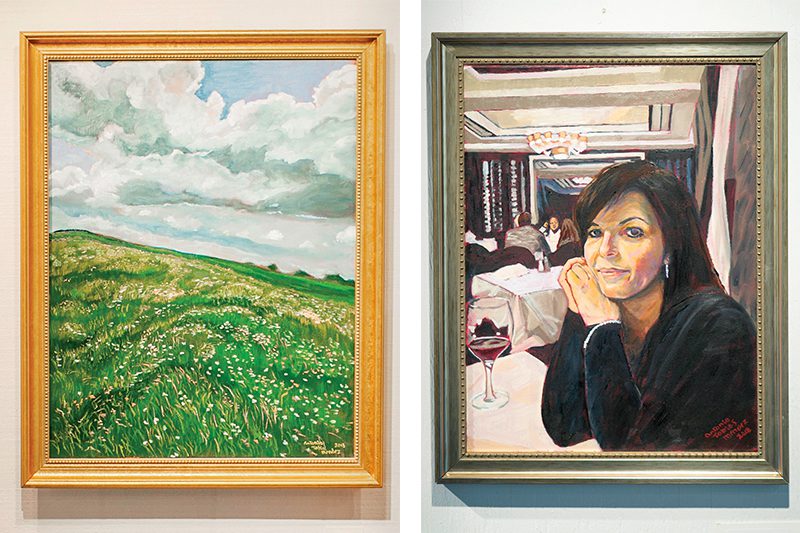 “We can’t make it a shrine”

Yet, it was hard for Tony to leave, even knowing that it was in capable and caring hands. In addition to it having been where his art gave him refuge from work, he and Jonna had formed a life together here. It was where he could relax in the quiet of the hills southwest of Frederick, commune with nature and find his emotional balance.

Tony’s feelings about having to leave Pleasant Valley Studio is captured in a recent painting of him by Toby—yes, he’s a painter, too. It’s that of his father sitting on the back porch of the house looking over the flowers and sculpture in the back yard. His expression is a mixture of reverie, sadness and sense of fulfillment he found in this space. When Toby asked his father how he felt about leaving this place that was his domain, all Tony could say was, “It sucks.” In 2015, Tony and Jonna moved to Reston, where she still lives. 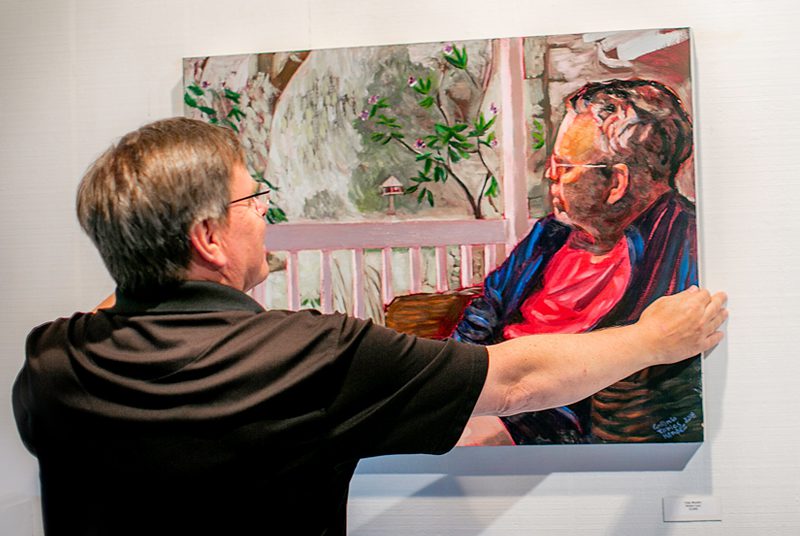 For as invested as Toby has always been in this place tucked into the hills, he realizes that time can’t—and shouldn’t—stand still. His career must move forward and the setting for his creativity and hard work will, out of necessity, change. By way of accepting that, he says, “We can’t make it a shrine to [Tony and Jonna]. It’s not what they would want, but the plan is to stabilize what’s here and update some other things.”

The kitchen had been expanded in 2002, but Toby would like to update it again, as well as expand the bathrooms and the master bedroom as a suite so there is more storage and closet space while preserving its beauty and heritage of the home.

The plan that truly excites his passion is an expansion of the existing sculpture garden. “I’d like to tie the garden more to the house—to have space to entertain outdoors amid more sculpture in the garden,” he says.

Toby hopes to continue private and public commissions, as well as developing the gallery. Dee Dee is in lockstep with him, adding her people skills to his vision of the future for what is now Toby Mendez Studios. Part of that is for Toby to do more cohesive sculpture and painting: landscape painting that includes more figures to echo his interest in both. “To tie them together as my imprint,” he explains.

Toward that end, he and Dee Dee have been rethinking the business with an eye toward creating a new body of collectors and developing partnerships with the community at large. “We’re trying to figure out how to best serve the community,” he says. Dee Dee says this could include “collaborative events with other members of the business community, dinners with the artist, intimate art shows and possibly incorporating music.” 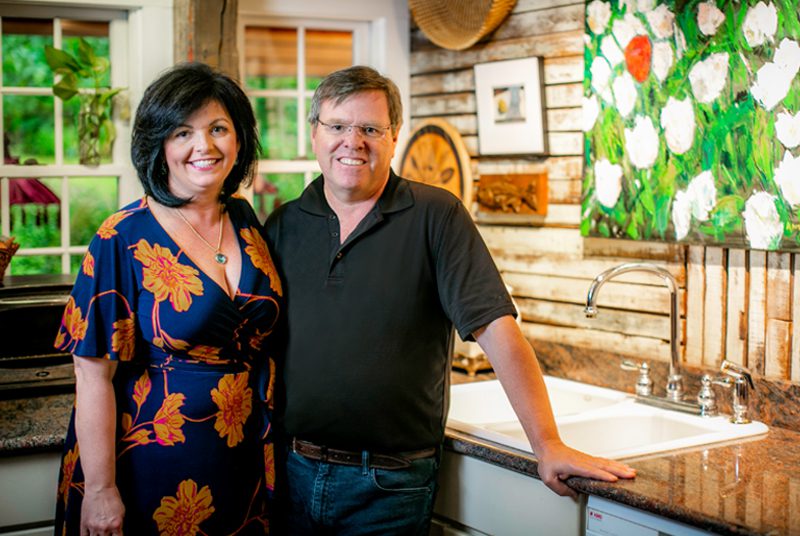 They both hope to make a visit to Mendez Studio more personable. “The house tour felt good,” Dee Dee says about a recent event that gave visitors an opportunity to get to know them as people, not only as an artist and a small business. A recent studio tour did the same thing, giving them an opportunity to connect with the community at large, and they’re investigating opportunities for public work, as well.

For the time being, he works from the same studio in the hills of Knoxville that he’s always worked in, letting this place both motivate and inspire him. The legacy built by Mendez is evolving. “My hope is to keep the torch lighted, to keep his [Tony’s] spirit, which is so much a part of this place and the land around it, alive for all who visit,” Toby says.

What happens next will evolve over time, but it will remain a tribute to the Mendez family of artists, and hopefully the launchpad for the next phase of Toby’s ever-expanding career.

For more information about Toby Mendez Studios, go to www.tobymendezstudios.com.