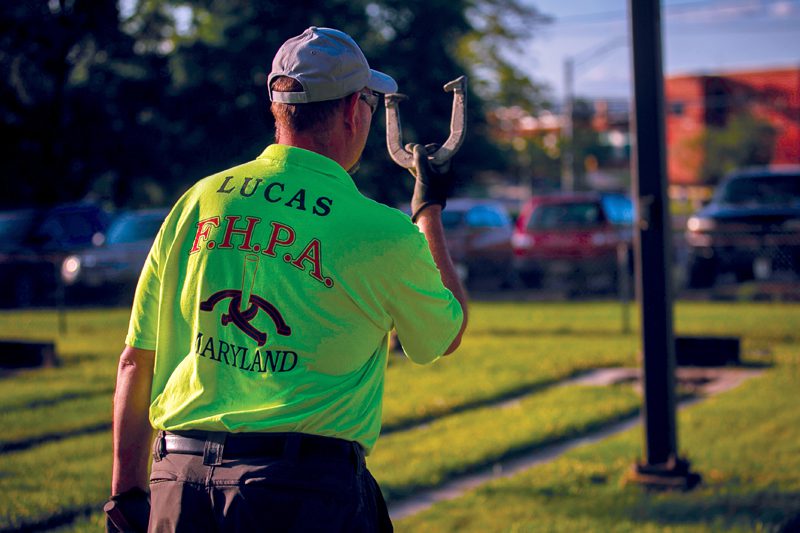 Jack Moxley, also known as “Pops” because he’s 88 or “Hay Slinger” because he was a farmer, has a tried and true way of pitching horseshoes. “I grab the shoe by the hind leg,” he says, a broad smile across his face. Adding to his joy is the Frederick Horseshoe Pitchers Association’s opening day at Maryvale Park, located off West Patrick Street.

The setting sun is a welcome change after a spate of rainy days that caused the grass between the courts to grow way past ankle height. Bleachers stand ready to be filled with spectators once the sanctioned tournaments start again. But on this night, everyone is primed for practice, testing the focus of their eyes, their timing and getting the swing of their arms moving just right to produce the gratifying sound of metal on metal.

“I have a grass-and-sand court at home, but nobody to pitch with,” says Moxley, whose wife, Jessie, is seated at the registration table rather than on the courts. “Practice [by yourself] does help, but it’s good to get out there with other people.”

Horseshoe pitching has long been the staple of family reunions and backyard summer picnics, which is how Brian Lucas, president of the Maryland horseshoe organization, became hooked. “I learned from my dad who learned from his dad. It’s a family tradition. My son has been pitching since he was 7 and he’s 20 now.”

According to the National Horseshoe Pitchers Association, when metal shoes were first nailed to horses’ feet, as early as the second century A.D., people were using them in games. Camp followers of the Grecian armies reportedly couldn’t afford the discus that wealthier sportsmen threw, so they substituted horseshoes, adding a stake as a target. In 1869, the British established rules for the game and in 1910 the first international competition was held in Bronson, Kan. Today, the NHPA has about 15,000 members, according to its website.

More than 135 people belong to the state association, says Lucas, with the Frederick group fluctuating between 30 and 45 enthusiasts. Attendance during the season often depends on members’ vacation plans, he says.

A sign identifies the courts as the Esterly-Keilholtz Horseshoe Pitching Complex, named after Newel Esterly, who donated the land, and his friend and fellow player Glenn Keilholtz. “The deal was that the land would be donated [to the city] if they put in courts,” says Lucas. The complex, with 16 courts, opened in 1981 and has been a magnet for players not only in Frederick, but also drawing from surrounding counties and states. They are the only sanctioned courts in Frederick, although there are other places to play, including at the Moose Lodge on East Patrick Street.

The Maryvale Park courts boast lights for nighttime action. Blue clay is used around the pegs as opposed to sand. “It’s a little softer,” says club president Joe Payne. “If it’s sand, they flip around. With clay, the horseshoes are not flying here and there.”

People with all skill levels are invited to join and there’s a mix of older and younger players, women as well as men. Lucas, who teaches in Clarksburg, once did an after-school club with horseshoes and would like to see more kids compete in the sport. “I taught them the rules of the game and their eyes lit up when they actually got out there and threw, getting some exercise as opposed to sitting down at a screen and playing video games.”

The NHPA’s official rules fill eight pages, starting with the proper way to lay out a court. The area needs to be 6 feet wide and a minimum of 46 feet long. A pitcher’s box is at each end of the court and includes the pit where shoes are supposed to land. The horseshoe itself cannot weigh more than two pounds, 10 ounces, and just like with bowling balls, players own their own shoes.

The game is played in innings, each one consisting of four pitches, two per player. The desired outcome is for ringers—when the shoe comes to rest encircling the stake. That’s three points. A shoe in count, which is not a ringer but rests with any portion of it within six inches of any part of the stake, is valued at one point. There are some interesting quirks to the game, such as counting all the ringers and shoes in count, or instead using cancellations where no one gets any points if both players score ringers.

Keeping everyone’s stats and figuring out handicaps to better match players is the job of Diana Ratliff, secretary and league director as well as the secretary/treasurer for the state association. Her job also includes giving the “etiquette speech” for how the game is conducted—no foul language is one caution—as well as housekeeping duties such as calling the city to get the grass mowed.

“I do pitch, but not very much. I don’t have a lot of time,” she says, looking up from her paperwork spread across a table. When she does play, “If I get a ringer, I hoot and holler.”

When Ratliff joined in 1989, she was the only woman in the crowd “of dear, sweet men who would say, ‘Don’t do it this way, do it that way.’” She recalls getting a sportsman award at the annual banquet because she stuck with it.

“This is a treasure in Frederick. Nobody knows it’s here,” she says of the courts and the people from all walks of life who show up to pitch. Jessie Moxley agrees. “They’re like family. Everyone comes in and we have a good time.”

Sometimes there’s a little romance mixed in. Joe Payne met his wife, Ashley, at a horseshoe tournament and they have continued sharing the sport, right down to the matching horseshoe tattoos on their lower legs. “I’ve been playing since I was four,” Joe says and the couples’ 18-month-old daughter already has her NHPA membership card.

“First, it’s the people,” he says. “Next, is the competition.” Looking over the courts, he says he has noticed that there’s usually a continual breeze blowing through the park. “But at 7 or 7:15 the wind stops,” the shoes start flying and the clang of metal can be heard down the street.