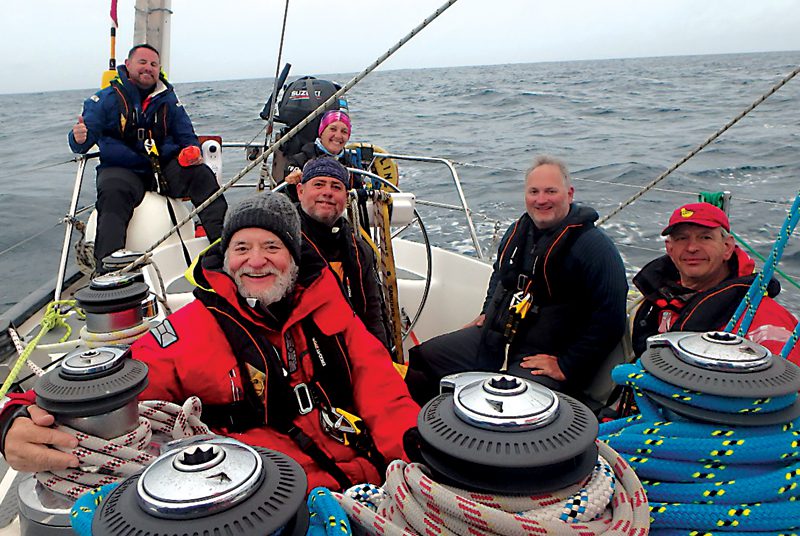 Through Heavy Seas and Without Modern Navigation Technology, Earl Mullins Took his Fears on a Transatlantic Sail

Earl Mullins always had a bit of fear of the water, probably the residue of having almost drowned twice before the age of six. But you would never know that history by the way he lights up when talking about sailing the open sea. Or by the fact that he once received his certification in scuba diving.

For the 74-year-old Brunswick man, life is all about the thrill of doing the things that scare you the most.

“I have always loved doing adventurous stuff,” Mullins says with a slight smile and a twinkle in his eye. “I think everybody should try and do something that scares them a bit, at least every couple of years. For example, why does a 74-year-old man choose to go on a transatlantic sail by only celestial navigation for 4,708 miles?”

Mullins’ story with the sea began 20 years ago when he was introduced to sailing through friends. It was love at first gust. “I didn’t grow up around the water. I didn’t grow up around boats. I really had no experience on the water until I moved to Maryland, but it was just one of those things where you do something, and you just love it. I immediately had a passion for sailing,” he says. “There’s something about when you’re on the water and there’s this connection between you and the wind and the sail and the water, and you just have these times when everything kind of comes together, and it’s just a wonderful feeling.”

While he has spent much time sailing the Chesapeake Bay, inspiration to do an open ocean sail struck Mullins after closely following the recent 2018-19 Golden Globe Race, a solo, nonstop circumnavigation sail using boats under 36 feet. Last year marked the 50th anniversary of the original race and 18 sailors took part.

Like Mullins, one of the race’s top competitors, Jean Luc Van Der Heede, was 74, and if that wasn’t enough of a sign, he even shares the same exact birthday as Mullins: June 8, 1945. “It just blew me away because the guy was my exact age, sailing around the world, and he was 1,500 miles ahead of the next boat. Some of the best sailors in the world signed up for that race and I just got obsessed with it,” says Mullins, who tracked the race online. “I have always dreamt of making a transatlantic sail, and the universe just seemed to be calling me.”

“I’m getting older and I’m realizing that when you look back at your life, it’s not what you’ve done that you regret, it’s what you haven’t done,” says Mullins. “So, I started thinking, What have I not done that I’ve always wanted to do? I have always had this fantasy of doing ocean sailing and sailing in what they called ‘heavy weather.’ Could I do it? How afraid would I be?”

He decided to find out.

Mullins came across a transatlantic sailing challenge led by Rubicon 3, a sailing adventure expedition enterprise headquartered in Portsmouth, England. He immediately expressed his interest and began training three times a week at the gym in preparation for the voyage.

“It was the whole adventure of it,” Mullins says on why he decided he wanted to participate in the sail. “The whole idea of being cut off from everything and just reconnecting with nature and the sky. I wanted to know what it would feel like to be in the midst of a vast ocean and experience life in a way that is almost primitive and raw. Ultimately, it was a way of testing myself.”

His journey officially began on March 26 in the Caribbean island nation of Saint Lucia. He joined a crew of eight aboard a Clipper 60 cutter sailboat named Starling. Also aboard was one professional transatlantic sailboat skipper and a first mate in training to become a skipper. “Each of the crew, myself among them, were making not only our first ever transatlantic sailing trip, but we were making it without the use of GPS, navigating solely by sun, moon, planets, and stars using a sextant and ocean charts.”

Thus, each crew member had to learn celestial navigation.

“Celestial navigation is an ancient art, and in the days of GPS it has been a dying art until recently,” says Mullins. “The United States Naval Academy had dropped it from the curriculum, but recently have decided that it was important to bring it back. If all the electronic tech stuff goes out, we can always still find out where we are and how to get to where we want to go, safely. That is not a small skill in sailing, or in life.”

Mullins says that while the trip was a once-in-a-lifetime experience, there certainly were a few “waves” along the way, from nearly running out of fuel to hitting multiple strong-wind gales—one strong enough to shred the mainsail—to having to sail more than 1,700 miles of the voyage with a broken engine.

During one of the stronger gales, as Mullins made his way to the cockpit to begin one of his daily watches, he says the sight before him was awe-inspiring. “I had never seen anything like it before in my life. The entire sea was covered in beautiful white foam. There were streaks of snowy foam being flung from the crest of the waves. It looked like the French Alps in winter. The wind had dropped … and it was wild and beautiful. And the waves were huge, nearly 40 feet high,” he describes. “Then, I looked behind the stern and rolling toward us was a huge wave that was at least 30 feet high, three times the height of a basketball goal. It lifted itself above us at a 45-degree angle, and then I realized that these were not breaking waves, but that they were swells. It merely lifted the boat up and over the sea of waves and foam. It was like being atop a Ferris wheel. It was glorious. I will never forget it. It was as though I was being lifted above the entire ocean, yet still connected to it. A sense of calm and peace and beauty came over me.”

And it was in this moment that Mullins realized that somewhere along the way from Saint Lucia to Antigua to Bermuda to The Azores, he had lost his fear. “Mysteriously, magically, during that … storm in the middle of the Atlantic Ocean, I had lost my fear of the water,” he says. “I was never truly afraid any time during my 4,708-nautical-mile sail. Just one day of what we call beautiful ‘champagne’ sailing weather makes you forget all of the storms and the times you are becalmed.”

Mullins says the journey also provided plenty of time for pondering. When you’re out in the middle of the ocean with nothing but the sound of the waves and the stars in the sky, it’s nearly impossible not to think about your life or the things that are important to you in it.

“There is something about when you’re out there, you just feel really alive. But when you’re alone, essentially, there is a way of being alive that if there’s anything in your life that you’re avoiding, you can’t avoid it out there,” says Mullins. “I went on the trip really to experience what it felt like to have everything stripped away, including the things that I love.”

But with the absence of those things, the sentiment for them grew. “The thing that became really clear to me while I was away, that was almost overwhelming for me, was how much I love and how much I am loved by some of the people in my life. You take it for granted sometimes but I just saw how much my wife loves me, how much my children love me, how much my friends love me. It was so overpowering that I sometimes find myself weeping thinking about it,” Mullins says. “If you can see your life as a sea that you’re sailing through and you can truly envision all of that love, you realize that you can deal with all of the other stuff. I think most people forget that they’re loved.”

He completed his voyage, arriving in Portsmouth, England, in mid-May and was actually the only original crew member on Starling to do so. “At the end of our voyage, they dubbed me the ‘Earl of Starling,’” Mullins says with a chuckle.

Upon arriving back home in Brunswick, he says he viewed his own boat and sailing in a new light. “For the first time in my life, I felt like I could get into my 32-foot Bristol and I literally could sail into the ocean or down to The Bahamas without any fear—and I’ve never felt that before,” he adds. “I’m just so glad that I went. I learned so very much about sailing, and even more about myself.”

So, only one question remains: What’s next?