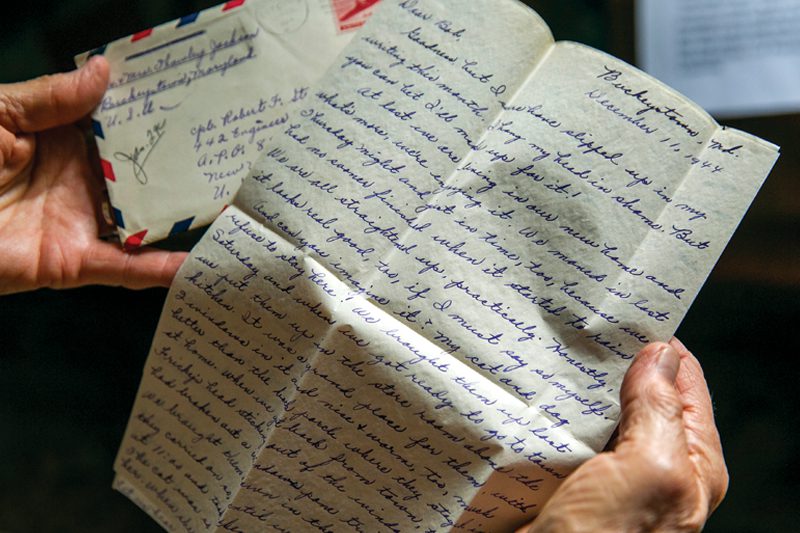 It began with a wooden box filled with old letters written during World War II, and it started Nancy Bodmer’s quest for answers.

Bodmer is the current undisputed historian of Buckeystown. “I’m curious, an old soul, and all about the past. That’s what drives me to find out more about the people and this town,” she says. She is visibly entranced with anything relating to the town and its long, rich history. She’s written three books on the subject and, while still maintaining her pottery business, Nancy Bodmer’s Pottery, will happily take time to delve into yet another facet of local lore. “I had no roots growing up, so Buckeystown has been my hometown for the past 47 years,” she adds.

“It appears to be handmade,” she says of the box that contains 362 letters sent to Bobby Strailman, one of the two local Strailman brothers who went off to fight in World War II. The brothers both served during the D-Day invasion of Normandy but were not in France at that time. The box was mailed back home from Paris in 1945, and Bodmer feels “that it makes sense that [Strailman] made it since he’d worked as a carpenter.”

It came to Bodmer’s attention in September 2018 when Charlie Abrecht, the postmaster of Buckeystown, called her about a box he’d received from Elizabeth and Nicholas Barranca of Ijamsville. Elizabeth Barranca is an avid collector and scours eBay for vintage handwritten correspondence. Several years ago she had purchased the box and its contents online and then decided that because of their rich historical details they should be returned to the community.

To Abrecht, Bodmer was the most logical person to care for the box and its letters, and the person for whom they would have the most meaning.

He was right. She was thrilled. “I started reading them and they revived my interest in that period of the town’s history. I have written about all these people [who wrote letters to Strailman] in my books,” she says.

What Bodmer gleaned from the letters is a greater appreciation for the warm connections between the families in Buckeystown and a real sense of what day-to-day life in town was like as they scaled back every aspect of their lives to support the war effort. And as she read them, she reflected on the lost art of letter writing, the personal effort it took, the craft of cursive penmanship and the emotions that were shared and sometimes softened so as not to worry a loved one too far away to help.

Local updates filled the letters: who was getting engaged and married, who attended church services, and all were peppered with words like rationing and victory gardens that were part of the war-era lexicon. Some of the most poignant excerpts were culled by Bodmer from the dozens written to Strailman by Harriet Bell, wife of Guy Bell, for whom he previously worked:

July 1943: “Guy misses you very much on the job. There is lots of days he has to work most of the day by himself. We are still praying and hoping you will never have to go across. I pray every day that God will very soon see fit to stop this war.”

November 1943: “Your mother and father were at the dedication of the service flag erected in the center of our town today.”

December 1943: “Well Christmas is over for another year and we are hoping and praying that long before Christmas comes around, this terrible war will be over and you boys will be home again and may God see fit that all of these boys that our service flag stands for will return home.”

June 11, 1944: “I sure do wish I could hear from you real soon saying you are all right … We surely are anxious people back here especially since the 6th of this month [D-Day].”

Aug. 26, 1945: “Guy is working every day unless it happens to be a rain day. They’re talking about working only 5 days a week since lumber is so scarce. Gas rationing is all off now. The cars will be traveling now as long as the tires hold out anyway.”

The letters by no means reflected all the sacrifices on the home front, rather they were chatty “filled with gossip” says Bodmer with a knowing smile, “and written to buoy the spirits of someone everyone knew.” Bodmer has divided the letters into groups by senders’ names, so she has a sense of the relationship between Bobby and the sender, and she can keep track of the various threads of conversation between them.

A news article in The Frederick Post dated Feb. 2, 1945, recounts a reunion of Strailman with his brother John in France. In it, excerpts from a letter written by Strailman to his parents make reference to “an almost breathless account of the 3 days during which the boys saw as much of each other as Army regulations would permit and even had the opportunity to tour Paris together.” It was the first time John saw anyone from home since entering the armed forces in December 1942. Bobby, who had been overseas since September 1943, “has been luckier in this respect, his mother said, because three other local boys Hugh Clem, Austin Baumgardner and William Dosh have accompanied him on every lap of his military entourage …,” according to The Frederick Post piece.

When Strailman returned home, he became a mail carrier in Adamstown, settled in the area and married Mary Plummer in 1949. “They had no children and no living relatives, so when she died in 2014 (he had died in 2011) the contents of their house were auctioned off and some things including the box ended up on eBay,” Bodmer explains, “and that’s how they came to be in the hands of the collector.”

Still there are questions. Where exactly did he serve? Why did he never come home on leave? Who might have some letters from him? Bodmer plans to keep researching to find the answers to these questions, feeling “that he’s with me pushing me along,” although conceding some answers might be lost to the ages. She rotates a display of several of the letters in the Buckeystown Post Office on a monthly basis, just to share what she treasures with the community.

Bodmer is more than happy to talk with anyone knowing more about Bobby Strailman, his brother John and their time in the military during World War II, or the history of Buckeystown in general. She can be reached at [email protected]