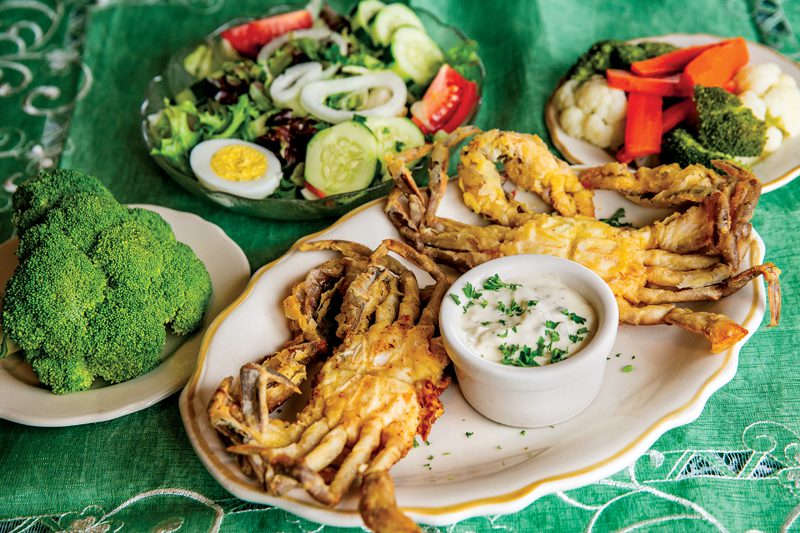 Restaurants come and go. Tastes change. Economies slump. Life gets in the way. Roughly half of all businesses reach their five-year milestone, according to the U.S. Small Business Administration, but food service is notoriously fickle. That’s why it is even more impressive that the Shamrock Restaurant in Thurmont is still rolling along, long past its 50th anniversary.

Founded in March 1963 by Donald “Mike” Fitzgerald, it’s a hometown landmark in brilliant white and green along U.S. 15, between Gateway Candyland’s sugar extravaganza and the bounty of Catoctin Mountain Orchard’s seasonal fruit market. The road, now a well-traveled thoroughfare, was just two lanes when Fitzgerald took over an abandoned dance hall and turned it into a restaurant.

From decay and debris, he remade the place as his own. Bedecked in its signature Shamrock motif, Fitzgerald’s Irish roots are clearly evident, intertwined with fierce American pride. A diminutive Statue of Liberty greets customers, a mini “Mother of Exiles” lifting her lamp for those yearning to breathe free … and eat crab cakes. She stands with Celtic crosses, angel figurines, a memorial pin oak and a crowning 28-by-40-foot flag that unfurls in the breeze 80 feet above the lot. A signpost notes the way to the dining room and separate Blarney Pub entrance, as well as to Thurmont, Limerick or Donegal, in case guests get turned around in their travels.

A second and third generation run the Shamrock now, and every inch is filled with family memories. Beyond a cluster of shelves and display cases proffering imported Irish treats and themed gifts at its entry, the dining room feels like a cozy cottage, complete with floral chintz and ivy wallpapers, traditional Irish linens with embroidered touches and a dominating stone hearth. Light spills through large windows that showcase serene farmland and distant rolling peaks, twin hallmarks of Frederick’s enduring rural beauty. Clusters of silk and natural shamrock plants line the window sills. Tabletop displays change regularly; they might feature the family’s collection of Irish postcards from the early 1900s, printed quips or Irish-themed maxims, which will all sport red, white and blue for the Fourth of July.

On either side of the mantel hang family treasures. To the left is an original creation by local artist Rebecca Pearl. It’s a fine likeness of the restaurant, but three people in the foreground draw the eye. They are Mike, who passed away in 2016 at age 85, and two grandchildren lost to separate tragedies. To the right, a large vintage photo captures the Fitzgerald clan, arrayed in classic 1970s fashion: Mike and his wife/high school sweet-heart, Doris, and children Donna, Dennis, Dawn, Diane, Debra, Daniel, David, Darrell and Dean. In the cloistered bar, Mike’s massive hunting trophies stand sentry, in stark, rustic contrast to its genteel counterpart.

Daughter Dawn Knox is happy to share some family history. She grabs a pamphlet from a nearby table, created in homage to her father. It includes photos of him and his four brothers from the 1940s and the home he built by hand from chestnut logs and Roddy Creek stone. She motions to the family portrait. “All nine kids grew up working here.” Eight still live nearby.

She says that her father’s parents, Allen and Naomi “Mom Fitz” Fitz-gerald, led the way for the next generation to become involved in food businesses. They ran a gas station on old U.S. 15 that struggled through lean years just after the Great Depression. They sold ham sandwiches to attract additional customers and quickly earned a reputation for good food. The early experience inspired four of the five Fitzgerald boys to grow up to be restauranteurs.

Naomi helped Mike adapt original family recipes for the restaurant that are still used today. Their fried crab cakes are gift-wrapped in a crunchy shell to hold together delicate, minimally seasoned chunks of sweet crab. Guests may opt to have them baked. Either way, the family is proud to note there is no filler in them or the crab imperial. There is hot crab dip and crab puffs, “Krabby” salad and soft-shelled crabs from Maryland’s Eastern shore. Other seafood offerings play with the bounty of northern waters—Icelandic haddock baked with “a wee bit” of butter or fried with chips (fries), organic salmon from Scotland marinated in Irish whiskey or plump oysters from Puget Sound.

From the turf, the Shamrock’s slow-roasted prime rib of beef is a consistent favorite, too. It’s served in 12- or 16-ounce portions. Flavors of Ireland creep onto the menu in the form of simmered Irish lamb shank, a meaty bone bathed in veal demi-glace with vegetable and orzo. The classic shepherd’s pie is tender lamb and root vegetables with sweet peas and corn under a blanket of mashed potatoes. There is corned beef and cabbage, peel-and-eat shrimp steamed in Magners Irish cider, or Irish “nachos” with Guinness-braised corned beef and cheese piled on sliced potatoes.

Dinners include the salad bar, a colorful mix of house-made treats, including sister Donna Demmon’s recipe for curried olives, Fitzgerald family-style creamy potato salad and macaroni salad that finds the right balance between savor and tang. Don’t miss the freshly baked bread just past the pickled beets. It is soft-as-a-cloud in nutty wheat, white or flecked with colorful vegetable bits. Sometimes it’s dusted with Italian herbs, sesame seed or poppy, at the whim of the baker that morning. The kitchen unveiled a new bread recipe this year, a dark brown pumpernickel made with currents and Guinness. It’s used for the Shamrock’s roast beef “bap” (sandwich/bun in Ireland). Bread and other baked goods are also available to go.

Donna also created a creamy Guinness sauce recipe that can be paired with the all-you-can-eat mussels. It is one of the newer selections tiptoeing onto the menu alongside old-school delicacies such as seasonal spring shad and bacon-accented shad roe.

Just as everyone can be Irish on St. Patrick’s Day, the Shamrock restaurant is an ebullient celebration of Irish-American culture, not matter what the calendar says. This year, on the 17th of every month, patrons can revel in “St. Patrick’s Déjà Vu,” with special foods and live music. From the gift shop, guests can swathe themselves in Celtic jewelry and cozy Connemara knitted socks, take home Bewley’s or Barry’s signature tea blends or pick up a keepsake gift for the páistí (Gaelic for “children”). Generations of local fans would love a peek at the bialann’s (restaurant’s) recipes, too, but those are closely guarded secrets.

Dawn shakes her head and ventures a teasing smile. “Maybe someday we’ll write a cook book, but it won’t be anytime soon,” she says. Until then, the Shamrock crew is happy to do the cooking, offering céad míle fáilte, a hundred thousand welcomes, to friends old and new.