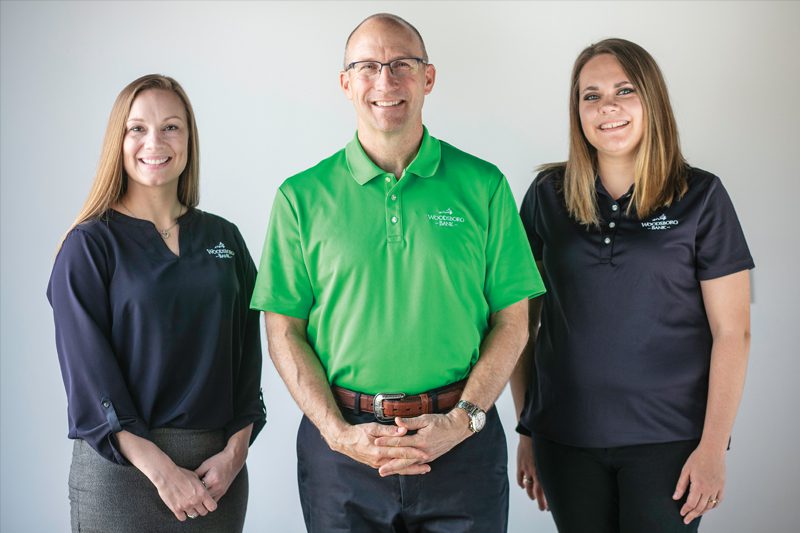 Every year, United Way of Frederick County selects the winners of its annual BRAVO! Awards, honoring individuals and organizations donating their time and money to the community. The choices aren’t easy. “It’s a total struggle,” says Ken Oldham, United Way president and CEO. “It is really hard.

We have so many organizations and businesses and individuals that come through our doors. It is really, really difficult.”

This year, six awards were presented to four businesses and two nonprofit agencies as a way to recognize their ongoing efforts and partnership with United Way. “It is really, really important to us to acknowledge the volunteers who come through our doors,” Oldham says. “We have superstars that appear every year and it is important that they are acknowledged for their efforts.”

Woodsboro Bank CEO Steve Heine has personally and professionally supported the United Way since he started his banking career in the 1980s. When he joined Woodsboro in 2017, the bank had already been hosting workplace campaigns to benefit United Way since 2011, with an average participation of $237. Heine knew the role the United Way plays in the community, so he wanted the bank to be more active.

“The approach we took was that participation was our first objective,” he says. “We set a goal that this was all about participation versus everyone giving a certain dollar amount.” Participation in the workplace campaign rose to 29 percent during Heine’s first year—a 1,000 percent increase—but Heine knew the bank could do better.

Two colleagues were assigned to be campaign coordinators and held informational meetings in every department, engaging with each employee to discuss the importance of the campaign and re-enforce that any amount given was appreciated and needed. Contributions last year increased to 78 percent. “We believe it is important to be something bigger than just ourselves and we know that something bigger is our community,” Heine says. “It is important that we give back to the community in our time, talent and treasure.”

Spirit of the Community Award

Oldham notes DARCARS was one of United Way’s superstars last year and was a worthy recipient of the award designated to those exemplifying the spirit of giving back. The automotive group gave $10,000 to the United Way’s Stuff the Bus campaign that provided more than 7,700 students and families with school supplies before the start of the academic year. The company is committed to helping children, including participating in other programs such as Blessings in a Backpack, so being a part of the United Way school supplies campaign was an easy choice, according to Jason Waltrup, DARCARS general manager.

During United Way’s annual Day of Action, which helps to address challenges in the community through a wide variety of volunteer projects, DARCARS not only donated $7,500 but also sent about a dozen staff to participate. They helped build steps and painted an apartment for a person in a transitional program. “It is impor-tant to just get everybody out there and see what it is like on the other side and what the money is being used for,” Waltrup says.

Staff sacrificed work hours from their commission-based jobs because they believe in the importance of the United Way’s mission. “We like the message that [United Way] offers and the people that they are able to help, and we love to be able to keep our money local here in Frederick,” Waltrup says.

As a critical part of the nonprofit infrastructure in the community, the Mental Health Association of Frederick County’s 2-1-1 hotline is the recipient of the Community Impact Award. Be-stowed to those having a large impact on Asset Limited Income Constrained Employed (ALICE) households that operate above the federal poverty line but often cannot make ends meet, Oldham says the emergency assistance information line “is perhaps among the best-kept secrets [in the county]. They do incredible work.”

Operating 24 hours, seven days a week, 2-1-1 offers resources for a wide variety of services, ranging from basic human needs and financial support to mental and physical health services, including suicide prevention. “I think it is a good resource because the information that we provide has been checked out and verified before it is something we provide,” says Suzi Borg, director of community support services for the Mental Health Association.

Borg also notes when someone calls in for help, staff gather information to find out what help is available, such as not being able to pay for childcare. While there might not be a resource to pay for it, in talking with them, staff might be able to find resources to help in other ways. “We talk through the need so it’s not just getting a name and a number,” Borg says. “We also do follow-ups to make sure people are able to get connected to the services they need.”

With 320 volunteers partaking in United Way’s Day of Action last year, the annual event reached record-breaking participation with nearly half in attendance being Wells Fargo employees. “They have done a remarkable job of volunteerism over the years,” Oldham says. “… They really focus on volunteerism.”

Tara Fredrikis, account management supervisor, has been with Wells Fargo for nine years and participated in the past two years of Day of Action. She says the event is great for team members because the projects are different every year. “Both locally and collectively, it gives us the opportunity to have a positive impact on society and our community, while representing different Wells Fargo divisions/ entities,” she says. “Our commitment to being a leader in corporate citizen-ship is very important, which is why we focus on activities that will build a better bank and strengthen our company for the future.”

A partner with United Way for more than a decade, the bank also collected supplies for the Stuff the Bus campaign and sent volunteers to help with pick up and sorting supplies.

Wells Fargo supports employees with their desire to give back by providing employees who work 30 hours or more a week with up to 16 hours of paid leave for volunteering. Employees not only give their time but their money, too, as Wells Fargo Frederick employees annually give more than $200,000 to the United Way Workplace Campaign.

One of the strongest partnerships United Way has is with the Housing Authority of the City of Frederick. The two joined together five years ago to open Prosperity Center, a one-stop resource for residents to advance their financial knowledge, skills and stability through a wide range of services, including free income tax preparation, fiscal coaching and prosperity savings accounts.

Twenty percent of those referred to the center are Housing Authority clients. “The Prosperity Center gives the people we work with more tools to find a way to wealth and to reduce their struggling,” says Ann Ryan, Housing Authority’s director of Family Services. “… The center helps to manage the funds they do have in a way that is going to create stability for their families.”

The Housing Authority was named the recipient of the Outstanding Advocate Award because the agency supports sustainable solutions to tough challenges in the community.

“The United Way reminds us that there are people left behind and out of the equation when we are talking about a thriving Frederick,” Ryan says. “All of these partnerships with the United Way helps bring those families into the fold. There is a way we can all thrive together, and the United Way keeps reminding us of those ways.”

The Delaplaine Foundation is the first commitment that the United Way receives to its Unity Campaign every year. “They are among some of the strongest advocates,” Oldham says.

Marlene B. Young, foundation president, notes United Way represents everything for which the nonprofit stands. “Our mission is to support organizations whose programs and services enrich communities and families and that really is what the United Way is all about,” she says. “… The Delaplaine Foundation takes great pride in being a leading founder in the community to partner with the nonprofits in providing these critical services. What I really appreciate about the United Way is they use data-driven statistics to develop programs. They are using the head to come up with programs that serve the heart of the community.”

Not only is the foundation a long-time incentive donor to the United Way but its chairman, George B.

Delaplaine Jr., is a Tocqueville Society donor, which is the highest level of leadership giving offered by United Way. “We have always seen ourselves as a good corporate citizen and now we perpetuate that giving back to the community through the foundation,” Young says. “We want to continue to be a leader to encourage others to match our support or to work toward those same goals for providing long-term benefits and measurable results for communities and families.”