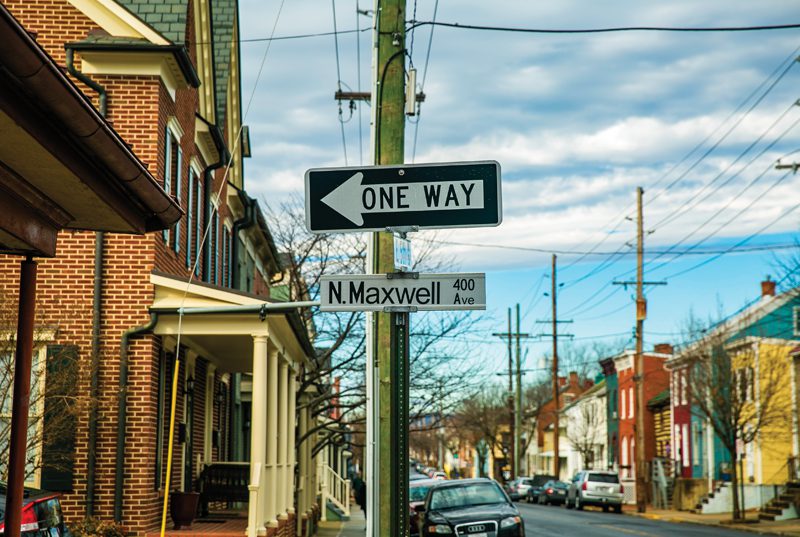 “I just got here” is a phrase I think I’ll be uttering a lot these next few months as a recent transplant from the southern capital of hip-hop and tea sweet enough to take your money, Atlanta, Ga. A chef in a comfortable kitchen of his own gives it all up after a decade and follows satellite-launching (no, seriously) wife up to the land of blue crabs and Terrapins: Frederick, Merryland.

It’s been a whirlwind. Last fall, I had no idea we wouldn’t be in Atlanta for the Super Bowl, which I had been looking forward to for years now. I had no idea I wouldn’t be cutting grass or pruning my rosemary garden for winter, or what passes for winter in the Peach State. One day I’m standing in the kitchen, mixing up streusel topping for my cinnamon coffee cake with two glazes (every yin needs a yang), and I get a text from my darling …

“I just got recruited for my DREAM JOB by an awesome satellite company!!!! They’re flying me up to interview on Friday!!!”

That day was Wednesday.

I stood there with streusel on my hands, half-thinking about whether I needed to add more butter to get it to a moist, sand-like consistency, and the other half thinking, “Fly you up where?” in a cassia-induced kind of daze.

She got The Job. She told me Frederick was going to be the next stop on our journey. This shouldn’t be too bad. New markets and restaurants popping up. Historical. Seems foodie. We will be living Downtown, so it should be easy to meet new people. Maybe something different is what you need after cracking your knuckles for 28 years in kitchens across America.

Six weeks later and I’m walking the dogs around Downtown, getting to know the cavalcade of one-way streets, barber shops, and olive oil emporiums. Some of the menus weed themselves out after a three second glance as the black Lab yanks me around another janky metal sidewalk grate. It left me wondering, how to find that good-good?

It helps that I’m known to be easy-going, friendly in an unobtrusive way, eager to engage strangers about their various rock T-shirts or appetizers. I love learning little bits and phrases in many languages to help relate to many different people, and I have a smile that has been described as “disarming.” My wife sometimes gives me a little pinch on my bingo-wing to get me to let other people get on with their day.  I’m a talker. I get it from my mama.

Walks through Downtown revealed that the people of Frederick, Md., were friendly, but cautious. My southern habit of saying “good morning” to everyone I met was returned with a mix of replies in the affirm, and suspicious glances. But overall the vibe on a wind-strewn late morning into early afternoon was positive, and sunny. Save the random dude yelling at the sky to please return his sweatshirt.

I started to think about what the average resident of Frederick thinks about the local sandwich place, the Asian-noodle spot, the new trendy taco place, the antique shop that smells old-timey? What places do they like? Where do they call when there’s nothing in the fridge? What places have Frederickers forgotten about? Like the holes in the dry-wall your college roommate punched for no reason, postered over and never mentioned again?

So, a bit of your patience native Frederickers (Is that what y’all are called? Do y’all even say “y’all”?) is hoped for while I discover your so-far-welcoming ’ville for the first time.