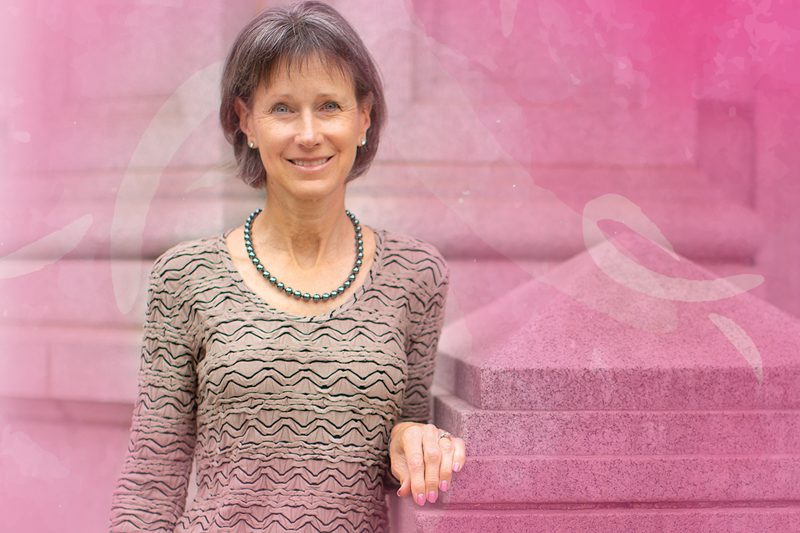 Sitting in a Baltimore hotel room with her husband, Jeff, hours before she would have surgery for breast cancer, Patty Hurwitz wished she could be home in Frederick. Diagnosed during her annual mammogram in August 1999, Hurwitz had to go to Mercy Medical Center for treatment including surgery, post care and reconstruction because Frederick had no surgeons or a program dedicated solely to breast cancer. “It was really hard,” she recalls. “I was 44 years old. I had children still at home. It was really hard to be going down the road back and forth all the time.”

Though Mercy had and still has an impressive comprehensive breast cancer program, she didn’t want to travel. “I thought, ‘We need to have that here in Frederick,’” she says. “That night [in the hotel room] I was just thinking, ‘There must be some way we can start to raise some money for a fund.’”

The couple, who own Colonial Jewelers in Downtown Frederick, decided to establish the Hurwitz Breast Cancer Fund at Frederick Memorial Hospital (now Frederick Regional Health System) in order to raise money for innovative technology targeting early detection and treatment. Celebrating its 20th year, the fund has raised more than $1.8 million with a target of reaching $2 million by the end of December. “When we first started this fund, we had no idea where it would go and who would contribute to it and the interest it would generate,” Hurwitz says. “Everybody knows somebody who has had breast cancer. … It’s something that touches everybody, so I think it is a cause that people can really relate to and naturally want to help.”

CAD and 3D mammography systems have become a critical part of screening and prevention at the Center for Breast Care at the hospital’s Crestwood Boulevard facility. The new machines, which replaced 2D mammography, were purchased several years ago from contributions to the Hurwitz Fund. Radiologist Dr. Peter Kremers notes the upgrade allows for a higher rate of detection of significant invasive cancers and reduces the need for additional images with associated costs and radiation exposure.

“It’s like you are peeling back the layers of an onion and looking at each individual layer as opposed to having to look at the whole onion,” Kremers says. “If you bury something in the middle of it, you may not see it, so that’s the main reason that 3D has a higher rate of cancer detection. It is not as subject to overlying dense breast tissue as is a standard 2D image.”

Breast surgeon Dr. Susan Bahl notes she could not run her practice without 3D mammography. “Radiology and my practice [are] completely intertwined,” she says. “… If you can catch a cancer at 4 millimeters on a 3D [machine], clearly you are going to need less surgery, typically, less advanced treatment for the patient, less chemotherapy, less radiation and really overall less surgery if you catch cancer early. The patients really benefit from this because they don’t have to go through excessive surgery, excessive treatment, extensive follow-up and surveillance if I am able to catch their breast cancer early.”

Within the last year, the fund also purchased machines placed in the hospital’s operating room that allow staff to X-ray breast tissue as soon as it’s removed from the patient. “We are able to visualize the piece of breast tissue and the architecture and how much we have taken out,” Bahl says. “We are able to decide if we need to take more tissue. It improves the accuracy of our surgery. It improves the precision of our surgery and it also reduces the time that the patient is on the operating room table.”

Previously, surgeons would remove the tissue from the breast and staff would walk the sample down to radiology in a separate area of the hospital. There then could be a wait for an available machine to perform the X-ray. After printing out a picture, staff would bring the image back to the operating room. “You can imagine the time loss, the lack of efficiency and the lack of precision,” Bahl says.

The fund also purchased software that helps radiologists detect abnormalities such as suspicious masses or clusters of calcifications when reading mammograms. Kremers notes the software “gives us a second look, if you will.”

Frederick Regional Health System was also one of the first in the region to purchase—thanks to the fund—curved comfort mammography paddles. Instead of using flat paddles, “the curved pad used during the course of mammography makes the exam much more comfortable, and because it is more comfortable there is less motion and increased accuracy with no blurring,” Kremers says.

Additionally, the fund has paid for a healing space at the Center for Breast Care and a medical oncology suite at the James M. Stockman Cancer Institute. “Because of all these advancements that the Hurwitz Fund has provided to us, we are able as a breast center to provide comprehensive, coordinated, cutting-edge care for patients,” Bahl says.

Kremers, who also serves as the fund director, notes staff looks at the most promising advancements in technology in terms of being able to increase cancer detection, while lowering radiation exposure and costs, when discussing what to buy with the funding.

“The money is being used wisely,” Kremers says. “It is helping us detect cancers at the earliest possible time and with the least amount of discomfort and radiation and cost. … Over the last 20 years, I think the funds that have been made available to us have really helped keep us on the cutting edge of both detection and intervention biopsies of the breast.”

‘YOU ARE NOT GOING TO HOPKINS?’

During a monthly breast exam in summer 2014, Walkersville resident Lori Hesen found a lump in her right breast. She didn’t think too much about it, but she decided to go to her OB-GYN anyway who sent her for testing. While the mammogram results noted Hesen could wait six months for a follow-up, her doctor decided to send her to Bahl for further testing.

The 3D testing and software lead to two additional cancer lumps being found in early stages. After having multiple conversations, Hesen elected to have a bilateral mastectomy and followed up with reconstruction by cosmetic surgeon Dr. Scott Andochick.

Hesen’s husband, Chris, notes the Frederick Regional Health System team didn’t make the decision for Hesen but provided them with the information and resources. “We felt comfortable with our decision,” he says. “We didn’t second-guess. We felt we had all the information that we needed in order to make a very informed and critical decision.” Hesen didn’t have chemotherapy or radiation due to the early stage of her cancer. “I had so much confidence in the team,” she says. “It was just as good of an experience as it could be.”

Knowing Hurwitz socially before her diagnosis, Hesen reached out for advice and to ask some questions before her surgery. Because the fund was instrumental in providing resources for Hesen’s treatment, the couple decided to become active participants and contributors. “I just want to help breast cancer patients in any way that we can and we think the best way to help them at this point is through the Hurwitz Fund because they provide such good care to patients in the county,” Hesen says.

For the past four years, they have served on the 5K Pink Ribbon Run/Walk committee. “The fact that [the fund] is local was significantly important to us,” Chris Hesen says. “All of the different doctor visits and journeys and touch points all throughout this journey have been local. … Simply being local is a big relief. With such high-level professional talent and equipment, it is hard to beat the care that we got locally. We feel strongly about that and advise other people accordingly whenever we come across folks who have [breast cancer treatment needs].”

“It was tough just going 15 minutes to Dr. Andochick’s office,” Lori Hesen adds. “I can’t imagine going an hour every time I needed to go to the doctor. I didn’t have to do that fortunately because we have such great equipment and care and everything right here in Frederick County.”

The couple wants others to know and understand the resource residents have in Frederick with breast cancer treatment. “People automatically think when you have a diagnosis like this, ‘Oh well you need to go to Hopkins,’” she says. “I had family members that were like ‘Really? You are not going to Hopkins? You aren’t going to Baltimore? You are not going to D.C.?’ No. I am not. We have great health care right here in Frederick County and I get to take advantage of that and not have to travel.”

“The vision that Jeff and Patty had when they started the fund … is very much a godsend to the people of Frederick County,” Chris Hesen adds. “It has brought another level of focus, incredible talent and equipment and local care. It is hard to quantify the value of the fund and the benefits it has brought us.”

Starting the fund with their own money in 1999, the Hurwitzes decided to host a gala and see how much money it could raise. Auctioning fine jewelry donated from the community and pieces from vendors in New York and elsewhere, the first event was successful, raising $50,000. “We thought, ‘Oh! We can do this! We will do this every year,’” Hurwitz recalls.

After a decade of prosperous galas, they added the annual 5K Pink Ribbon Run/Walk. The fund has become known throughout the county, with many organizations, schools and towns providing donations.

“People just call me all the time and say, ‘We raised money for breast cancer and we would like to give it to your fund’ because, A, 100 percent of it stays in Frederick County for Frederick County patients and, B, 100 percent of it goes directly to patient care,” Hurwitz says. “There is no administrative cost that comes out of our fund because it is a subfund of the hospital, so all the money that we have raised has gone directly to patient care.”

Fund volunteers are ramping up their efforts to reach the $2 million goal by the end of the anniversary year. The 5K Pink Ribbon Run/Walk will take place this year on Oct. 5 at Hood College. The annual gala, set for Oct. 26, is in the planning stages but Hurwitz notes the event will be bigger this year to honor the fund’s anniversary.

Hurwitz notes it is gratifying to be part of the fund and to know that so many people are getting great care because of the donations collected. “I just have a lot of gratitude to this community because they are so giving in every way,” she says. “… I’m just really grateful that people recognize this need in our community and that they have stepped up to help to make this all possible.”