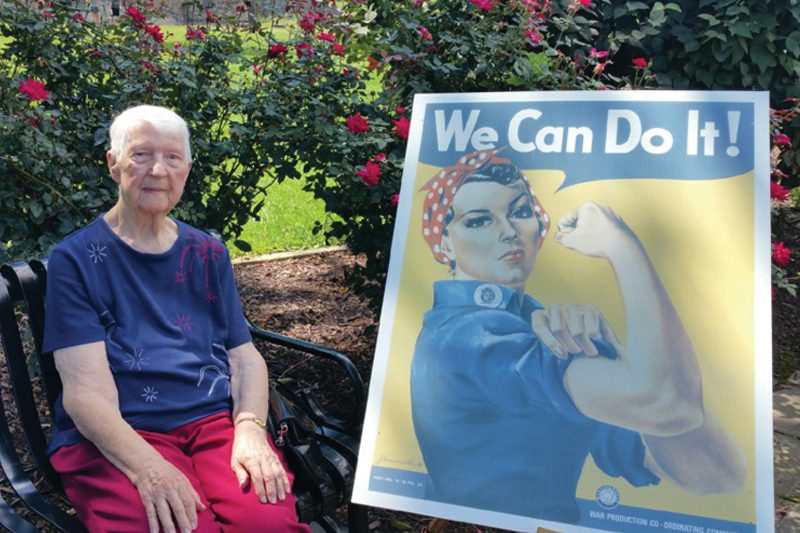 In the harrowing days of World War II when most everything seemed unsure and upside down, optimism and a can-do spirit also were evident. One of the shining examples of rolling up their sleeves and staying strong were the women, nicknamed “Rosie the Riveters,” who poured into factories, shipyards, rail yards and offices, mastering jobs vacated by the men called into battle.

“It was about everyone pulling together. We pulled together then, we can pull together now,” says Anne Montague, executive director and founder of the Rosie the Riveter Project, a national initiative based in Charleston, W. Va., with a presence in Frederick County as well as three European countries. “We’re not just talking about history,” she says, “but the future of the country, the future of women.”

Montague, whose mother was a Riveter, is on a mission to locate women who were part of the home front’s war effort so their stories can be recorded and their service recognized. “I’m really in love with these women and their commitment,” she says, adding that even “after the boys came home, these women tended to those who were disabled” both physically and mentally, as well as continuing careers and enrolling in college.

Equally important to the work of the Rosie nonprofit, Montague says, is capturing again the spirit of the country. “It’s a new type of social movement. It’s not based on protest or confrontation but pulling together and using the Rosie the Riveters as an example. … If you have a democracy, you have to include everybody. … We want to get the public behind this and be proud of this.”

Projects vary from community to community, with some common threads including a documentary of Rosies telling their stories, ringing bells on Labor Day, planting dogwood trees in public places to honor the women and working with schoolchildren on art and music projects. Also, Montague traveled with a Rosie contingent to a commemoration ceremony in the Netherlands.

Brunswick is especially active and Montague points to the city as an example for other places to emulate. A Rosie display is part of the Brunswick Heritage Museum and a bluebird trail has been established. Bluebirds were symbolic during the war years, Montague says: “They represented hope.” A popular song on the radio at that time was Bluebird of Happiness performed by Jan Pearce with a message that, “Though you’re deep in blue, you will see a ray of light creep through, and so remember this, life is no abyss, somewhere there’s a bluebird of happiness.”

Kathy Kremnitzer, past president of the Maryland Bluebird Society, is spearheading the local bluebird project with nesting boxes, poles and baffles to ward off predators. “On a windy, cold Saturday we installed 18 boxes,” she says.

Tim Wilson is another energetic part of the Rosie effort, earning the organization’s volunteer award in 2015. His first foray into the movement was in 2011. “I was watching a World War II documentary and they had a blurb about Rosie the Riveters,” he says. “Since Brunswick has a Veterans Day parade, I thought, why not honor them? I joined the Brunswick parade committee and went out looking for Rosie the Riveters. Five showed up. Each year after that we had Rosies attend.”

He says he’s on a mission to find more women from that era, “any woman who worked during the war either directly or indirectly,” he says, pointing out that many women were left to run the family farms.

Wilson is also to be commended for accompanying Ruth Staples, 94, to various events and activities. Staples grew up in Brunswick and at 18 became a Rosie when she went to work for the B&O Railroad.

‘I worked for the country’

“My sister, Edna Care, also worked on the railroad, and [so did] my dad and brother,” Staples says, which may have prompted her to leave a job as a clerk in a dry goods store and pick up a shovel. She says she was told, “‘Oh, you’ll get dirty,’ but I believe a little dirt never hurt anybody.”

Part of her three years on the job were spent clearing the tracks of mud and other debris after heavy rains and tamping down the ties. “We also cut the weeds along the track,” she says, as well as climbed to the top of coal piles with a thermometer to take the interior temperature to be on guard for spontaneous combustion. “I remember a coworker slid down this huge pile. She should have broken her leg, but she was all right.”

Staples recalls the troop trains that came through the station and the soldiers who waved from the windows. She remembered how people yelled with happiness when the war ended.

She says that during her stint doing what was considered men’s work, she never got any pushback from the men she worked with. Indeed, in 1943 Staples was featured on the cover of Baltimore & Ohio Magazine with the headline, “You did alright, Lady.”

“I never had much, but I had a loving family,” Staples says. “Money never bothered me. I worked for the country.”

On a snowy March morning Montague and an assistant travel to Frederick to meet in the office of Jodie Bollinger, Business Development Specialist for the Frederick County Office of Economic Development. Bollinger says she’s interested in the group’s work “because this is part of our history” and “manufacturing is a big part of Frederick.” Additionally, the idea of community cooperation, of pulling together, is appealing.

Montague says, “We get by on small donations and grants, but we need to find sponsors,” which is on the group’s list of goals.

She’s happy with some of the steps the federal government has taken, including approving a Rosie the Riveter Day in 2017 and 2018 (although she would like that designation in perpetuity) and the establishment of a Rosie the Riveter National Park near San Francisco Bay.

Apart from tangible monuments, she also seeks a mindset of encouraging people to train for needed jobs such as those involving science, technology, engineering and math (STEM), creating community improvement projects, encouraging tourism to various Rosie sites, and above all, trumpeting the belief that, “We pull better when we pull together.”

Anne Montague can be reached at [email protected]