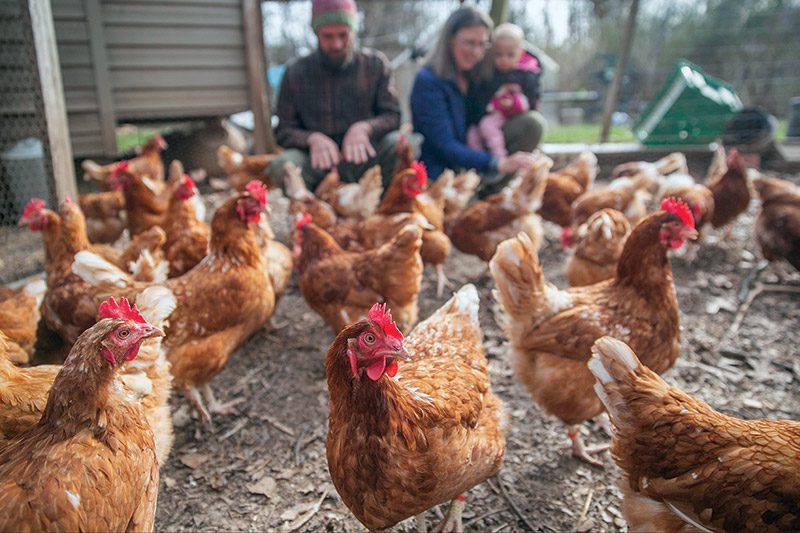 It’s hard to look at 250 peeping balls of fluff and feathers and think about business, but that’s what Travis Kreitzer sees when he looks at his 10-day old chickens at Good Hope Farmstead in Woodsboro. Kreitzer raises chickens on pasture to sell as meat at farmers markets and through home delivery.

It’s also hard to break eggs from birds named Julia, Pearl and Isabelle, but that’s what I did recently when eating eggs from Deer Run Farm in Emmitsburg, another pasture-based chicken farm. Allison Rostad tends to the farm’s hens and chicks.

Kreitzer (meat) and Rostad (eggs) come from two different corners of the chicken business, but both say raising their birds on pastures makes a difference in the health of the birds and the soil and in the flavor and nutrition of their products.

Rostad is the chicken expert at Deer Run Farm. The farm is owned by the parents of her boyfriend, Josh Stewart. The Stewarts raise Red Angus, but when Allison decided to buy a chicken farming venture, they were all in. Now, in pastures where the two species intersect, hens and cattle get along just fine.

Rostad, 28, worked in graphic design until two years ago. That was when the owners of Whitmore Farm, a neighbor of Deer Run Farm, decided to retire. Will Morrow and Kent Ozkum spent 14 years raising heritage chickens on pasture and selling eggs. They sold their business, including hens and incubators, to Rostad and Stewart. Rostad left her office job and began learning about hens. Stewart kept his job in project management.

“I had to learn everything fast,” she says. “Because I bought the business, people assumed I knew what I was talking about.” She did thorough research, talked to Morrow and Ozkum and other farmers, and got to work.

She was determined to make the business stand out, and she believes it does. “We are the cleanest hatchery in the United States,” she says. She regularly tests the birds for diseases. Farm visitors are cautioned not to walk on pastures, to prevent contamination.

“Even the feed trucks are a risk, because when they go to other farms, they can pick up bacteria,” she says. “Bacteria can live in the nose for 72 hours. We vaccinate every three months.”

A walk around Deer Run Farm gives a glimpse of chickens at every stage of life. From incubators with hatchlings to chickens poking their beaks through dirt, searching for worms, it’s an education in hen farming. Along with eggs, Rostad raises chicks bound for other farms and backyards. Male chicks and hens past their prime are sold to slaughter.

She raises Delaware, Copper Maran, Welsummer and Ameraucana birds. These are all heritage breeds, as opposed to hybrids, which are developed to grow faster. The Delaware breed is closest to the chicken meat typically sold in grocery stores, but it’s still a heritage breed. Heritage breeds typically need 14 weeks for the birds to go from hatchling to market size, unlike six weeks for most retail chicken.

To raise and hatch fertilized eggs, six incubators fill a small building on the farm. The birds are sold as day-old chicks. “We sell locally for on-farm pickup or ship across the U.S.,” Rostad says.

It takes about 14 hours of daylight for each hen to produce an egg. In summer, each hen lays one egg per day. In winter, hens lay one egg about every three days. “A lot of people use artificial lighting in the coop,” Rostad says. “We do not. We want our birds to have a break. It helps them to have a longer laying career.”

The eggs aren’t organic, but customers know the chickens roam freely on pasture, all day every day. Eggs labeled organic or pasture-raised often are confined inside a barn or coop all day. “It’s important to know your farmer,” Rostad says.

Hens can lay eggs for many years. “We keep our birds until they’re 2,” Rostad says. “For commercial operations, it’s not advisable to have birds older than 2. But for backyard purposes, they can lay until they’re 10 or more.”

Rostad sells older hens, known as spent hens, along with male chickens, to backyard owners or to ethnic communities who prefer to slaughter their own birds.

The hens spend most of their time at Deer Run on pasture. It’s that meadow time that makes the eggs at Deer Run stand out, Rostad says. During the day, hens skitter about in fenced-in land, separated by breed, while eating worms, bugs and vegetation. She supplements their natural diet with a chicken feed of non-genetically modified corn and grains, along with vitamins and minerals essential to chickens.

At night, they head inside to mobile coops. Hens like to huddle together at night, and the coop provides them a dark, safe place to do just that. Rostad locks the coops each night to keep hens from wandering into predators, and unlocks them each morning.

The 8-by-10-foot plywood-and-metal coops, each of which house 150 birds, are perched on wheels from old hay wagons. This allows them to be moved each day, which helps spread the manure. This symbiotic process helps the pastures regenerate, Rostad says.

“If the chickens drop excess feed, the cows clean it up,” she says. “Manure from the chickens drops on the ground and puts nitrogen into the soil, which allows the grass to grow thicker and greener.” That thick, healthy grass makes good pasture for the grass-fed cows. “It’s called rotational grazing.”

Rostad sells large eggs for $7 a dozen. Customers are willing to pay for Deer Run’s quality. They come from as far as North Carolina and New York. “They love our eggs,” she says. She sells eggs at several farmers markets, including the Key City Food & Market in Baker Park and the Thurmont Main Street Farmers Market. She also sells eggs at the farm to customers who call in advance.

The work days are long, and the business needs constant attention, but the operation is succeeding.

Travis Kreitzer’s Cornish cross chickens at his family’s Good Hope Farmstead have a life very much like those at Deer Run Farm, except it is a bit shorter. Kreitzer’s parents bought the 50-acre farm in 2011. They had dreamed of owning a farm for years and had the chance in retirement. Five years ago, Travis decided to leave his career in wholesale plumbing supply and join them.

Farming isn’t easy, but Kreitzer thought there might be a market in selling pasture-raised chickens for meat. Each spring, Kreitzer gets his first shipment of 250 chickens in for the season, and this year’s arrived in March. The birds, a few days old, need to stay very warm for the first two weeks. Starting at about 3 weeks old, he moves them outside on days when the temperatures rise above 50 degrees. “When they’re 4 weeks old, they can survive freezing weather,” he says.

The birds graze freely outdoors on pastures shared with cows. They also eat a feed made of organic, non-GMO ingredients. “We don’t use a starter feed,” Kreitzer says. Many commercial chicken flocks are raised on starter feed for the first three weeks, to encourage growth. By not using the starter feed, Kreitzer says his birds have some advantages.

“There’s a reduced mortality rate, and it allows them to put on normal weight,” he says. “Commercial flocks have a lot of leg problems. Their growth exceeds what the musculoskeletal system can support.” The only mortal danger for his birds are owls. To protect the flock, Kreitzer locks them into mobile A-frame coops at night.

That rest allows them to develop normal circadian rhythms. “Birds will stay active for 24 hours if they have light,” he says. They will eat for much of that time, which causes them to grow larger, often too large for their legs to properly support them.

Kreitzer considered raising heritage birds, but his customers prefer the taste of Cornish cross birds. They’re not organic, but he raises them the way nature meant for chickens to be raised. Cornish cross are the same chickens raised for most commercial sales. They have more breast meat, but because these birds are raised on pasture, the flavor is different from commercially raised birds.

“They forage, and they don’t develop as much fat,” Kreitzer says. Commercially raised chickens do have more fat, but it tends to be greasy and rubbery.

Kreitzer buys his grain from Ernst Grain & Livestock in Clear Spring. “It’s a non-GMO broiler feed,” he says. “They use farmers that share our philosophy: no-till farming to reduce erosion.” The feed consists of soybeans, corn, barley and wheat. “Chickens are not cattle. They need this feed to help them stay healthier and be more flavorful.”

While outside, the chickens scavenge for bugs, worms, blades of grass, and they dig through cow manure. When the chickens are ready for market at 6½ to 7 weeks old, Kreitzer loads them onto a trailer early in the morning, while they’re still sleepy. He takes them to Locust Point in Baltimore where they are slaughtered. Their meat is vacuum-sealed and frozen.

Kreitzer, 33, sells the chicken meat at farmers markets in Frederick, Rockville and Bowie, and makes deliveries to customers who leave coolers on their front porches. “We have to stay relevant, and go to the customer,” he says.

To keep the farm going, his parents and his sister raise beef cattle, sheep and lamb, and geese and ducks for eggs. The family uses farming methods that benefit the soil and nearby streams and prevent erosion. Kreitzer also belongs to local and state farm organizations, where he learns the latest in farming, marketing and conservation methods.

“The more we can work together to pull people out of supermarkets, the better for all of us,” he says. “Knowing your farmer is the only way you’re going to know your food, especially when it comes to meat.”

Every spring, Ben and Heather Sayler buy 175 pullets, or young hens, at 16 weeks old, as part of their farm business, Pleasant Hill Produce. Buying the Red sex-link hens at that age means less work raising them. “It’s one less thing to worry about,” he says. Each hen lays about 275 to 300 eggs a year. After two years, the hens become chicken broth or stew for the couple and their two children.

The couple raises vegetables—not organic but grown without synthetic pesticides—on a couple of acres of rented land in Walkersville. The hens live freely in forested yards at their home in Mount Pleasant. At night, the hens go into coops. The couple

sells their eggs and 80 varieties of vegetables at local farmers markets and through community supported agriculture.

Ben Sayler, 34, studied biology in college, and has an MBA, but he always enjoyed gardening. The couple has farmed for six years. “This is what supports our family,” he says. “I just jumped right into it. We saw more people interested in local food and healthy eating, and we thought the best way to contribute to that movement was to grow vegetables and eggs.”

His business training helped the couple to organize the business into efficient systems. “We never take on any debt for equipment,” he says. “Anything I purchase has to pay for itself.”