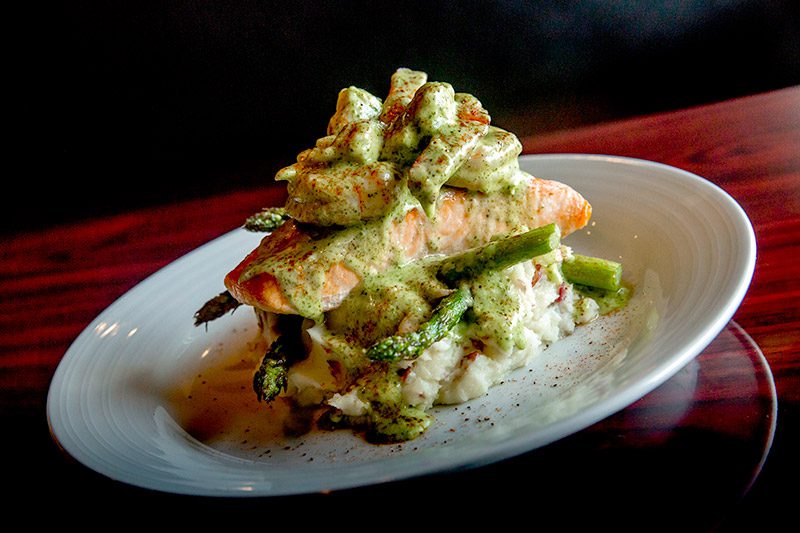 Around these parts it’s a loaded question to ask, “Who makes the best crab cake?” Now, the Sakellis family is adding even more fuel to the fiery debate among local diners. They opened Fratelli’s Italian & Seafood in Hampstead in 2012, a twinning of the original Fratelli’s Italian Restaurant in Salisbury.

Owned by husband-and-wife team Nick and Roula Sakellis, along with second-generation restaurateur, George, Fratelli’s newest location features prominently at the Cross Stone Commons plaza at the intersection of Main Street and Middletown Parkway, a stone’s throw from Richland Golf Club. Fratelli’s spreads over 5,000 square feet with approximately 160 seats in an atmosphere that general manager Hathan Clark describes as “relaxed casual,” complete with romantically dimmed mood lighting. The loca-tion is modeled after the successful Hampstead site, with a similar

Clark spent three years at the Hampstead locale before coming to Middletown. He says, “If you walk in the kitchen here, it’s like déjà vu.” The menu is the same, too, save the nightly specials exclusive to each location. That means fans in western Frederick County don’t have to drive far for Fratelli’s best-selling favorites: chicken Chesapeake, hand-cut steaks, shrimp scampi, meat-lovers’ penne, fettuccine Gypsy or chicken Parmesan. Of course, alone or in combination, Fratelli’s boldly spiced crab cakes continue to stand out among guest reviews.

Clark’s favorite menu item is the stuffed portobello mushroom, “because you get to try the pasta, the crab cake, the seafood and the sauce.” His eyes dance with delight at the thought of the combinations. That dish features house-made linguine topped with a sizeable portobello cap stuffed with an entire crab cake. It also includes jumbo shrimp and a light lemon-butter sauce. The chicken Chesapeake is a boneless chicken breast topped with a jumbo lump crab cake, too. Clark grins, “There are lots of ways to enjoy crab here. We are definitely very seafood-focused.” There is even a pan-cooked Alfredo pizza with crab, shrimp and scallops.

In addition to incorporating sweet morsels of crab, Fratelli’s recipes call for the freshest seafood it can source. A recent round of specials featured rockfish, swordfish, and mahi-mahi. In season, the restaurant will offer soft shell crabs, while popular oysters Rockefeller appear regularly. The

clams casino appetizer is a brothy, intensely flavorful mix of chopped clams, sautéed vegetables, Italian breadcrumbs and bacon, loaded back into their shells and served with fresh lemon on a bed of greens. The “salmon on mash” is another favorite. It’s an eye appealing stack of pan-seared salmon, grilled shrimp, lump crab and guest’s choice of red pesto or basil pesto over garlicy mashed potatoes and grilled asparagus spears.

The house-made pasta is another hallmark of Fratelli’s carefully crafted cuisine. Their gleaming Rosito Bisani pasta maker sits in a corner of the dining room, ready to turn out spaghetti, linguine, capellini, penne and more, made from finely ground semolina flour. It’s one of the reasons fans keep coming back for the fettuccine Gypsy. The dish is loaded with sautéed spinach, colorful cherry tomatoes, mushrooms, artichoke hearts and olives in a light garlic white wine sauce, tossed with a substantial serving of tender noodles.

“All the pasta on our menu is made from scratch in-house,” says Clark, insisting, “Very few restaurants do entirely fresh pasta. You can definitely taste the difference.”

Clark notes that the majority of other menu items are also made from scratch, using Sakellis family recipes, including sauces, soups and desserts. He calls out the slow-simmered mari-nara, cheesy Alfredo and Maryland crab soup, then adds French onion, tomato bisque and sausage penne soups to the list. Homemade cream of crab makes an appearance on weekends. A cup of soup and fries are included at lunch with paninis, sandwiches and wraps.

Fans give Fratelli’s high marks for generous portions, too. Meals are served with bread and family-style bowls of garden salad, so it’s rare to go home hungry. If diners save room, an illuminated display case in the dining room shows off daily dessert options. There is always creamy espresso-laced tiramisu and light-textured New York-style cheesecake, which may be topped with a gloss of fresh berries or augmented by seasonal flavors such as pumpkin, Key lime or lemon.

There is a full bar with an extensive wine list. Choose from traditional Lambrusco or Chianti, hoppy craft beer or signature craft cocktails, such as the Tito’s vodka martini, which is a five-dollar special on Tuesday nights. Each day features a different cocktail along with fruity sangrias. Sipping

this wine punch adds to an air of celebration. It comes spiked with white peach, strawberry, black raspberry, pomegranate or mojito flavor. A four-glass tasting flight is a sharing portion that’s great when you want to try more than one variety.

Clark recognizes that people come to restaurants for food they normally wouldn’t make at home. It should be a little indulgent, paired with ser-vice that makes guests feel special. He is earnest in his appraisal, “We want all the dishes to have a little bit of a unique twist. And we definitely believe in giving people their money’s worth.” Judging from the full tables around him, new fans seem to agree that Fratelli’s delivers on the pledge.