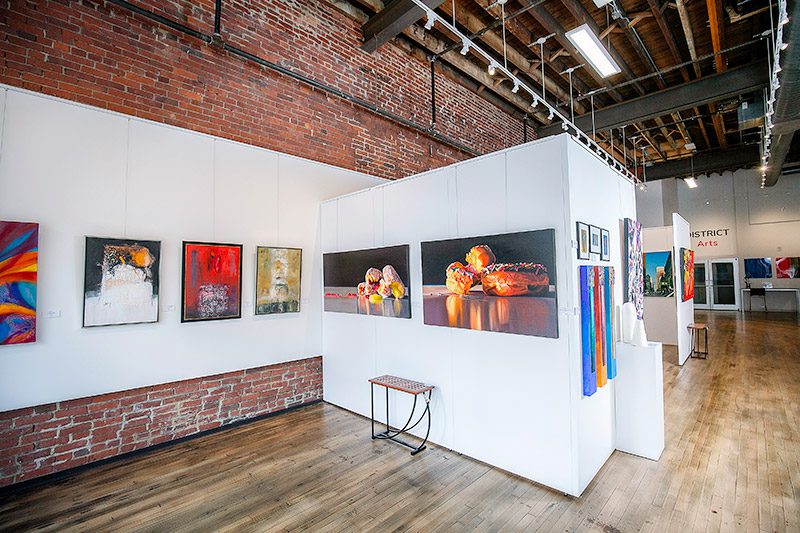 “Do it while you can because you never know what the future holds.” From sailing up and down the East Coast to opening an art gallery in the heart of Downtown’s historic district, it is that credo that has steered the ship for Bill and Staci McLauchlan over the past 15 years.

Shortly after 9/11, the McLauchlans realized that life was too short to not do the things you want. They immediately sold their house, bought a boat and set sail on a voyage that continued on for 12 years. “At the time, it just seemed like you never know what is going to happen in life, so we said, ‘Let’s just go ahead and do it,’” Bill remembers.

Between sailing the Bahamas, exploring the Maritimes in Canada and cruising up the Hudson River, Bill, 69, and Staci, 61, say there is not a single day they regret spending those years on the water.

Staci is an artist who has been creating quilts out of batik fabrics for years. “It got to the point where everyone in our family said, ‘We don’t need any more quilts,’” says Bill with a small chuckle. Adds Staci, “So now I donate them all to charity.”

The McLauchlans had begun participating in art shows while living on the boat, but it wasn’t until Bill decided to photograph one of her quilts and manipulate it on the computer to create a digital transformation that they realized they were on to something. “He would play with the image and often times it bore no resemblance to what I had done, but it was always really cool,” says Staci.

Thus, their love of collaborating through art was born. They began printing their artwork on aluminum to create 2D wall art and selling the pieces at the art shows a couple times a month.

For those who know the McLauchlans, this collaboration doesn’t come as a shock. The couple has been married for 33 years and has always done everything together. “We worked together at the marketing research business we opened in Cincinnati, we lived on the boat together and we make art together,” says Staci.

While the memories made are priceless, after more than a decade of cruising and art shows, the time came to move on to their next adventure – this time on land. “I wouldn’t regret one second of being on the boat, but it got to a point where it was time to get off,” says Staci.

And when that time came, they knew exactly where they wanted to tie up.

“We traveled up and down the East Coast for years and years and we always said, ‘I wonder where we’re going to live?’ And you’d think that would be an easy decision, but it wasn’t until we came to Frederick. It just kind of spoke to us and said, ‘You belong here,’” explains Staci.

The McLauchlans had participated in the Frederick Festival of the Arts for years and it was there that they really fell in love with Carroll Creek and the vibrant heartbeat of Downtown. “Over the course of our lives, we’ve lived in a lot of different places, both on the boat and when we had our previous business, but this is the only place I’ve ever lived where at the end of the day, people come streaming into town instead of fleeing to the suburbs,” adds Bill.

After settling in Frederick in 2016, it came time to figure out their next joint venture. “We were getting pretty burnt out with doing shows, so we said, ‘Let’s see about opening an art gallery,’” says Staci.

And so, they did.

District Arts opened at 15 N. Market St. back in March and has seen a promising response from the community so far. “I think one of the things we are most excited about is just how cool our space is,” says Staci. “We looked and looked for so long and when we saw this space, we just thought it was incredible.”

Bill says both he and Staci are motivated by bright, vibrant color. This is reflected on the walls instantly as you step inside the gallery, which expertly blends old with new by featuring colorful contemporary pieces inside the historic space.

“We wanted to concentrate on contemporary art, not only because that is what we really love and that’s what our art is, but we felt like maybe that was a niche that was missing in Frederick,” says Staci. “There are a lot of really nice art galleries here with traditional art so we tried to think of something that would be a little bit different.”

The work of 35 artists currently on display is split among three groups—local artists, regional artists and national artists. The pieces range from paintings to ceramic work to printmaking and more. Each artist signs a six-month contract and provides four or five pieces to the gallery. As the pieces sell, they are replaced with the next one.

“Our first thought was to include all of the amazing artists that we’d met throughout the country doing art shows, but then we realized we wanted to include a lot of the local artists as much as possible, too,” says Staci.

Future plans for District Arts include adding some extra panels inside the gallery to house a monthly featured artist and themed exhibitions. “The panels will make it so we never have to take down one artist’s work to accommodate another,” says Staci, who adds that there is really not a bad spot in the gallery.

“We just hope to continue supporting local artists,” adds Staci. “We’re hoping to not only become a presence in Frederick, but to hopefully be kind of a destination gallery for people in D.C. and Baltimore that are coming into Frederick to eat at VOLT or The Wine Kitchen or The Tasting Room. That’s our goal. We’re just very proud to have these artists here and to share this with the community.”

District Arts is open Wednesday through Sunday. For more information on the gallery, visit www.districtarts.com.