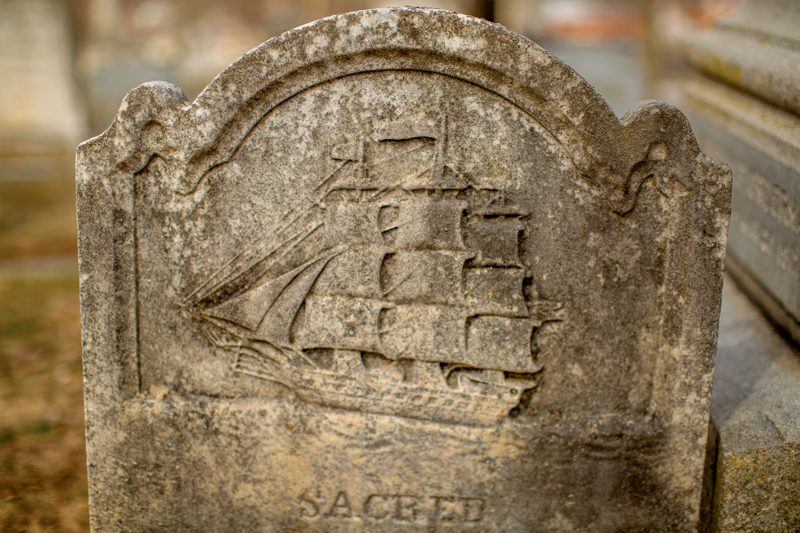 Mount Olivet Cemetery is a serene place to take a walk, surrounded by bustling city life. It’s an oasis of green space, parallel to busy roadways. And it’s a burial ground, with a history stretching back nearly 170 years.

Mount Olivet serves as a final resting place to the ordinary and the extraordinary. To Frederick’s finest and to ne’er-do-wells. It’s there, says Chris Haugh, that many stories of Frederick are preserved. The Mount Olivet Cemetery Preservation and Enhancement Fund is a new nonprofit effort to help the cemetery keep on telling Frederick’s stories for centuries to come.

Haugh, Mount Olivet’s community relations and historic preservation manager, says the fund is modeled after Mount Auburn Cemetery in Boston. That historic cemetery also has a nonprofit arm with an active advocacy “friends” group, which sponsors not only the preservation of deteriorating gravestones, but also bird walks, book discussions, meditations, wildflower walks and countless other cultural, historical and natural resource events.

The vision for the Mount Olivet Friends Group will start small. Mount Olivet board members Bert Anderson and MaryAnn Frank hope to attract volunteer members who want to help with event planning, genealogy research and cemetery preservation projects. The group would also help with fundraising activities for the cemetery preservation fund. “Mount Olivet is a museum without walls,” says Anderson, who has spent many years preserving historical structures in Frederick.

Frank discovered through Mount Olivet records that her family lineage traces back to John Fessler, Frederick’s famed clockmaker, who died in 1820. She wants Mount Olivet to have updated microfilm and other technology to help other people researching family heritage.

The cemetery expects to remain in the burial business for at least 100 more years, but the nonprofit arm will manage preservation efforts. “The purpose of the fund is to ensure the cemetery will be maintained for its historic, architectural and social value to Frederick,” Anderson says. “Although it is a place where families commune with their dead loved ones, it is also alive and functioning, and we want it to remain that way for generations to come.”

That fund, established through the Frederick Community Foundation, started with $25,000 of seed money raised by Mount Olivet board members. The late Colleen Remsberg, who died in 2018, was a driving force in setting up the fund. A former president of Mount Olivet’s board of directors, Remsberg was passionate about preserving the cemetery and other local historical treasures.

There are shiny new gravestones. There is a wildflower garden. There is a historic chapel, complete with Tiffany stained glass, which hosts weddings as well as remembrance services. At Mount Olivet’s entrance stands the monument to The Star-Spangled Banner author Francis Scott Key, who is buried there. Other monuments honor Barbara Fritchie, the Frederick woman immortalized in literature for defiantly flying an American flag as Confederate soldiers marched by, and Thomas Johnson, Maryland’s first governor.

But there are also deteriorating stones. Families move away and heirs die; eventually, there is no one left to maintain the stones of granite, marble, limestone and fieldstone, and they crumble, sometimes with outside influence. “For many years, nearby quarries caused the ground to shake,” Haugh says during a cemetery tour.

In the 19th and early 20th centuries, the stones were often placed without a foundation. Others were held up with iron rods. “Those can rust,” Haugh says, pointing out stones leaning up against the rods that formerly held them in place. “Over time, the ground shifts, and without the iron rods, the freeze-thaw cycle causes the monument to fall.”

There are crumbling obelisks, angels with wings snapped off, fallen crosses and numerous signs of decay among monuments large and small. Anderson emphasized that the cemetery is well-maintained overall, but maintaining all of the older monuments is a challenge.

Mount Olivet is the final resting place for the remains of 40,000 people, about three quarters of Frederick’s population today. Many of those are important to Frederick’s history, and many are the ancestors of people living far from Frederick who journey to Mount Olivet in search of family roots.

Haugh tells the stories of some of those buried here. He tells them in several ways. Through his “Stories in Stone” blog on the cemetery’s website; through the “Candlelight in History” tours each fall and “Frederick’s Other City” tours each spring; and through the many group tours he conducts for visitors of all ages. A tour through the cemetery with Haugh is an education in Frederick of the past.

Hester Houston was one of the first African Americans buried in the once-segregated cemetery. She was buried in the plot of the family who employed her. McClintock Young, known today as the namesake of McClintock Distilling, is buried here. Young was an early entrepreneur who hoped to make Frederick a center of commerce and culture. He started the Ox Fibre Brush Company, but that wasn’t all. He patented over 30 inventions.

There are three small 19th-century stones each bearing the name of Fitzhugh, the family that once owned the famed Catoctin Furnace. One is Isabella Fitzhugh, for whom the “Isabella” furnace was named. Isabella moved to California long before she died, but she was buried in Frederick. “Home is where the burial plot is,” Haugh says.

There are members of the Feuerstone family, some of whom moved to Akron, Ohio, where descendants founded the Firestone Tire Company. There is Hiram Winchester Jr., who died in Tombstone, Ariz., days before the famed shoot-out at the O.K. Corral. James Clarke, for whom Clarke Place was named, operated a canal boat on the C&O Canal in his younger days. Later he became president of the canal’s main rival, the B&O Railroad, and then other railroads. In his later years, he returned home to Frederick.

There is Jacob Markell, memorialized in a local student art contest. There is Jacob Engelbrecht, locally famous for his 19th-century comprehensive diaries, who was sometimes referred to as a collector of gossip.

There’s the story about Robert Downing. Downing was one of America’s most popular actors in the 19th century. He traveled the country acting on the stage. Newspapers chronicled his life in great detail, including bits of salacious gossip. Eventually, however, he retired from the stage and married a woman from Middletown. He settled on a farm there and is now buried in Mount Olivet.

“If there’s any written records left of these people, we’d like to put it in our files, so we can serve as a repository for people,” Haugh says.

One of the stones repaired marked the grave of Rose Knott. Her rose-colored stone had dulled and darkened with age. Participants were able to return the stone to its previous hue and luster.

They also restored a terra cotta image of a sleeping child. Many more still need restoring, however. An intricately carved sailing ship on John Ordeman’s grave is dull and dark with age.

“One of the first things we’ll do is take an inventory, sort of a most-endangered list, of some of our fascinating and unique monuments,” Haugh says.

Some of the oldest monuments include those of veterans of the War of 1812, graves of those buried in Downtown Frederick churchyards and later moved to Mount Olivet when it opened in 1852, and graves of Confederate soldiers who had no place to be buried after the Battle of Antietam. The cemetery’s original public bathroom, an outhouse, still stands as a testament to the visitors who once came in remembrance of family and friends.

Haugh, Anderson and Frank hope the project will help Mount Olivet raise its profile as a gathering place for those who love history, nature, recreation and stories about people. And they expect the preservation project will help more descendants find the graves of their ancestors, and see those names etched in stone.

“Somebody will be doing this after I’m gone,” Haugh says.