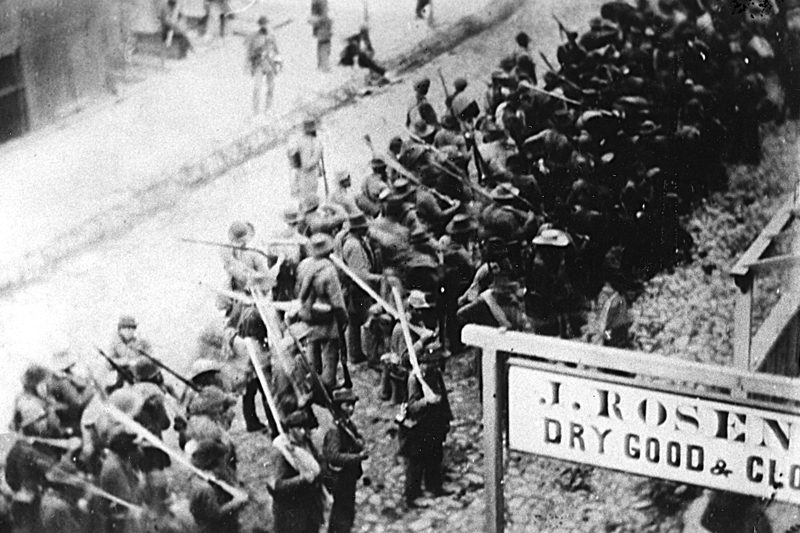 The slightly blurred, black-and-white image is one of the iconic photographs from Civil War-era Frederick. Confederate soldiers are marching down a Frederick thoroughfare, believed to be Patrick Street, as the rebels march toward a fateful meeting with Union soldiers at Antietam Creek near the town of Sharpsburg.

Two history buffs, however, are turning the tables on the accepted story behind the photo.

Erik Davis, of Frederick, and Paul Bolcik, of Rockville, aren’t historians. But they are tenacious researchers, and after two years of careful investigation, their findings have punched holes in the accepted story surrounding the photo. The two have unearthed a trove of information about the photo and they are now certain it was taken on Market Street. They are also fairly certain the soldiers were marching south to what would be known as the Battle of Monocacy in July 1864, not west toward Sharpsburg in September 1862.

The photo matters not only to those interested in Frederick history, but also to Civil War buffs and people who study the history of photography. That’s because it’s the only known photo of Confederate soldiers marching in Union territory, Davis says.

The photo, first published in Civil War Times Illustrated in April 1965, shows Confederate soldiers marching past a sign that read, “J. Rosens[tock] Dry Good & Cloth[ing Store].” It’s that sign that led generations of historians to conclude that the photo was taken on Patrick Street. But the photo gave Davis, a geographer by profession, and Bolcik, a landscaper, valuable clues that led them to determine it was actually taken from the third floor of a building where Hunting Creek Outfitters now sits at 29 N. Market St.

“I like history and mysteries about history,” Davis says during a tour of Downtown buildings. His work creating maps for car navigation systems gives him access to many street photos. In 2015 he got the idea to re-create the historic photo from the same vantage point, showing the area as it is today. “It would be a then-and-now,” he says. “I seriously thought it was here on Patrick [Street].” A historical marker, still on East Patrick Street, backs up the common story.

Davis and Bolcik, friends and members of the Center for Civil War Photography, got to work on their project. Their first task was to match up Patrick Street buildings with the images in the photo. But there was no match, so they decided to do a little digging. “Once I started researching, I realized that wasn’t the place,” Davis says.

Davis and Bolcik went to the Maryland Room at the C. Burr Artz Library, where manager Mary Mannix supplied them with old news clippings from the era. “We stumbled upon a newspaper article that showed J. Rosenstock Dry Goods opening on Market Street,” Davis says. “We knew if we could find this guy’s business, we could find the location.” Property records showed the Rosenstock building on Patrick Street, which served as the home to Rosenstock’s department store for much of the 20th century, didn’t open on East Patrick Street until 1868. Newspaper ads showed Rosenstock opened his first store in April 1860 at what today is 25 N. Market St. Today, that building houses The Perfect Truffle.

ORIGIN OF A LEGEND

Most historical accounts say that Frederick photographer Jacob Byerly took the photo, and on that point Davis and Bolcik agree. Byerly’s studio at the time was on North Market Street, next to the original Rosenstock’s store. It’s out of this studio where the photo was taken, with caution.

During his tour, Davis notes the many architectural features in the photo that match the North Market Street location, including hatchway cellar doors, a dip in the sidewalk and the family home of George Murdock Tyler, identified by fuzzy awning poles.

In the photo’s upper left, across from the marchers, is a darkened building. Later demolished, it’s where Cacique Restaurant is today. To the left, just out of camera range, was the Fredericktown Savings Institution, now home to the Frederick County Treasury Department. The bank told another part of the story.

“This was the bank that had just coughed up [$64,000] for the ransom,” Davis says. In 1864, Confederate Gen. Jubal Early, who had pillaged Hagerstown and Middletown, demanded that Fred-erick pay him $200,000 to prevent his troops from burning and looting Frederick. Local businesses and residents agreed because they feared the Confederates would follow through on their threat. Several banks joined together to pay the ransom.

Whether the photo was taken in 1862 or 1864 is less certain, however. Still, there are some clues in the photo itself, Bolcik says. There are several wet patches in the photo, indicating possible rain. Weather records show it didn’t rain during the Confederate visit in 1862, but it did rain overnight July 8-9, 1864. Another clue is that many of the soldiers appear bedraggled, as though they had been fighting for years, Davis says.

“The situation on July 9 [1864] was different,” Bolcik says. Frederick banks were trying to come up with the ransom, but outside, downtown was almost deserted, except for the soldiers.

“It was a crisis situation in Frederick,” he says. Byerly was probably holed up in his third-floor studio at the time, hoping to save it from the invaders. Nineteenth-century photographers typically located in the top floor of a build-ing, carving out skylights needed to provide natural light for photos.

Curiously, it was the economic depression created by the ransom payment that drove Rosenstock to close his North Market Street store in 1865.

There are no known original prints of the Confederate march photo. The now-famous photo is a copy of a photo from Albert Brown, who inherited three prints from his father, Benjamin Brown, a suspected Con-federate spy. Albert made the photos available to Ben Rosenstock, who had them copied by the Edmonston Studio, which operated in Frederick from 1925 to 1934. The original photos seem to have disappeared, although Bolcik and Davis hope one is eventually unearthed.

The photo likely didn’t measure up to Byerly’s standards, Bolcik says. Byerly used a portrait, not a landscape, lens, probably because he didn’t have much time to set up his equipment after seeing the soldiers. There’s a thumbprint in one corner of the glass. “This photo’s out of focus,” he adds. “And he probably thought no one would want to buy a photo of the bank robbers.”

Frederick tourism officials are looking into changing the sign to reflect the new research. The revelations about the photos are not surprising, according to Mannix of the Maryland Room. “History’s always open to interpretation,” she says. The pair did an enormous amount of old-school research, using newspapers and property records, she adds. “Erik and Paul read this stuff, and this is the result.”