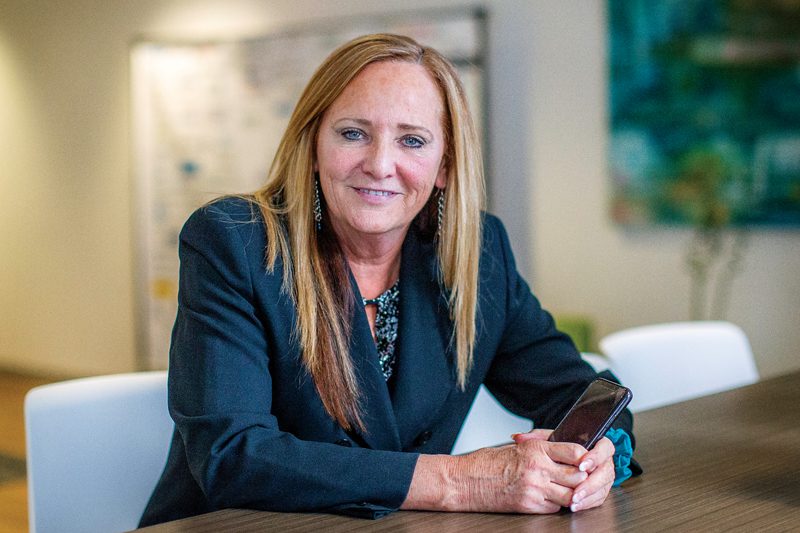 The hefty cost of starting a business can topple a venture before it even gets off the ground. For scientists and other entrepreneurs who open up shop, the challenge of meeting payroll, leasing an office space, securing equipment and investing in marketing can severely hinder their ability to perfect a business model, test the feasibility of their product and develop and manufacture it.

It’s an undertaking that Kathie Callahan Brady sets out to make less intimidating and overwhelming for entrepreneurs as president and CEO of the Frederick Innovative Technology Center, Inc. (FITCI), an innovative incubator that gives its information technology, biotechnology and renewable-energy clients the tools and support they need to succeed. “We set out to create a center where we all want to run our next business,” Brady says recently from an office inside of FITCI’s Downtown Frederick location, inside of the ROOT building on Market Street it shares with other business-focused organizations like Frederick County Chamber of Commerce and the Frederick County Office of Economic Development. A second FITCI location with lab space is located south of the city on Metropolitan Court.

On May 15, FITCI will celebrate its 15th anniversary and is leaps and bounds ahead of where it was when it first started in 2004 on the top floor of the Rosenstock Hall building at Hood College. The public- private partnership has even made strong progress since Brady started three years ago, when, as she recalls, it took an exorbitant amount of time for businesses to reach the finish line. Brady, a successful entrepreneur who created several lucrative businesses herself, says she encountered start-ups unsure about their business model, if they even had one, or heading down a completely wrong path with a model that wasn’t financially viable.

“The majority of them pivot or shut down,” Brady says. “Part of it is they put their idea together by themselves,” but when they come to FITCI, established leaders review their idea and provide valuable feedback. “We’re stronger if we’re surrounded by really smart people,” Brady adds.

She has implemented several initiatives to help FITCI clients get the ball rolling—from creating close mentorships in which established CEOs offer tips to FITCI companies on financial resources to a requirement for clients to attend classes at FITCI’s “Start Up U” to learn important information for new businesses. FITCI also implemented private preview parties where clients can look for ideal partners and investors.

FITCI, an incubator and an accelerator, has become like a family to its small business clients. The organization promotes innovation while also significantly speeding up the pace for which commercially viable technologies are developed. This was all designed to give entrepreneurs a leg up, Brady says.

When she first started, Brady says she thought: “I’m going to give them something that they don’t have. I’m going to surround them with other [entrepreneurs] who have done it; a person who’s in the trenches. It’s the ‘secret sauce’ for FITCI. I found five guys who got it, who understood and would help me.”

The change has been tremendous. “We help them get this phenomenal three-minute pitch together,” Brady explains. “We teach them to only take business advice from well-established CEOs who are running very successful companies. To only take money advice from people who have raised money or who are writing checks.”

Brady says FITCI is now on a sharp growth trajectory. “We had 15 clients when I first started; it’s 44 now,” she says. “We increased revenue by 98 percent.”

Frederick County Executive Jan Gardner, who was a member of the original board that helped launch FITCI in 2004, can attest to the growth. Gardner says the organization has made a significant impact on Frederick County: Most of the FITCI companies locate in the county upon graduating from the program and the companies that have come out of FITCI have created a total of 800 new full-time jobs. “We really created a cluster of these businesses. It’s really creating a great economy,” Gardner says. “I know people say these jobs are highly specialized and technical, but they also hire for administrative, manufacturing, distribution jobs. These are good-paying jobs.”

FITCI is one of about 1,400 business incubators across the United States. Gardner says there are about 20 in Maryland. Business incubators are designed to teach business owners the skills to create successful startups with a solid foundation. For its biotechnology, IT and renewable-energy entrepreneurs, FITCI provides shared office and lab space, business services and priceless connections with leaders in their industries.

In September 2013, RoosterBio moved into an empty lab in FITCI with its two co-founders and expanded staff to include three unpaid volunteers by the end of that year. The company grew from six to eight employees from 2014 to 2015. Today, the company has 45 employees and has several open positions at its new Westview Drive headquarters. The company projects to double its employees over the next 18 to 24 months. “Our aim is to have the same impact on the regenerative medicine industry that Intel had on the computer industry,” RoosterBio Founder and Chief Product Officer Jon Rowley says.

A lot of the company’s early success can be directly attributed to FITCI, Rowley says. “We could not have gotten off the ground if we had to get a lease,” he says. “Frederick County is an ideal location to start a life sciences company and FITCI has provided a great network of fellow entrepreneurs and access to city, county and state resources that helped RoosterBio grow —especially in the critical early years. Participation in FITCI’s network and resources have enabled RoosterBio to grow much more rapidly than if it had gone at it alone.”

The next step for Gardner is trying to help foster more collaboration between FITCI and Fort Detrick. Much technological innovation comes out of the military base, although the focus for Fort Detrick has always been strictly with the government and not on developing commercially viable products. Gardner sees FITCI as a facilitator in developing ways to transfer some of the base’s technology to a broader, commercial market. “What we’re really trying to do, we always had a strong link at Fort Detrick and we want to leverage that technology transfer,” Gardner says. “They use it for themselves because they are not allowed to commercially develop.”

For Brady, the future is self-sufficiency. She is pushing FITCI “towards financial sustainability,” and says that will be accomplished by continuing to invest financially in its clients. “I want this organization to go from a CEO-driven to community-driven organization,” Brady says.