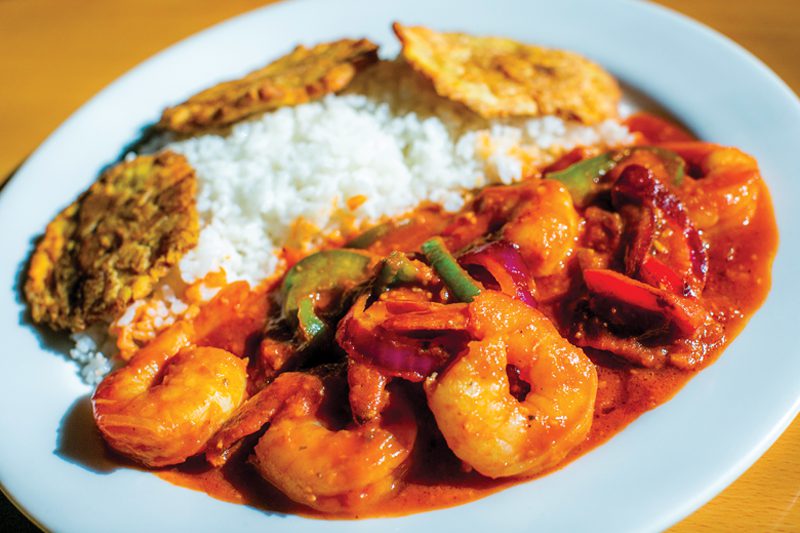 Soulful Tastes of the Caribbean Overflow at Sabor de Cuba

Home is more than where you sleep and stow stuff. It’s shorthand for the comfort of a familiar setting, usually surrounded by people we love. It is the culture and experiences that flow through us, shaping our understanding of the world. We carry “home” with us. For chef/owner Maikel “Mike” Gattorno and his partner Irieska Caetano, sharing food is the ultimate expression of that warm feeling and the impetus behind Sabor de Cuba.

Gattorno was born in Cuba but fled to Miami as a toddler with his mother, father, sister and grandparents as part of the famous Mariel boatlift in 1980. Drawn to cooking, he learned traditional family recipes. Wheels started turning when Caetano, who is trained in business, noticed the site at 9 E. Patrick St. was available. She says, “I love Frederick and I love Cuban food! I had been living in Frederick for six years at the time. There were great restaurants, but there wasn’t anything close to authentic Cuban cuisine. I knew one of Mike’s dreams was to one day own his own restaurant. I was looking to start my own business, so we figured we should partner up and make it happen.”

The building’s enameled façade conveys a sense of tropical white sand against blue ocean, but the colors are a residual of its decades-long history as the Snow White Grill, a beloved hamburger joint opened by Hansel and Nellie Hurst in 1939. In its heyday, that small chain operated from Baltimore to Hagerstown, down to Martinsburg, W.Va., and Winchester, Va. Frederick was its first location. Until it closed in 2004, the space remained frozen in time with a chrome-accented lunch counter and signage boasting 5-cent burgers. Then Tajitu Ethiopian restaurant moved in, operating until 2011.

Today, the only hint of chrome inside the place gleams in original photos of Cuba’s iconic antique cars. The restaurant’s cream-colored interior is also decorated with works by Antonio Gattorno, an internationally recognized painter who was a contemporary of Ernest Hemingway and distant cousin of Mike Gattorno. Brass chandeliers and sconces add tropical flair with lilting frond accents, high-lighting a stamped tin ceiling. A nook at the back is decked in Tiki hut fashion with strings of lights, bamboo and a fringe of dried grass suggesting an awning. Caetano says that whimsical feature always makes her smile. “It’s very popular for small private parties and rehearsal dinners. It gives people a Caribbean feeling in Downtown Frederick.”

When we visit, only a handful of hardy souls scurry between cars and buildings on a chilly evening, many toting to-go containers. Enticing aromas spill into the night, teasing the senses. Above, a starless black sky seems to encapsulate the experience, as if all of creation was only a few glowing blocks. Despite the dearth of pedestrians, Sabor de Cuba is nearly full, with a growing queue of patrons filing in. A birthday party of 10 fills the “hut,” punctuating the hum of conversation with laughter as they pass carafes of ruby sangria. Platters of sizzling shrimp, a popular appetizer, wafts by on smoking iron platters, trailing an intoxicating scent through the narrow dining room. Overhead, Caribbean rhythms play softly.

Appetizers range from empanadas (pastry filled with ground beef or chicken) to croquetas de jamón (ham croquettes), tostones rellenos (savory plantains stuffed with beef or shrimp) and papas rellenas. Papa is the Spanish word for “potato” and relleno means “stuffed.” The resulting dish is a crisped shell of mashed potato around a hearty portion of mildly spiced ground beef. It’s served piping hot and garnished with a creamy sauce bursting with garlicky tang and a hint of cilantro.

One of Sabor de Cuba’s top-selling entrées is pollo a la plancha. That’s a citrus-marinated chicken breast, thinly cut and seared on a grill until flecked with brown and juicy inside. It’s served with a generous scoop of white rice, a cup of creamy black beans and crispy tostones (twice-fried rounds of green plantain). Of course, Sabor’s Cuban sandwich is always a winner, too, at lunch and dinner. Fans also rave about the red snapper, which may be served filleted or whole on occasion, and the citrus-spiked pork shank with garlic and onion known as pernil. One regular patron, a self-described foodie, offers advice. “Mix the pork with the sweet plantains and rice. Then eat it all together. It’s the best flavor profile in town.”

Caetano’s favorite is the camarones (shrimp) enchilados. Different than Tex-Mex enchiladas, this version is a saucy Creole-style dish with simmered tomato, onion and peppers. The bistec (steak) enchilados is a slightly spicier version. The same marinated, hand-filleted top sirloin is used in the palomilla but chef Gattorno kicks up the heat with nontraditional jalapenos.

Cuban food shares components and techniques with Puerto Rican and Dominican cooking. Most ingredients are readily available here, but a few items are special-ordered for authenticity: Spanish cured chorizo, certain vinegars and spices and a Cuban coffee that isn’t distributed in the United States. The cuisine’s hallmark flavor, sofrito, is a mix of freshly blended onions, peppers, garlic and cilantro. And while Cuban food isn’t usually spicy, Sabor’s optional custom mojos (sauces) incite a mouth-tingling effect. Caetano notes, “We try to keep everything as authentic as possible, however, some guests enjoy a little extra spice.” There’s a habanero mojo, too.

For complete tropical indulgence, adults can add a signature drink. Happy hour is Monday to Friday from 3 to 6 p.m. The place is known for its mojitos, but there’s a mean jalapeno-infused margarita and a fruity rum punch called the Hemingway Martini. Desserts include two versions of cool, creamy flan, classic tres leche cake and guava-cheese empanadas.

One thing is sure, you don’t have to be Cuban to appreciate a meal at Sabor de Cuba. Caetano sees food as a cultural bridge. “We all need to eat. By trying food of different cultures, you can get a glimpse into how others see the world. If you try a dish from a culture you are not familiar with and enjoy it, you might look into how that dish was created or the story behind it.” Expanding that horizon makes more of the world feel like home.