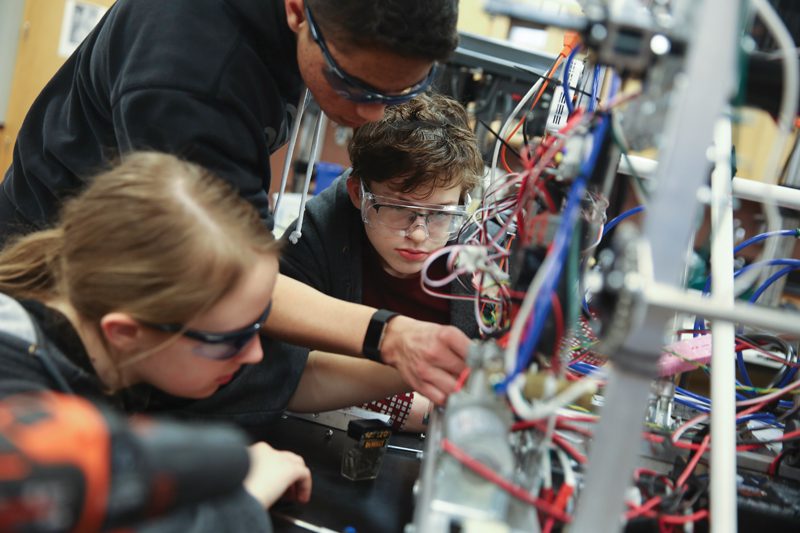 It’s Friday at 5 p.m., and a team of students at Tuscarora High School is poring over a large robot in a hallway at the school, trying to figure out why it’s not receiving commands. They’re adjusting wires, checking connections and testing commands with a computer. It’s decidedly not a conversation for laymen. But it’s very, very cool.

The students are part of a team of about 30 that competes in the FIRST (For Inspiration and Recognition of Science and Technology) Robotics Competition. They create a robot that enters a 27-by-54-foot arena, then completes a task, which changes every year, using both programmed and remote-controlled commands. The robot is equipped with a camera and able to “read” special light-reflecting tape on a faux-rocket to trigger specific actions.

This year, the competition mimics making repairs in space. Tuscarora’s team will join with two other teams on the day of the competition and work together to load the rocket. The robot rolls to a rocket, removes a panel, and loads it with cargo—in this case, a giant rubber ball. The robot needs to be able to complete a variety of delicate motions, plus deal with unwieldy, awkward shapes, like the rubber ball.

It’s more complicated than that, though. The rocket has three panels at different heights: 30 inches, 60 inches and 82 inches. Tuscarora’s team strategy is focusing on a robot that will be great at the first height, so on the day of the competition, they’ll be attempting to find partners to complete the task. It’s one of many life skills students get from the program, according to Joshua Holmes, who oversees Tuscarora’s robotics program.

For the students, the chance to get hands-on experience with technology is a recurring theme in what draws them to robotics. “I think it’s just the application of programming skills that I like,” says Faris Prasetiawan, 16. The junior joined the team last year, but had previous experience working with robotics in middle and elementary schools, as well as some LEGO robotics programs. “It’s the first time I could take a class and apply it to something real. If you spend a whole day trying to figure out an algorithm and it finally works, it relieves all the stress you have.”

Sophomore Febe Rodney, 14, joined the team this year after hearing about it from friends and in her engineering classes. She plans to go into software engineering and thought the robotics program would be a good fit. “I know lots of people here from math classes and engineering classes—I’ve known them from around school,” she says. “A lot of them have skills I want to attain.”

Junior Ethan Durham, 17, joined this year at the urging of Prasetiawan and is focused mostly on programming, rather than the hands-on building part. But he says his favorite part of being involved with the robotics team is seeing his work in the real world, as opposed to digital simulations. “It’s cool being able to write a line of code and see it do something,” Durham says. “It runs into something I don’t see in a virtual world — I can’t set gravity at four in the real world. This is so cool, learning about the programs you can run. Buying a camera with a computer on it to process things has just been really fun.”

Despite being on the Tuscarora team, both Durham and Prasetiawan are from Middletown High School. Since there are only a handful of schools fielding teams, students are able to join other teams. Other schools with FIRST Robotics Programs include Frederick, Governor Thomas Johnson and Walkersville high schools, according to Kim Day, science, technology, engineering and math (STEM) coordinator with Frederick County Public Schools. There are also schools with smaller robotics teams that compete in different competitions, including Brunswick and Oakdale.

“We really try to encourage those extracurriculars, as well as build our courses so that kids have those opportunities,” Day says. “You have to have a teacher willing to put in the time after school to do it. A lot of these teachers are really amazing, dedicating so much time after school and on Saturdays —the tournaments they do are all-day sorts of things.”

The teams do a lot of their own fundraising—robot parts can run into the thousands of dollars. Day says she supports the teams by acquiring grant funding, like one provided by the Maryland Department of Education for the last two years to support robotics programs. “Each of the teams has an element of giving back, as well,” Day says. “Part of the FIRST Robotics Tournament is they need to share what they’re doing with other people. It’s really fun for our elementary kids to see that. They’re trying to build that pipe-line. It’s a growing area that kids are interested in and teachers are interested in encouraging that in kids.”

The students at Tuscarora help run summer camps for younger children, teaching robotics in a simpler fashion, and the money raised from camp admission helps fund the team.

Holmes has been coaching the team since 2011 and has seen the program grow greatly in that time —including a trip to the world championships a few seasons ago. He has experience with basketball and says coaching the kids in robotics brings a lot of the same excitement. “I like working with the kids and seeing them enjoy it too,” he says. “They don’t really get an experience like this. We have pre-engineering programs, but it’s not a high competitive level like this.”

Holmes says the best part of working with students is watching them grow in their abilities, and eventually begin teaching others. “It’s a good opportunity for them to get hands-on experience,” Holmes says. “A lot of kids don’t even know how to use a hand tool, so we do introduction training. They build a little cell phone holder to introduce them to it. They go from struggling with the tools to leading their own group of kids.”

Senior Michael Harris, 17, is in his second year with the team and believes exposure to STEM fields is much more fun when competition is involved. He relishes the hands-on experience. “It’s one thing to hear everyone talk about the potential of the STEM fields, but it’s a completely different thing to be engaging with it, not just in a classroom environment, but actually participate in a competitive environment,” he says. “I’d hear about it in class, and all the potential for it, but there wasn’t really an outlet for the skills or to apply them. Being here with professional engineers exposes you to it and teaches you new skills, like problem-solving and communication skills—it’s the perfect learning environment.”