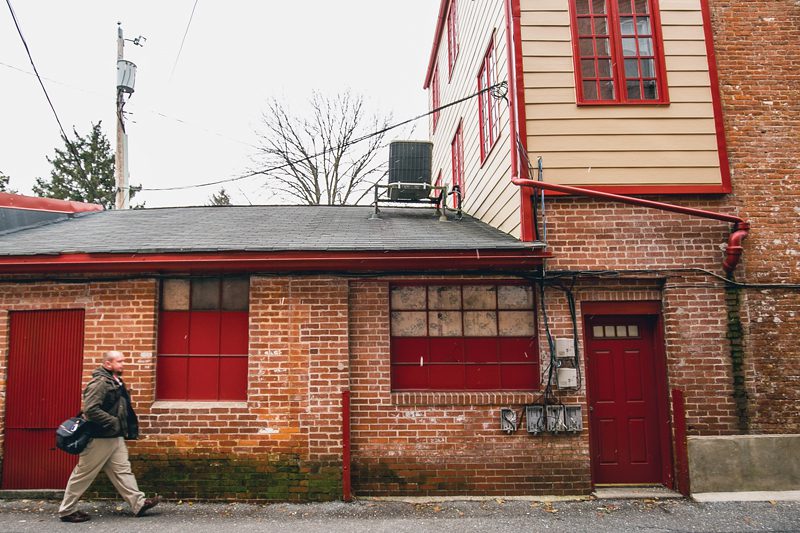 Traffic. It’s a bit… much. And, like the weather, people talk about it incessantly. Drivers kvetch about the lines of cars they encounter daily on the interstates, major thoroughfares and neighborhood streets. Even secret short cuts seem to have been outed as streams of taillights fill every drivable gap.

The streets may be jammed, but Frederick’s alleys are eminently drivable, bike-able and walkable. They are also visually appealing. Peek over some of the alley walls. You’ll find well-groomed yards and lush gardens. The city is enhancing existing alleys and requiring new developments to create shared-use paths. It’s all part of a plan to make the mean streets less mean, and the green spaces more green.

Frederick’s original street grid included alleys as loading and parking zones and back entrances to businesses and residences. Today, they serve the same functions—and then some. They help drivers avoid red lights and crowded intersections on busy streets. Their names serve as tributes to some of Frederick’s prominent citizens and businesses. And, they are part of a growing walking and biking culture.

Alderwoman Kelly Russell says the alleys are increasingly used by bicyclists, joggers and walkers, in addition to drivers and the city’s Bicycle and Pedestrian Advisory Committee is determined to provide access for all users. She says the alleys are distinctive pathways through the city and attract health-conscious residents and tourists. “People are willing to walk farther if there is something to look at along the way,” she says.

Which makes alleys more than just passageways tucked out of sight. “They are neighborhood gathering spots,” Russell says.

What’s in a Name?

If you could characterize any alleys as strategic throughways, Maxwell Avenue and Chapel Alley fit the bill. Both are located in the center of town. Maxwell begins at 8th Street and takes vehicular traffic south through town, crossing over East Patrick Street and ending at the C. Burr Artz Public Library. Locals often mistakenly refer to it as Maxwell Alley. It was once called Middle Alley, but was ultimately re-named for Elmer S. Maxwell, a city engineer who was active in the 1920s, according to Olivia Millunzi at Heritage Frederick.

In addition to being a handy, drivable route, it’s popular with walkers. In fact, in an effort to encourage cars and pedestrians to stay safely in their own lanes, “Maxwell has painted a sidewalk, so to speak,” says city transportation planner Tim Davis. A white line delineating a walking space and a pedestrian symbol appear on the portion of the alley that runs from 2nd to Patrick streets.

Cookie Larkin has lived in a condo at 102 E. 2nd St. for 18 years. The property backs up to Maxwell Avenue and is a cozy spot. “We sit out in the backyard and we’re sitting in the middle of Downtown. The alley traffic doesn’t bother us,” she says.

She shares the outdoor common area with her neighbors, Cindy and Russ Olson. “I love this house so much I don’t care if it’s on a freeway or in an alley,” says Cindy. “We use the alleys all the time—walking and driving. We have a beautiful view of church spires.”

Chapel Alley runs north through town from East Church Street to West 7th. Like Maxwell, it accommodates vehicular traffic going one way, but pedestrians use it as a two-way path. It gets its name from St. John’s Chapel, as St. John the Evangelist Roman Catholic Church on East 2nd Street was called in the 1830s. The name is fitting as the alley runs past the former Visitation Academy grounds and is in the shadow of many houses of worship.

Add Klinehart’s Alley into the mix and you have three routes for traveling north and south while avoiding traffic lights. Klinehart’s is an extension of North Court Street running from West 3rd to West 6th streets. Unlike Maxwell and Chapel, the origin of its name isn’t clear. According to Heritage Frederick, the name Klinehart’s Alley appears in The Frederick News-Post in 1884 and by 1895 is listed in phone books. While it’s a family name appearing in phone listings, there’s a gap of documentation regarding the official naming of the alley.

There’s a process to naming streets and alleys. According to Matt Bowman, technology manager for the City of Frederick, developers submit a list of potential road and alley names to the city. “Usually there is a common theme for a neighborhood, but this is not always the case,” says Bowman. The names are run through the county’s master list. “County Emergency Services does not want duplicates due to dispatch issues that may arise,” he says.

In 2000, the city completed a project to name the unnamed alleys. Proposed names were solicited from the community, cleared through the streets and sanitation committee and recommended to the mayor and board of aldermen. “This was started as a public safety issue. Police and fire departments needed street names to ensure quick response,” says Joe Adkins, deputy director for planning.

Frederick County Fire Capt. Steve Schultz, who works at Citizens Truck Company on South Court Street, says the project worked well. He says there are a number of businesses and homes that are in alleys or can be readily accessed through alleys. With exact street and alley names and addresses, firefighters don’t have to estimate locations within a block. “It gives us a very quick reference. The city saw the need and it is a huge help for us,” he says.

Some alleys are named for people who have served the community. In 2005, the board of trustees for the Beth Sholom Congregation petitioned the city to change Motter Alley to Kosman Alley, to honor Rabbi Morris Kosman, its spiritual leader for more than 40 years. The alley runs adjacent to the synagogue on North Market Street.

Laboring Sons Alley was named for the adjacent Laboring Sons Memorial Grounds. The land was originally an African-American cemetery established by the Laboring Sons Beneficial Society in 1851. In 1949, the city built a park over the gravesites; in 1997, the city acknowledged it had paved over a cemetery. In 2001, a memorial sculpture was placed at the rededicated burial grounds. The alley serves as a pathway to the site.

McClellan Alley, located off College Avenue, is named for Frederick veterinarian and longtime Maryland State Del. James E. “Doc” McClellan. He served four years on the city’s board of alderman and 16 years in the state legislature in Annapolis and was credited with helping secure state funds that supported many projects in the region and were critical to Downtown Frederick’s renaissance.

Frederick’s alleys can be good for business. Just ask Cherie Nearman, co-owner of Hootch and Banter. The restaurant and bar is located on the corner of South Market Street and Citizens Way. The alley is named for Citizens Truck Company, the fire house a block away. Nearman says the alley helps her customers access the nearby parking garage and encourages foot traffic. “It’s not creepy, it’s well-lit,” she says. It’s also handy for delivery trucks. “All of the deliveries come through Citizens Way,” she says. While she finalizes details for an expanded coffee shop area, she is keeping aesthetics in mind. She and other business owners have discussed stringing decorative lights across the alley. “It could be super cute,” she says.

One Downtown alley stands as a memorial to a business that was established in 1959 and closed last year. Fox’s Alley off South Market Street was named for its proximity to Fox’s Sport and Bait. It was opened by Frederick resident John Fox and sold to Willian Offutt Jr. in 1971. The alley bypasses the store and one of the entrances to Mount Olivet Cemetery.

The Complete Streets Policy adopted in 2016 sets out to enhance access and mobility for all users of streets (including alleys) by improving safety and reducing conflict with non-motorized transportation, like bikes. Alderwoman Russell says, “All new communities are required to build shared-use paths,” she says. The result will be much greater connectivity from neighborhood to neighborhood.

In addition, in an effort to educate and encourage drivers to share the road, the city is upping its bicycle game. If you travel North Market Street between 7th, 8th and 9th streets, you can’t miss a new bike lane with a distinctive green box painted on the road. It is part of an awareness campaign to show automobile drivers how they must share the road on straightaways and through intersections. “The law requires that you give bicyclists three feet. Bicyclists have the same rights and responsibilities,” says Russell. Frederick is designated a Bicycle Friendly City by the League of American Bicyclists and currently has a bronze rating.  The city hopes to point to these new accommodations and others when it applies for an upgrade to a silver rating later this year.

For those who live near Frederick’s well-traveled alleys, sharing the lanes with all users comes easily. Back on Maxwell Ave and 2nd Streets, Cindy Olson enjoys a bit of the great outdoors in the middle of her Downtown alley. As cars, bikes and people make their way past her yard, she reminisces about other visitors. “We had a mother duck lay her eggs under our fern,” she says. She and the other condo residents were delighted as they watched the eggs hatch and the mother care for her young. “My husband opened the door and I watched as she took her ducklings down the alley.” That is the very essence of a shared-use path.