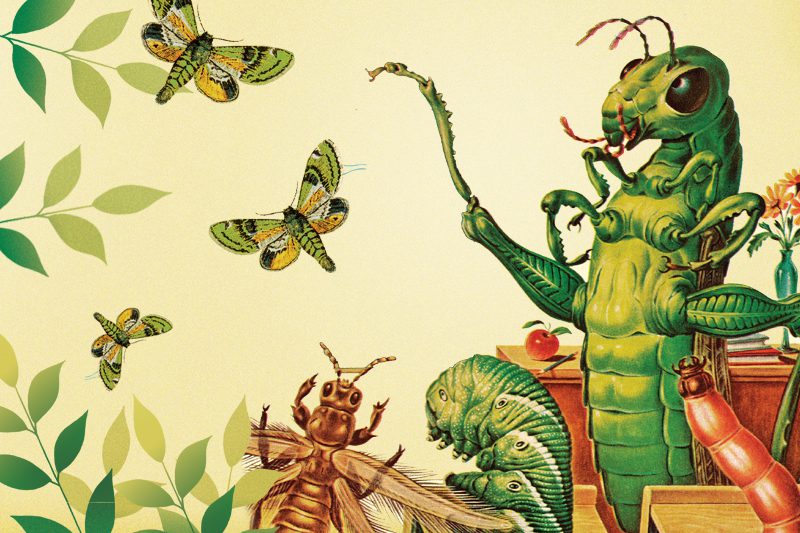 If you’re thinking such a voracious appetite must have consequences, you’re correct. The spotted lanternfly’s damage has the potential to affect beer, wine, local food, forests, landscapes and pretty much every plant in between.

While it has avoided Maryland so far, the spotted lanternfly is expected to become a serious pest in the state within the next few years since it has already been found in Pennsylvania and Virginia. The pest first reached U.S. soil in a load of stone from China that was delivered to a Pennsylvania quarry. It was then accidentally transported to Virginia with stone hauled from the quarry on Interstate 81. It has Maryland surrounded.

Even worse news is the spotted lanternfly is only the latest in a long list of invasive pests and plants that continue to alter our local ecosystem, food supply and even our timber resources. Yes, they can wreck your home garden, too.

Many of the invasive pests, diseases, and plants found in the United States originate from East Asian countries, particularly China. Transported in packing and shipping materials, on nursery stock, and even on raw materials, these invaders find a foothold because the climate is similar to their homes, but with few-to-no natural predators to keep their population in check. (In case you’re wondering, we give as much as we get. East Asian countries are full of pests originating from the United States; importing and exporting goods, while necessary, comes at a cost not always tallied on the price tag.)

One of the most invasive pests in the United States is the gypsy moth, a silk moth native to Europe and Asia that was accidentally introduced to northeastern forests in the 19th century. Since its introduction, the gypsy moth has spread south to the Mid-Atlantic and west to Wisconsin.

Gypsy moth caterpillars are generalist feeders, meaning that they will eat leaves from a variety of trees, but they favor oaks. The City of Frederick Municipal Forest and Watershed was ravaged by the furry caterpillars in the 1980s when several hundred acres of oaks were repeatedly defoliated over several years, stressing some of the trees to the point of death.

The latest gypsy moth outbreak was 2006-09 and it wasn’t just the watershed that was affected. Nearby land in Catoctin Mountain National Park and Gambrill and Cunningham Falls state parks also suffered damage. “At the end of the last outbreak, two diseases, a virus and a fungus, helped to cause a population collapse [of the moth]. Since that time, the diseases have helped maintain gypsy moth population at a level where it would not likely cause damage,” says Tom Lupp, regional entomologist for the Maryland Department of Agriculture.

In addition, a naturally occurring bacteria called Bt that attacks moths and butterflies can be sprayed once the gypsy moth population exceeds ecological thresholds, but according to Lupp, the last time the forest needed treatment was 2009. “Populations are monitored annually throughout the county,” he adds.

Even with these management options, there are still pockets of loss and it doesn’t end with the death of the trees. Hundreds of trees up to 70 feet tall stand dead and leafless in groups, leaving sunlight baking the forest floor where it hasn’t shone in decades and charging up the seed bank that had been idle for years. The young oaks that germinate in the new sunlight patches are in competition with invasive plants, such as the mile-a-minute vine, which grows every bit as fast as its name implies. Mile-a-minute smothers the entire forest floor so that it’s the only thing growing. It’s a prolific producer and its seeds last for at least seven years, meaning a consistent attack with herbicides is the only solution.

The invasive vine crawls along the ground, twining its way around plants, blocking out the light. Tiny hooked thorns grow along the stems and the undersides of the leaves, hooking into soil, pant legs and even skin. Its other name is tear-thumb and trying to remove a small patch of it without gloves will draw blood.

The emerald ash borer, a small metallic-green beetle from Asia, was first discovered in Michigan in 2002, likely transported on packing material. The beetle was first found in Maryland in 2003. The borer adults lay eggs in bark crevices June through August. About two weeks later, larvae emerge and burrow through the bark and feed on the thin layer of living tissue that transports water and nutrients throughout the tree. As the larvae tunnel, they girdle the tree from the inside, cutting off its resources. They emerge as adults by chewing tiny D-shaped exit holes through to the exterior bark. Ashes not treated with insecticides will be dead within two years after initial infestation.

Ashes were excellent street and landscape trees, with very few pests and diseases, until the emerald ash borer. They occur in pockets in the forest and can easily be spotted because the bark has usually been picked off by woodpeckers looking for the juicy larvae. By the time the exit holes and woodpeckers are noticed, it’s often too late to treat the tree.

Ash becomes brittle when it dies and will shatter when it hits the ground. Their loss often leaves large pockets in the forest or landscape because they are found in groups. Mile-a-minute is a common invader after ash death, similar with the way it creeps into holes left by large oaks.

Each new invasive plant or pest threatens the ecology of its new environment because there are no natural predators yet to manage the population. Specialist pests, such as the hemlock woolly adelgid, a small insect that attacks only hemlock trees by sucking out the sap at the base of the needles, require specialized treatment. These insects originated in Japan and were introduced to the East Coast states in the 1950s. Adelgid can kill hemlock trees in only a few years.

Hemlocks create shade along streams and their deaths can result in temperature increases that affect trout and other fish, as well as altering bird and other animal populations. Loss of trees along the stream also allows invasive plants, such as stiltgrass, to move in, making it difficult for native plants to grow in the space.

Lupp and his team treat hemlocks with trunk injections, soil injections and pellets placed in the soil at the base of the tree. “In addition to chemical treatments, we have been releasing predatory beetles.” The beetles are being released at six sites and monitored annually, but “it will take time and additional releases to establish a level that should help maintain the adelgid population at a non-destructive level.”

One of the first disease alterations to the landscape was brought on by chestnut blight, a fungus accidentally introduced into the Bronx Zoo, likely on imported chestnut trees resistant to the fungus. By 1940, the disease had wiped out the American chestnut populations in the Appalachian Mountains from New York to Georgia. Frederick County’s chestnuts were not spared. Remnants of these trees can be found throughout the watershed forest, where saplings continue to sprout from the stumps. The fungus does not kill the root system, but damages new saplings by creating cankers that affect the tree’s ability to move water and nutrients throughout.

Chestnuts once were the best mast (nuts or seeds) producers in the Appalachian region until they were lost to the fungus. Oaks slowly began to take their place and had succeeded until the first gypsy moth infestation. Each opening in the forest leaves space for new plants and for tree seeds to germinate.

The spotted lanternfly could be one of the invasive species that destroys tracts of forest in a matter of months, permanently altering the species mix. Rare, threatened and endangered species that are clinging to critical habitat may lose more ground or disappear altogether.

Maple, black gum and sweet birch are fast-growing trees that take advantage of any small bit of sunlight and grow fast and tall to fill in the holes. These species produce seeds with lower nutritional value and are not the primary food source for animals living in the forest. Often, tree species that grow quickly are pioneers in reforesting a field, encroaching from the edges and filling in more each year. Though these aren’t invasive species, the gaps that are left from tree deaths can lead to major changes in the forest and animals it supports.

The openings in the forest also allow for other invasive plants to take hold. One of the most aggressive invasive species is the Japanese barberry. Often selected for the landscape because of their brilliant-green or deep-maroon leaves, these spiny shrubs are heavy seed producers and will germinate wherever they land. Birds carry them to forested areas. Creeks carry the seeds and deposit them on downstream banks. They can be carried in pant cuffs, boot treads or vehicle tires.

Japanese barberry grows in a way that traps humidity, a necessity for ticks. Black-legged ticks, carriers of Lyme disease, are becoming more common in Maryland and controlling their habitat is one way to reduce the chances of getting infected. Studies have shown that forested areas where barberry has been eliminated or well-managed saw a reduction in tick population for about five years after the initial efforts. Eliminating barberry altogether from small landscapes can significantly reduce tick populations for extended periods of time.

Bush honeysuckle, now a widely spread invasive plant, is found throughout local stream corridors and forests. Their berries move around the same way barberries are spread. These shrubs can grow to 20 feet and their trunks reach several inches in diameter in some cases. Invasive honeysuckles leaf out a few weeks before the natives and stay green later in the fall. Meanwhile, the native honeysuckle, an excellent source of nectar for hummingbirds and bees, is a slower grower and doesn’t compete well for space.

In some cases, plants were introduced purposefully into the landscape before much was known about the impact of invasive species on native habitats. The autumn olive shrub was once distributed by Soil Conservation Districts because of its benefits to wildlife and creating windbreaks. While the autumn olive does provide food, the berries are not as desirable for wildlife as those from native trees and shrubs, and the autumn olive quickly took over forested areas and displaced native plants.

The Japanese angelica tree follows a similar trajectory to other invasive species, except that it has a near perfect doppelganger in the native devil’s walkingstick. Except for the leaf veins and a slight difference in the flowers, the trees look identical. Both have stout twigs with thorns throughout the plants with white flower clusters. More and more angelica has been found in our local forests, directly displacing devil’s walkingstick.

Along road sides, in landscapes, and throughout our forests, tree of heaven, also called Ailanthus, grows in groves, sprouting hundreds of new twigs from the large seed clusters and directly from the roots. It is often confused with black walnut or sumac because of the leaves, but the similarities end there. Black walnut has a deep furrowed bark, large green fruit and smells spicy when the twigs are broken. Sumac develops large, fuzzy, red seed heads on top of the twigs. Tree of heaven bark is smooth and light-colored and the twigs smell like rancid peanut butter when snapped.

Curiously, there is one insect that finds tree of heaven irresistible—that ravenous spotted lanternfly. Experts are unsure if the pest needs Ailanthus to complete its life cycle or if it’s just a favorite meal.

Because the lanternfly is such a new pest, local entomologists are unsure if there are natural predators that keep lanternfly populations in check in its native land, but there is research being conducted now. That’s important, because you haven’t heard the last of the spotted lanternfly.