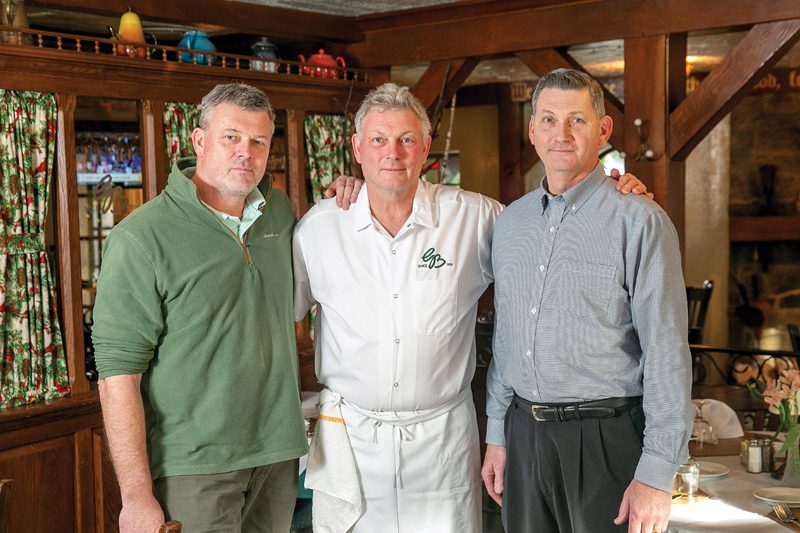 Pride is a loaded word. In its negative, it denotes a conceited smugness, often born of self-assigned superiority over another. It’s a common human foible we see clearly in others. In its higher form, pride describes a sense of obligation to the loftiest standards; dignity in service or creation. It speaks of devotion. That’s the version embraced by John, Stephen and Bobby Gladchuk when they talk about their 30 years as partners in Gladchuk Bros. Restaurant.

It’s a bright spot, dressed in bold yellow and steely blue siding, accented with deep forest greens and wrought iron, near the point where West Patrick and South streets converge. In its previous incarnation, the location was a casual carry-out. Throughout their tenure, these New England-born brothers lovingly transformed the place, piece by piece. The visual appeal is distinctly Colonial, a cozy cottage-turned-roadside coach house with a wood-shingled mansard roof and ivy creeping up its billowing brick chimney. Inside, patrons are greeted by a cluster of high-topped tables in front of a marble bar, gleaming white through ardent rays of midwinter sun. A stone fireplace contains a welcoming blaze beneath a sturdy wooden mantle, flanked by arched windows in deep recesses.

Bobby recalls building the hearth. With a nod and a deep breath, he says, “We went down to Rockville to get all those rocks.” He and Stephen put in a brick walkway last spring. “That’s part of the fun. We have a large group of customers who enjoy watching us do little things together, one year after the next.”

After three decades, even their customers feel some pride of ownership. They bring the brothers gifts, such as the numerous collectible beer steins on display, and return often for homestyle dishes that bridge European aesthetics and American tastes.

Stephen runs the front of the house, greeting customers and turning out most of the restaurant’s enticing desserts. Bobby handles the business side of things, as well as creating a showstopping gingerbread house for the dining room each holiday season. Brother John is head chef, but all three men cook and bake, jumping in wherever needed. John got his start as an apprentice to great European chefs at grand hotels in New York City, Chicago and Florida’s vacation hot spots. “We are a supporting cast to him in some ways,” says Bobby, describing the synergy of the fraternal relationship. “It’s beautiful because we all need each other. We all bring a certain something to the dynamic. It works.”

Baking is a cornerstone of the establishment. For a while, John and Steve owned a wholesale/retail bakery business in Washington, D.C., but diners in Frederick benefit now. Each guest is served an airy white roll and a cheery muffin to nibble while perusing the compact menu. The sample we tried was moist and tender with a tang of fresh blueberries settled among golden crumbs. The server grinned broadly, teasing, “These will ruin you for anything out of a box.”

Seafood, a hallmark of coastal culture in Maryland and New England, features prominently at Gladchuk Bros. Sea scallops and Nova Scotia salmon, North Atlantic cod and briny oysters are delivered daily. Bobby admits he is a lobster guy who now loves blue crabs, too. Maryland’s signature crustacean always shines in crab cakes, but it may also be tucked between meaty fish fillets or packed into broiled mushroom caps, even baked into a creamy dip with spinach and artichoke. Sweet shrimp crowns creamy Parmesan sauce over house-made pasta while delicate trout pairs with almonds and browned butter.

On any given day the menu may feature traditional favorites such as meatloaf, eggplant Parmesan or hearty pork roast in mustard cream sauce with sauerkraut and homemade applesauce. Diners may indulge with cheese-laden chicken Cordon Bleu or roast Long Island duckling spiked with Grand Marnier. A rare find these days, velvety chicken livers, are offered deep-fried with onion-studded brown gravy and rashers of crunchy bacon to mitigate their earthy, mineral bite. From humble to elevated, classic Beef Wellington is a celebration dish of thick-cut tenderloin wrapped in puffed pastry with duxelles (minced mushrooms with shallot and herbs) and classic French demi-glace. “All of our sauces are done in the morning,” says Bobby. “They are fashioned from stock made the day before with long, slow-simmered bones. That brings a lot of flavor to a dish.”

He is personally fond of the cheesy scalloped potatoes and Polish specialties. Fellow fans gobble gołąbki (pronounced “go-LUMP-key” for the uninitiated)—cabbage leaves rolled around ground beef, pork and rice then braised in tomato sauce—with pierogi and kielbasa. Borrowing from Germany, the restaurant also serves bratwurst and knockwurst paired with sweet red cabbage (czerwona kapusta). All are best eaten with house-made rye bread. Bobby beams, “It’s old-school recipes right out of our babcia’s (Polish for grandmother) kitchen.”

If you crave dessert, he offers, “Stephen’s lemon meringue pie is a religion for some people.” The towering raspberry coconut cake beckons, too, making it hard to choose, while the maple crème brûlée is silky and decadent, like a hug in every bite.

When asked if they have any aspiration to appear on network cooking shows now that Frederick has been “discovered,” the brothers shyly demure. It’s not their style to seek the limelight but they are happy to see neighbors succeed in that arena.

“To see my brothers work,” Bobby explains, “with their efficiency and professionalism, is joyful. It really is a rhythm and a way of life. We work together and serve each other and our customers. When you are serving, you are making a difference. We never lose sight of that.”

As he talks, a group of diners pose for pictures in front of the fireplace and a petite white-haired woman grasps Stephen’s hand, saying, “I just want you to know, I don’t get out much, but I really enjoyed coming here today. This was a lovely meal and a beautiful place.” Stephen’s eyes glisten as he offers a heartfelt “God bless you” in return. He sighs as she turns away but there is no time to revel in the glory. Hungry people are streaming through the front door.