Art with a Message 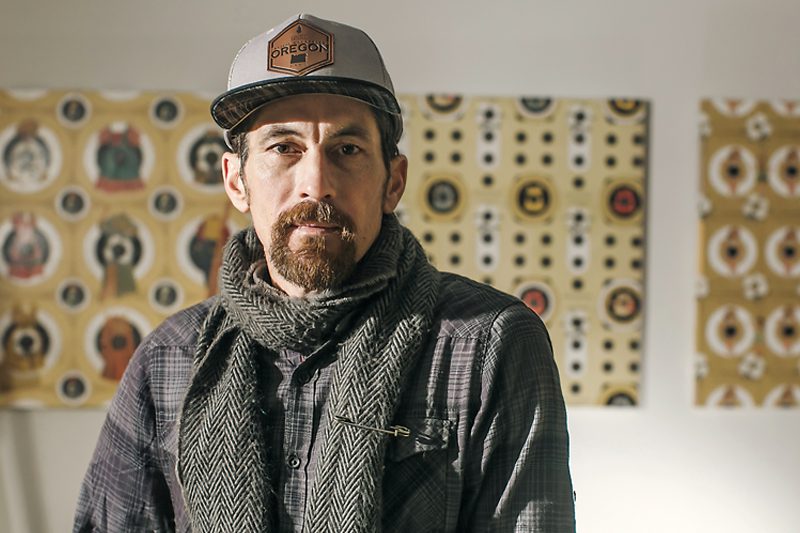 Brian Slagle has Much to Say In Colors, Pictures and Words

Artists always have something to say. Often, it is obvious and right in your face—but sometimes it can be something that takes a second look and thoughtful contemplation to understand.

Frederick artist Brian Slagle pursued art for art’s sake when he was a student right out of school.  He pursued a profession as a graphic designer, but says, “It was too tight for me.” He and his wife, Kate, who is also a graphic designer, met in second grade, and later as professional artists they collaborated on urban design.

When the second Iraq war started, so did his political work. “I moved from personal art that feels good to being a little more outspoken,” he says of the direction he still guides his art.

His work now has a rather clear message, but you have to understand what you’re looking at in his art. Currently it reflects the “state of affairs of the nation,” as his source of inspiration. “People often say stuff like, ‘Not to get too political, but …,’ like it’s a bad thing to talk about politics in art. I think my art has always in some way dealt with current issues. Sometimes those issues are personal, political, national or universal,” he explains.

Another source of his current inspiration are his 11-year-old twin daughters. “It’s hard to watch the morning news with them and not be on the edge of my seat waiting for what crazy stuff might come on next. I am trying my best to share with my girls the process of using art as a voice to shed light on things like injustice and inequality.”

“Paper Targets’’ is one of his works that almost distracts from the message with a pretty grid pattern of blossoms and little girls. Looking closer the background of each is a vintage target from an abandoned rifle range and vintage paper dolls in the center of each target. “Scrapbook of a Me Too Era” is similar in its grid-like design (a nod to his graphic arts background, perhaps) then adding pin-up-type photos from mid-century magazines.

But his “Southern Mystique” is the one with the most dramatic and unexpected history. It includes images of the American Eagle, cotton blossoms and African-American dolls and was on display for a time in the entry of a Downtown Frederick restaurant. In deference to critical comments of the work, Slagle agreed to whitewash offensive parts of the work, which in itself is quite a commentary. His feeling is that “it worked out great.”

He certainly isn’t the first artist to take inspiration from political turmoil. He cites Picasso’s “Guernica,” painted in 1937 in gray, white and black, and is regarded by many as one of the most moving and powerful anti-war paintings in history. It was painted as an immediate reaction to the Nazi’s devastating casual bombing of Guernica during the Spanish Civil War.

For art to be inspired by politics is not a new concept. “The difference between propaganda and political art is honesty,” Slagle says.

As another example, he offers the Norman Rockwell painting “The Problem We All Live With” from 1964. It depicts Ruby Bridges, a 6-year-old African-American girl on her way to an all-white public school in 1960 during the New Orleans school desegregation crisis, and is considered an iconic image of the civil rights movement in the United States.

“The state of our nation is a theme that I have often dealt with in my art. I’m not saying, however, that my art, current or past, is inspired simply by current events or political issues. With that being said, the current state of things is pretty messed up, so some of my latest work has been made in an attempt to shed light on issues that our nation needs to fix: racism, sexism, nationalism, gun violence,” Slagle says.

As for the process of how he goes about producing art that speaks the message he intends—well, it’s not quick and simple. “Art, for me,” he says, “is something that builds inside my head long before it ever reaches a canvas or a wall.” It seems very fitting, then, that his current work is done in collage. “If I had to categorize my art, I would use the term ‘bricolage.’” By definition, it is the construction or creation of a work from a diverse range of things that happen to be available. “My inspiration is based on collected ideas and experiences from life, combined with a wide array of different materials and internal ideas that come together in many forms and mediums,” he explains.

He tends to work on a rather large scale. Some pieces are relatively smallish, about 3 by 3 feet, while others range up to 6 by 8. Quite a statement by any standard.

Some of what Slagle hopes his art will influence is the question of who has the right to talk about social issues—and how those thoughts are expressed. “If you can’t talk about it, it’s the artist’s responsibility to express that.” Philosophically, he is expressing in his art his opinion of where our country is—and isn’t. “I can’t help myself from commenting.”

The hope is when people look at his art, it inspires wonder and curiosity, and, when they take the time to understand it, that it will inspire conversation. For his art to stimulate dialogue that leads to peaceful understanding would be the most satisfying outcome of his artistic energy.

Slagle’s other design work has included restaurants in Washington, D.C., and Baltimore, set designs for theaters and several commercial installations. He also tries to influence society in less-dramatic and more eco-friendly ways with the production of seed “bombs” for urban gardens, which is very popular right now. Among the choices of bombs available are “salad” and “wild flower” collections.

Indoors or out, Brian Slagle’s creativity is leaving its mark on society. See his work at www.saatchiart.com/slagleandslagle.