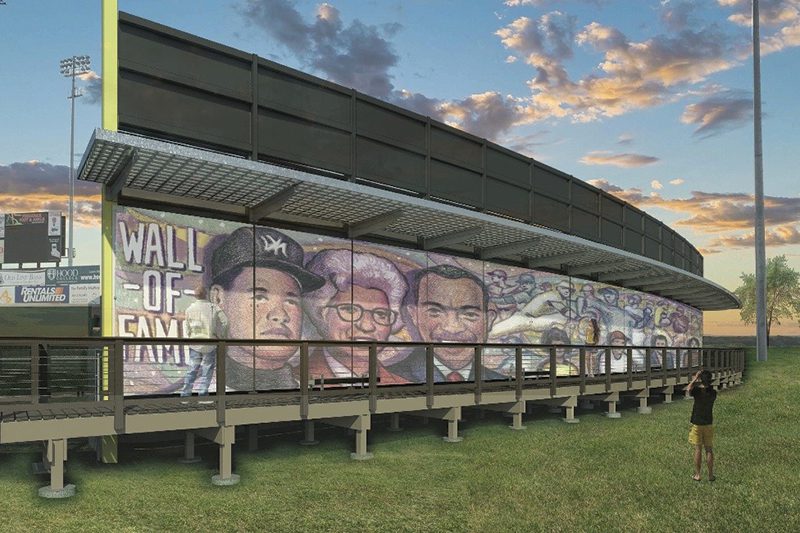 You won’t need to be a sports fan to appreciate the Frederick County Sports Walk and Wall of Fame planned for Nymeo Field at Harry Grove Stadium, home of the Frederick Keys minor league baseball team. The tribute is a combinationof an open-air museum, public art, a park and a draw for visitors to the area. It will feature local sports figures including a New York Yankees great, a race horse, an Olympic gold medalist and a sports writer, says Yemi Fagbohun, the artist creating the 600-foot-long mural that will stand 18 feet tall.

“It brings me joy,” he says, to showcase subjects who not only were standouts in the sports world, but also in their private lives and ways they served their community. The artist, who arrived in Frederick by way of New York from his native Nigeria, has had a long-running appreciation for the county’s natural beauty and the people living here, things that influence his art. He was the creator, for example, of the portraits of noteworthy residents hanging on the McCutcheon’s building on the east side of Frederick, and a mural painted on Thurmont’s former trolley power station portraying north county landmarks.

The Wall of Fame will curve around the outfield, outside the stadium, and many of the faces will be visible from Interstate 70. A roof over the walkway will provide shade and the walkway itself will be part of the design with tiles, some containing handprints of the subjects. An app will be created so visitors can learn about the images they’re seeing. “We want a relaxed, reflective place,” Yemi says, “where you will see something different each time you visit.”

The artwork is expected to be “one of the biggest murals in the world by a single artist,” he says.

Along with Yemi, the core team working on the project—predicted to begin in early spring—includes real estate developer Tony Checchia—“He came up with the idea,” Yemi says; Dave Markoe, past board president of the YMCA where the Frederick County Sports Hall of Fame is located; Frederick architect Bruce Zavos, Taylor Davies of Morgan-Keller, which will be doing the construction; and Sheldon Shealer, a sportswriter who researched the selection of subjects. The time it takes for project completion will depend on how successful fundraising is, with the group anticipating two years at this time.