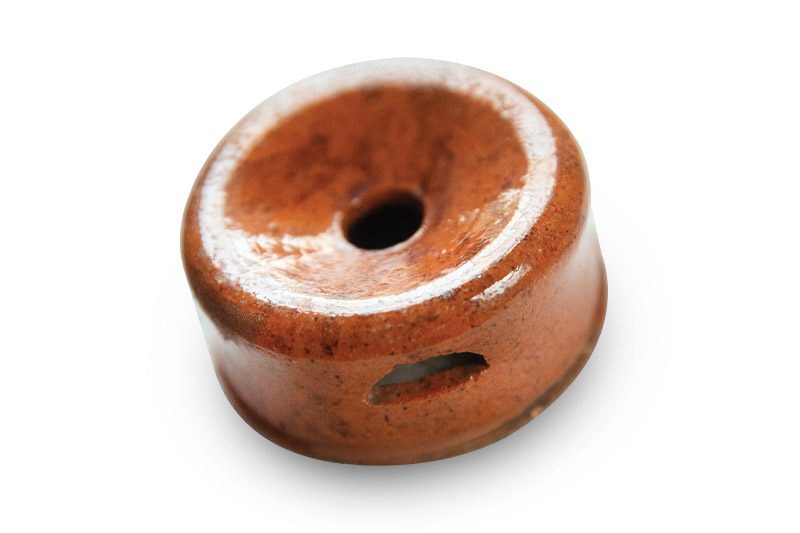 In 1824, at age 27, Frederick resident Jacob Engelbrecht wrote in his diary that he was using ink made from pokeberries. He wanted to see if the dark purple color would last. Fortunately for us, it did, because we can still read his diaries today. From 1819 to 1878, Engelbrecht recorded the daily life around him. He served the community as a tailor, city alderman, mechanic, musician and mayor, so his observations are rich with many perspectives.

He probably wrote with a quill in the early years and later a pen that had a handle and a metal point. Regardless, he would have needed an inkwell. These devices stored the ink and had a hole at the top in which to dip the writing instrument and draw in more ink.

Inkwells came in many shapes and sizes and were made of glass, brass, silver, pewter, porcelain, or in this case, pottery.

Engelbrecht isn’t believed to have used this particular inkwell, but he could have. It was made sometime between the beginning of his term as mayor in 1865 and after his death in 1878. The artist who made it was John Calvin Mackley, who probably came to Thurmont from Middleburg, Md., around 1865. Thurmont’s red clay attracted many potters, and by 1867 Mackley was working for Anthony Weirs Bacher at the Jacob Lynn Pottery. Mackley specialized in brown-glazed ware that included unsigned utilitarian pieces, such as this ink-well, as well as signed ornamental pieces. Today, his pottery is regarded as some of the finest produced in the Shenandoah Valley.

Visitors to Heritage Frederick’s Museum of Frederick County can see some of Mackley’s works and purchase copies of Englebrecht’s diaries. The museum opens for the season on Jan. 16 and its hours are Wednesday to Saturday from 10 a.m. to 4 p.m. and Sunday from 1 p.m. to 4 p.m.