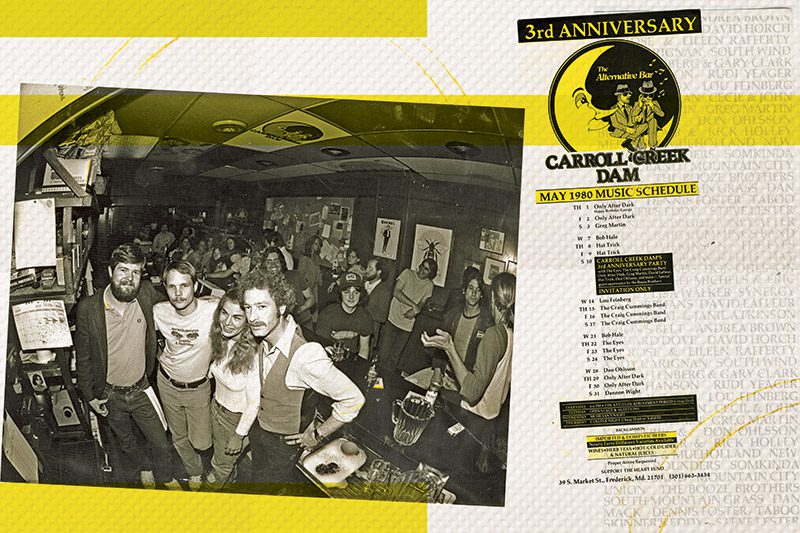 If you frequent Downtown Frederick, you have likely walked right past 39 S. Market St. many times and never gave it much notice. This otherwise-prominent address is cloaked in plain sight—a vacant, dilapidated building shrouded by the nearby packed bars and restaurants. But if you do stop and linger on its doorstep for just a moment, you can almost hear the laughter, feel the vibe and sway to the music that four decades ago made this narrow slip of space the most happening joint in town.

Between 1977 and 1981, the Carroll Creek Dam was packed with people day and night. Customers came from all walks of life and mingled as freely as they could in a cramped space that facilitated conversation and comradery. After dark, when the bands began to play, the windows rattled and floorboards creaked as the crowd kicked up its heels.

Here, construction workers rubbed elbows with accountants, bikers sat at the bar with lawyers, and college students sang and danced along with the musicians who squeezed their equipment onto a sliver of a stage. There is a temptation to describe the Carroll Creek Dam as a hole-in-the-wall. But it could be more accurately called a hallway, since patrons would stand toe to toe in the slender stretch between the long bar and the side wall, perching an elbow or resting a beer mug on a shelf that ran the length of the Dam.

Fred Humbert was 23 when he, along with original partner Jimmy Tolland, opened the Carroll Creek Dam. They had modest means and grand ideas. “I wanted a place that could showcase live music. My dream was to make Frederick the live music capital of the East Coast,” says Humbert today. The name of the bar reflected the spirit of the young entrepreneurs. The property had previously withstood floodwaters that spilled over the banks of Carroll Creek, so it became a literal and figurative respite from the storm for its owners and their customers.

All these years later, people say they remember the folks they met at the Dam—sometimes known as the CCD—and many have maintained lifelong friendships. “I don’t think you could re-create it if you tried,” says Ken Kerr, who will take a seat in the Maryland House of Delegates this month. Kerr is a teacher, musician and former Dam patron. “You set out to do one thing and it becomes so much more magnificent.”

Frederick resident Diane Hubshman recalls that it was Humbert himself who set the friendly tone of the bar. “Fred, to me, always seemed like a big brother. He had a kindness and a generous kind of attitude,” she says. “You would look for the flyers around town to see when your friends’ bands would be there. It was before Facebook. It was where you could find your friends.”

“The people could not have been nicer. I made a lot of friends there—still friends with them today,” says Jimmy Lee. The lifelong Frederick resident says he started going to the bar when he was a Frederick Community College student and was impressed that everyone he encountered there warmly welcomed him. “As a young person, you could talk to older people. A lot of bars are not like that.”

For Philip Wachter of Frederick, the Carroll Creek Dam became a place to exhale after a tough shift. He recalls working around the corner doing construction at the court house and stepping into the Carroll Creek Dam after quitting time in the late afternoon. “There were blue-collar guys, people I knew. It was the perfect place to go because it was within walking distance to the job. I used to smoke and eat Stewart Sandwiches there,” Wachter says, referring to a particular brand of prepackaged heat-and-eat food.

Heather Davis was manager at the Waxie Maxie record store at the Frederick Towne Mall. She would walk to the Dam from her Downtown apartment. “It would be packed every night and it had really good bands. Everyone got along. Cheap beer. That did the trick,” she says with a laugh.

Nobody recalls how or why so many factions of Frederick folk gathered at the Carroll Creek Dam. Diverse groups not only met, but mingled. “It was LGBTQ-friendly at a time when a lot of places were not,” says Kerr. He noted that customers of all races found a home there, too. “We all enjoyed the opportunity to get to know each other,” he says.

“It was the melting pot of Frederick,” says Scott Ambush, Frederick native and bass player for the jazz fusion band Spyro Gyra “It was the 1970s, coming out of the ’60s—the decade of love, civil rights, a changing society. We were open to coexisting. Everyone came in to have a good time. Back then, you didn’t expect people to not get along.”

Humbert says when he did encounter the rare troublemaker, he could count on his customers to back him up if he needed a hand showing someone to the door. And while he intentionally welcomed all, he did not let any one group take over. When the bikers came in, he asked them to refrain from wearing their colors and leather caps. “I wouldn’t let them control the business,” he says.

Lee Radcliffe, now broker/owner with Radcliffe Realty Group, was the bar’s manager. He remembers the Dam as the place that filled the gap between college and the start of his career. “I had known Fred since we were in junior high school. I got out of college and didn’t have a whole lot going on. Fred said, ‘Work at the Dam,’ so I did. It was a seriously different place and it became a lot of fun,” he says.

Vivian Campbell Combs was an 18-year old living in her first apartment, which happened to be on the second floor above the bar. “I felt safe in the Carroll Creek Dam. There was never any nonsense,” she says. While she spent many nights in the Dam, she also has fond memories of hanging out in the bar during the day, drinking coffee, reading newspapers and playing backgammon. “There was an intelligent, calm community,” she says.

But at night, when she was gearing up to hear The Eyes or one of her other favorite bands, she would push her couch aside just enough to peer through a hole in the floor where she had a good view of the Dam’s stage. If the drummer was just sitting down and the other band members were taking their places, it was time for her to descend the stairs.

Back then, the legal drinking age for beer and wine was 18 in Maryland and Humbert welcomed college students to his establishment. He knew that Hood College’s students enjoyed beer and live music at the Campus Club in the basement of Coblentz Hall, so he wisely started scouting out acts on campus and brought them to the Dam. The Hood College women followed.

Humbert says the students brought vitality and good ideas to the bar and was pleased that they had adopted his place as a hangout. One of them suggested that he remove the grubby tiles from the ceiling, give them a fresh coat of paint and reinstall them. “They helped the atmosphere,” he says.

He designated Thursdays as College Night. Students from Hood, Frederick Community College and nearby Mount St. Mary’s were eager to take advantage of discounted beer prices and other specials. After attending a party at Hood one night, Humbert was amused at how attached the students had become to his little bar. An industrious group of them had systematically pilfered beer mugs at each visit to the bar, unbeknownst to him. They stacked their stolen glassware and created a Carroll Creek Dam of their own in a dormitory. “There was an entire wall of beer mugs,” Humbert says.

In the evenings, the corner bar became a groundbreaking music venue. And, as Humbert and his musicians raised the decibel level in the establishment, they also raised the ire of some Downtown residents and business owners.

Humbert did a lot of talking and negotiating with the city, working with then-Mayor Ron Young to loosen zoning rules to accommodate live bands—not just acoustic acts and folk singers, but also rhythm and blues ensembles and rock bands. He spent days poring over city regulations and nights pleading before boards. His efforts paid off, noise restrictions were lifted and live music flourished. Grateful musicians and their fans flocked to the place.

“Fred is the godfather of Downtown music,” says Ambush. He was in high school when the bar opened and just 18 when he started playing there with Tabu, a fusion band that wrote and performed original music. “It was my foray into the real world,” he says. “It was a formative time. I was learning to play with other people.”

Bob Courter of Only After Dark says he and his band were delighted to perform at the Dam. “At the time we were playing [covers of] George Thorogood and the Rolling Stones, but a lot of bars wanted bands that did AC/DC and Lynyrd Skynyrd. We met Fred and he gave us a chance,” says Courter. The band soon became a bar favorite. On one packed evening lead guitarist Stan Tissue leapt atop the bar and did a duckwalk down it. “It was great. It was liberating,” says Courter.

Humbert’s own band The Booze Brothers also played to a packed house. He and bandmates Radcliffe and Kerr developed a devoted following. Rebranded The Original Booze Brothers, the old friends still play several gigs a year at arts festivals and other events, like Frederick’s [email protected] series.

Humbert closed the bar in 1981. “I closed because we kind of tapped out. Other bars opened up, with brass and glass and tin ceilings,” he says. He moved into bigger digs at 601 N. Market St. The new place was the City Room, a much larger venue with a stage, dance floor and dining area. His most loyal customers followed. He booked local and regional bands like Growing Up Different, Jonathan Edwards and Livingston Taylor. But he did not get the foot traffic he enjoyed on South Market Street. It seemed that people didn’t want to walk farther north than the Olde Towne Tavern on the 300 block of North Market Street, and those who drove had trouble finding adequate parking. The drinking age went up to 21, so he lost much of the college crowd. And it just was not the old Dam. Humbert closed the City Room after a brief, exciting run.

Those who frequented the quirky little bar have moved into the next phases of their lives. They have careers and kids and other responsibilities. A Facebook page tries to recapture the feeling of the Dam with old photos and wistful comments, but it is a poor electronic substitute, a weak link to past glory. Humbert still has a hand in the local bar, music and entertainment scene, managing Monkey Lala near Spring Ridge.

But what is the legacy of the Carroll Creek Dam? “Tonight, in Frederick there will be a band in every bar,” says Jimmy Lee, who attributes the musical choices available today to Fred Humbert’s vision at the Dam.

And what of Humbert’s dream of turning Frederick into a music capital? Some dreams don’t die or fade away. They just percolate for a while.