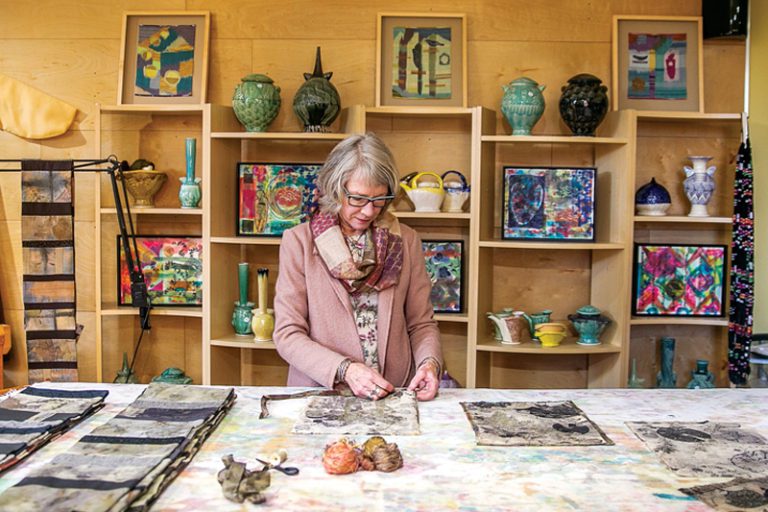 To visit the home of Margaret and Kevin Hluch is to visually tour the world at large. Woven baskets from Kenya share space with textiles embroidered by women in Guatemala. Then there’s the full-sized loom in what might otherwise be the dining area, and downstairs there’s a collection of Chinese rice molds, near the walk-in kiln, but more about those later.

The Hluch home on West All Saints Street also houses the studios of the husband-and-wife artists. “When we designed this house in 1999, we gave a great deal of thought to the space planning. We wanted it to be in sync with how we want to live our lives,” Kevin says. And it does just that. She’s a weaver and textile designer, which explains the placement of the loom; he’s a sculptor and ceramicist needing space to spread out in the basement. “The space is shaped by our lives.” he says.

They share much artistically, but they also have differences: Margaret’s work is two-dimensional, with her creativity being expressed in the designs she weaves into textiles on a loom, or others she creates by painting, piecing or weaving patterns, often using fabrics she’s gathered during her travels. Kevin’s is decidedly three-dimensional, working in clay to create pieces that are either decoratively sculptural or quite utilitarian. When speaking about art and its creation, she is more emotional; he’s more cerebral. He focuses on the genesis of his inspiration and the mechanics of how to express his art. She zeroes in on the observable, the sensory and tactile, and is more soulful in describing her inspiration and how it is expressed.

They are opposites in step with each other.

In addition to their passion for art, these two incredibly articulate and charming people are teachers at heart. Kevin was awarded a Fulbright-Hays grant to teach in Nairobi, Kenya, in 1985, “and we were committed to being there for a year while I was a visiting lecturer on art history and ceramics,” he says. “And I had never traveled before,” Margaret adds with a smile. They discovered then that travel was important to them—as teachers and artists—so they stayed for an additional year.

Their daughter, Kendra, was about a year old when they arrived, and their son, Mathew, was born there. Margaret became friends with the local women and was enthralled with the techniques they used in their basket weaving. “The baskets are woven so tightly they actually hold water,” she says. So, she offered workshops teaching them marketing skills, enabling them to earn money of their own—for some it was for the first time in their lives.

They agree that through teaching and the exchange of ideas, they are inspired by their pupils, and living among them generates an appreciation of cultures that inspired their own creativity.

Kenya clearly had a profound influence on them as artists and people. “Our purpose was to support the economy, so we focused on the needs they had,” Kevin says. “There was a simplicity of life—no TV, no phones and the potters had no real wheels on which to work. So, we made some out of butcher blocks and old Peugeot automobile parts.” They also used the native clay as their source of raw material and prospected for minerals for glazes. “Kenya is all about nature,” he adds.

They had no studio and because everything was so new it sparked creative thinking, not just artistically but in a practical sense, too. “The light was different, there were new foods. It’s a patriarchal society, but the women are its strength,” Margaret says. She met women who had an entrepreneurial spirit, so she established weaving workshops in the slums to create new designs.

“I taught them how to weave an ikat-type design in a zebra pattern. They planned to market it to help make money. Years later I saw it in the Sackler Gallery at the Smithsonian in Washington, D.C.,” she says.

Kevin says, “The Nairobi experience was inspiring. I felt most alive there and it gave me something to say. In my own small way I tried to establish the possibility of a pottery industry there.”

A trip to India also left its mark on their collective creativity. “The vibrant colors, the gorgeous silk fabrics—9 meters of it in a sari even if you were poor,” are the things that struck Margaret. “There is a sense of civilization, of a rich culture.” Unfortunately, potters have no social status in India, because the fine art culture in the West determines what is valuable, and making utilitarian things out of clay, rather than stone or metal, deems them not as valuable, say Kevin. But his sense of creativity was definitely influenced by the temple carvings. “Temples influenced more graphic wall hangings. They’re more organic—and erotic—than the Greek or Roman carvings,” he says.

A 2008-2009 trip to Japan left tangible marks on their home decor: the gorgeous silk dress hanging in Margaret’s studio (which doubles as a classroom on occasion) and the collection of dozens of rice molds in Kevin’s studio that he uses occasionally for embossing patterns on clay.

Jordan did, too, with its Middle Eastern iconography and architecture, its spices and food flavors. Kevin says, “Travel is a quasi-religious experience. The drumming and stars in Africa, the shamans and holy cows in India.” Adds Margaret, “And the Islamic call to prayer five times a day, and restrictions on everyone, in Jordan are all part of the heightened awareness of cultural differences that inspire.”

The ancient Mayan civilization of Central America is a recent contribution to their individual creative expression. Margaret is absolutely entranced with the colorful and intricate weavings of the women, and Kevin’s recent offerings echo the black-and-white motifs he found most stimulating.

Through all their travels and reflections on very disparate cultures, the inspiration for creativity is strong. “Colors, smells, the food—it’s all different and it all stimulates the senses.” Kevin says. For Margaret and Kevin Hluch, it stirs their creativity, too.