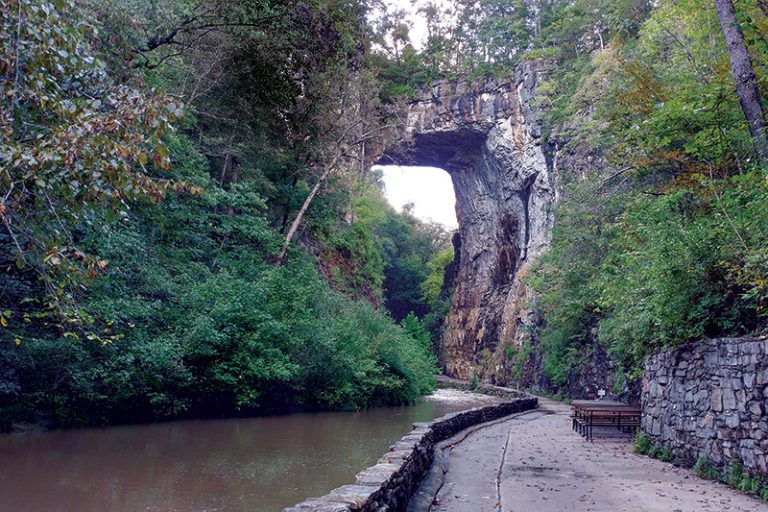 Interstate 81 can be a white-knuckle road to navigate. Tractor-trailers, some pulling double loads, barrel around you with what seems to be just inches between, or someone in a car swoops in and out  of traffic, driving like it’s the Autobahn. All that stress manages to disappear, however, when you look out on the beautiful southwest Virginia scenery, the open fields, grazing horses and especially the majestic mountains.

My brother and his wife were visiting from Oregon and we wanted a diversion from a week of cleaning out the closets and attic at our parents’ house. A two-day trip down I-81 was a perfect chance to stop and explore some of the sites I normally passed by on my way to someplace else. Natural Bridge was one of those places on my list.

Truthfully, I wasn’t holding out for much of a wow factor for a bridge of dirt and rock. At a gas station I asked the attendant if she had seen it and if it was worth a visit. “I saw it in elementary school when we went on a field trip,” she said. “And I definitely would like to go back.” All righty then.

While I-81 is fast-paced, the lesser highways in Virginia, like South Lee Highway—where Natural Bridge State Park is located—offer a bit of a reprieve, letting you experience things like the Pink Cadillac Diner, painted in a Pepto-Bismol-like shade, or roadside fiberglass gorillas and dinosaurs. Later in the trip we happened to stop at a scenic pull-off on Afton Mountain to view the valley at our feet when I spotted an historic marker. This was the spot where, on Sept. 21, 1933, pilot Richard C. du Pont was launched in his sailplane named the Albatross. After four hours and 50 minutes aloft, gliding through the Rockfish Gap, he landed in Frederick, setting a record for gliding 121.6 miles, doubling the previous record.

At Natural Bridge, history is also abundant and second only to viewing the geological formation that stands 215 feet high and has a 90-foot span. Too often, landmarks appear less majestic than what we have in our minds, but in this case, I was awed as I rounded the bend of the trail leading into the gorge. Pictures I had seen didn’t do justice to the towering example of nature’s handiwork. I stood and soaked in the view, the smell of the woods and the rushing sound of Cedar Creek, swollen from recent rains.

Visitors can either walk from park headquarters down more than 200 stone steps to the start of the trail or catch a ride in a van from park staff. The bridge is located a short distance down the trail, but it’s well worth hiking the approximately two-mile round trip to see other attractions.

The Monacans, a Native American tribe, considered the Natural Bridge a sacred site and the arrival of European settlers created a wider audience to appreciate the site. Like many things in Virginia, future U.S. presidents played a role in adding to the history of the place, starting with George Washington. As a young surveyor he was on the scene in 1750 and it’s widely accepted that he scaled 23 feet of the rock face to carve his initials. The “G.W.” is still visible. Another tale is that he stood on the creek bank and threw a rock over the top of the span. In 1927 it was reported that a large rock was found, also carved with his initials as well as a surveyor’s cross.

In 1774, Thomas Jefferson bought 157 acres, including the bridge, from England’s King George III for 20 shillings. Jefferson was taken with the area’s beauty and built a two-room cabin that he used as a retreat, often inviting others to share in the peaceful surroundings. Later, visitors from around the world learned of the bridge and made a point to visit during the 18th and 19th centuries, according to historians, creating the need for inns to accommodate the crowds. The bridge has been compared to Niagara Falls as a major natural wonder in North America.

The park includes a saltpeter cave where gunpowder and ammunition were made for the War of 1812. Farther up the trail is a replica of a Monacan village. Normally there are guides to explain what life was like here, but we arrived too late in the day. The gorge begs for a camera, and as if on cue, a heron swept along the creek for its closeup as we prepared to leave.

We drove through Lexington, Va., a town of spiffy little shops and historic buildings, but were more intent on finding a motel and dinner than exploring. Lexington will now have to go on my new list of places worth further examination.

My sister-in-law and I are suckers for schmaltz and my brother agreed to do our bidding by using the second day of our trip for a visit to Schuyler, Va., the boyhood home of writer Earl Hamner Jr., creator of The Waltons.

The TV show, which ran on CBS from 1971 to 1981 and is now syndicated, tells the story of the Depression-era family living in the foothills of the Blue Ridge Mountains. Hamner preceded the Waltons with a novel, Spencer’s Mountain, which was turned into a movie starring Henry Fonda and Maureen O’Hara. After The Waltons came Falcon Crest, a TV drama about a family in California’s wine country—a family considerably less wholesome than the Waltons.

Schuyler is a tiny town that lost most of its population during the Great Depression when its soapstone-cutting plant scaled back. Hamner’s father worked in the factory although on the TV show his character ran a lumber operation and had a farm. A few more differences exist between real life and television, said our guide at The Waltons Hamner House.

The Baldwin sisters who made “the recipe” moonshine were in truth mother and daughter. Grandpa and Grandma didn’t live with the family, but instead had a house up the street. And there were eight Hamner children, while the show combined the traits of two brothers into one character. Hamner’s mother used to say, “We could afford eight children, but CBS could only afford seven,” according to the guide.

The house is comparable to what’s seen on television and you can imagine the sound of that large family going about daily life within its walls. A large part of the TV series, as well as the Christmas movie The Homecoming, centers on John-Boy’s desire to be a writer. He’s routinely shown at his desk with a light burning as he jots down his thoughts in a thick tablet. The house has a light that shines non-stop over a desk as a tribute to Hamner who died two years ago.

Part of the beauty of these two tourist spots is that they’re open all year and each season in this part of Virginia has its own allure—so plan on going when you have a couple of days off. Although I would hesitate to recommend I-81 in a snowstorm.