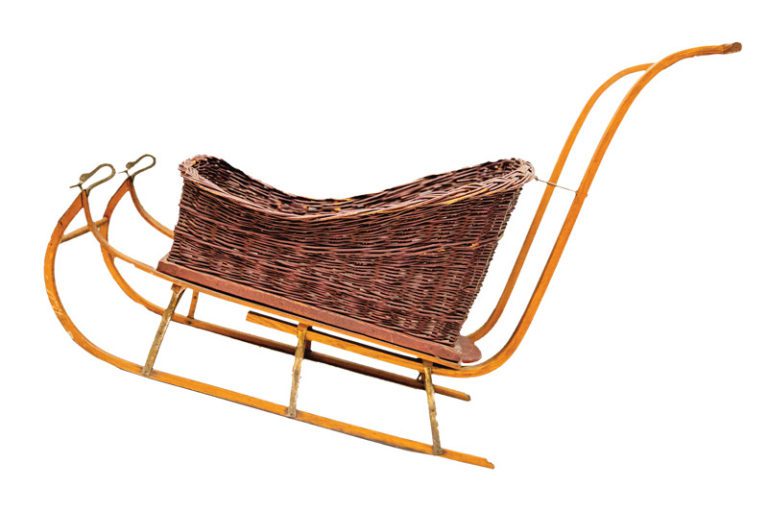 “Should [the snow] be tolerably deep,  it will be fine fun for Sleighers during the Christmas holidays.” So wrote Frederick City mayor, tailor and town observer Jacob Engelbrecht in his diary on Dec. 23, 1837. Englebrecht recorded the weather over many years and often observed during the winter months that snow was “fine for sleighing.”

Lifelong Frederick resident Helen Radcliffe Gregory remembers sledding with her brothers Lee and Andy in the late 1950s and early 1960s. One of their favorite places to sled was near the family home on Fairview Avenue. In those days, the street began at the top of a hill and veered right at Baker Park. She and her brothers would sled down the hill and continue through the park. In her words, “It was great!”

This toy wicker sleigh, however, probably never ventured outdoors. Made around 1900, it was very likely used as a prop to entertain children while they were having their photo taken. In 1899, Charles Byerly Sr. took over the Byerly Art and Photography Gallery, located on North Market Street, from his father, John Davis Byerly. He purchased the toy sleigh soon after. Portraiture was the focus of the family business, and in those days people had to sit for long periods to have their photos taken. Charles used props such as this sled to keep children occupied and not fidgeting in front of the lens.

Byerly descendant Henrietta “Sissy” Rothwell donated this wicker baby’s sleigh to Heritage Fred-erick’s Museum of Frederick County History in 1993. Visit the museum at 24 E. Church St. to see Heritage Frederick’s Festival of Trees through Dec. 8. The museum’s hours are Wednesdays to Saturdays from 10 a.m. to 4 p.m. and Sundays from 1 p.m. to 4 p.m.