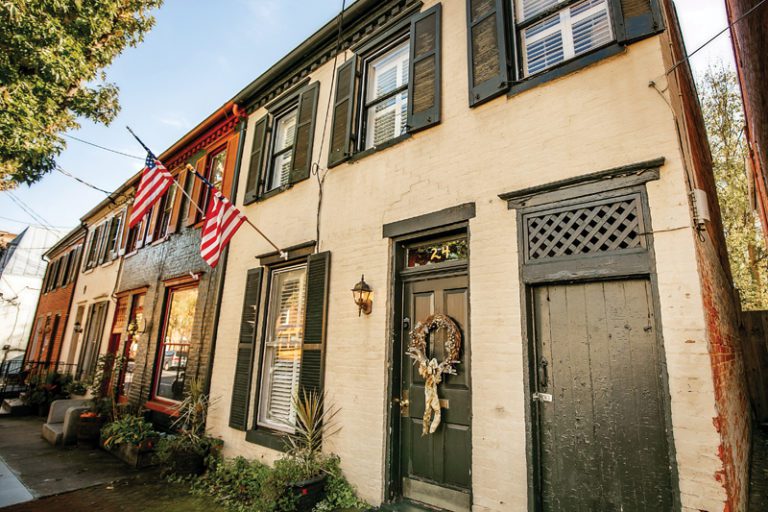 Opening the Door to a New Era of Downtown Rentals

“People have to be pampered. They want to feel as if they have had a memorable experience,” says Pfeiffer, who rents out part of her home on East 3rd Street to tourists and other visitors. “I make sure they know I have an interest in their experience in Frederick.” She gathers information from the Frederick Visitor Center and asks a lot of questions of her potential guests up front, sometimes investing up to two hours of email communications with them before they arrive. “I view myself as an extension of the tourism vehicle of Frederick.”

Pfeiffer lives on the third floor of her home and rents out the entire second floor—two bedrooms, one bathroom, and a large family room—through the rental website Airbnb. “The only thing we share is the staircase,” she says. She provides breakfast and as much information about the Frederick area as her guests want.

And she’s not alone.

A growing number of people are exploring Frederick as a getaway destination and availing themselves of the unique, cozy accommodations provided by a growing number of local Airbnb hosts. Visitors looking for a historic home or just a place to crash Downtown while attending a festival or family event can find a variety of properties to rent, and hosts are stepping up to provide an array of personalized services. Oh, and add in the not-so-small fact that Downtown still doesn’t have a hotel to accommodate visitors and, well, you have yourself a growth business.

Airbnb gets its name from company founders Brian Chesky and Joe Gebbia, who rented out rooms in their San Francisco apartment in 2007 during the International Design Conference. Hotels in the city were full and conference attendees were desperate for rooms, so the cash-strapped roommates offered air mattresses in their apartment. They called their budding business Air Bed and Breakfast. It eventually morphed into Airbnb, a multi-billion-dollar, web-based enterprise.

Booking an Airbnb is an easy online process. Guests simply go to www.airbnb.com (or use its smartphone app) and plug in information about the location and dates they are interested in visiting. Information such as photos, descriptions, pricing and availability are displayed. Reviews from past guests appear onscreen, too. Potential guests glean key pieces of information from these reviews such as the home’s location in proximity to area attractions, cleanliness, the hosts’ friendliness and professionalism and overall comfortability of the stay. Positive reviews act as free advertising for property owners; poor reviews can discourage would-be renters.

Once payment is made, the property owner sends a confirmation and opens an online dialogue with the guest, discussing check-in times and other pertinent information. Hosts set their own prices, which may include a security deposit and cleaning fee. Ideally, everyone’s needs are met—the guest, the property owner and Airbnb, which takes a fee.

Pfeiffer says the process is painless and she has had only positive interactions as an Airbnb host. “I have personal friendships [and] business friendships of people staying in my house. I’ve never had any reason to not trust people,” she says.

In the year since Aaron and Jen Marsh opened up their property at 21 E. All Saints St. for Airbnb users, they have had a steady stream of guests and zero complaints from guests or nearby property owners. “I wanted to be up front with my neighbors,” Aaron says about the use of his property. “I haven’t had any problems.”

The Marshes are among the Airbnb owners who do not live on the premises of their rental property. But they live and work locally and are vigilant about accommodating the needs of their guests. The house features three bedrooms, two full baths, hardwood floors, two staircases and a backyard that opens onto Carroll Creek Linear Park. It was built in 1860 and is becoming a favorite location for guests who are coming to Frederick and surrounding areas to visit Civil War sites.

“I’ve always had a passion for Downtown Frederick. I like offering my place to folks,” says Marsh, who has deep roots in the community. He works in the family-owned Marsh Realty and his grandfather used to live in a house across the street from his rental home. He and his wife say people are visiting Frederick to see a variety of attractions such as VOLT, McClintock Distilling Company and the Delaplaine Arts Center. Jen, who originally hails from the Baltimore suburbs, says people come to Frederick for “the shops, restaurants and the fact that it’s safe.” Others come to attend family gatherings and weddings and find the use of a full house to be practical and affordable, she says.

While some may come to Frederick to see historic sites, one Airbnb offers the unusual experience of staying overnight in a historic site. The newly renovated Barbara Fritchie House on West Patrick Street is available for rent. Bryan and Charlotte Chaney bought the house in January, renovated it and listed it on Airbnb by April. Since then they have had hundreds of overnight guests. “My occupancy rate is well over 50 percent,” says Bryan.

Fritchie, of course, was a Union loyalist during the Civil War, memorialized in a famous John Greenleaf Whittier poem and is one of Frederick’s favorite daughters. The house, a reproduction of Fritchie’s actual home, used to be a museum, but the Chaneys transformed it into a two-bedroom, one-bath rental unit with living room, dining room and a full kitchen. Guests can also stay in the adjacent Hauer House, also owned by the Chaneys, which is larger and can accommodate up to 11 guests. Both properties back up to the Carroll Creek Park.

Local residents seem to appreciate Fritchie’s home as much as visitors. The Chaneys say people in the community have thanked them for restoring the house. “It has touched people in a way that I was not prepared for,” says Charlotte. Bryan says someone deposited a little model of the Fritchie house on the doorstep of the building and he now has it on display inside. They say that offering the house as an Airbnb is personally rewarding and their guests show them a side to human nature that is uplifting. “There are some really good people in this world. They are respectful and thankful. They have increased my hope in humanity,” says Charlotte.

But what would Barbara Fritchies herself think? You might be able to ask her. The Barbara Fritchie House is listed on the Ghost Tours of Historic Frederick offered by Maryland Heritage Tours. The Chaneys don’t offer an authoritative opinion on the matter, but Bryan says just after completing the renovation, “I heard a funny noise in the fireplace.”

Contractor Anthony Owens, who worked on the restoration, adds, “I think there is a form of energy in all these old houses, don’t you?”

Airbnbs are customer-regulated, relying on word of mouth and customer reviews posted on the site. Some neighbors may not even know that the property next door is listed on Airbnb. While nuisance and noise laws apply to the properties, Airbnbs are not restricted by any local zoning laws.

Phil LeBlanc, owner of Hollerstown Hill, a bed and breakfast at 4 Clarke Place, has been in business for 16 years. After buying the single-family home, he stated his intention to turn it into an inn and filed all the necessary paperwork with the city. He says he went through proper channels and licensing procedures to adhere to city code as it pertains to bed-and-breakfast establishments. He believes that a disparity exists in the application of city codes, since there is no similar licensing and oversite of Airbnbs. While he now also lists his property as an Airbnb, he has asked the city to investigate the issue.

“Does placing an Airbnb into a neighborhood change the face of a neighborhood?” LeBlanc asks. He believes it does. He says it can create more of a demand on police and other public safety and services. “My gripe is — do the right thing by the community,” he says.

Other property owners say they believe they are doing a good job of reaching out to the community and being good neighbors, even without being mandated by local regulations. Some of them belong to loosely organized short-term rental managers’ alliances where they meet and share ideas and best practices. Others communicate directly with their neighbors. “Airbnbs hold people accountable for their actions. Both the guests and us,” says Charlotte Chaney.

Julia and Glen Ferguson live and work in shared spaces. As residents of Downtown Frederick, they opened up a suite in their Federal-style, historic East 2nd Street home as an Airbnb. They are also the owners of Cowork Frederick, a business that provides office and meeting space for people who don’t have their own offices. In both cases, they tap into the popularity and conveniences offered by the city.

“There is pent up demand to stay Downtown,” says Julia. Her Airbnb customers want to be near shops and restaurants and come from as close as Pennsylvania and as far away as Belgium. They are looking for a homey, more personal touch, she says. The Fergusons provide a basement suite with a private entrance with one queen bed and convertible window-seat bed.

In many ways, Airbnb is just an extension of their business. At Cowork Frederick on West Patrick Street they encourage freelancers, teleworkers, entrepreneurs and business travelers to “work for yourself, not by yourself.” They charge a membership fee and offer several different plans and services for those who work from home or are traveling and need an occasional office or meeting space.

Airbnb property owners in Frederick say that business is good. They believe they fill a void and don’t see traditional inns or hotels as competitors. They say they collaborate with each other and work with local businesses to promote tourism. Most say they would welcome a Downtown hotel and conference center. They believe Frederick will continue to grow, thrive and attract tourists.

“I think there is more than enough business to go around,” says Ellen Pfeiffer. “People come to Frederick to spend their money. They come, they stay and they spread their money all over town.”