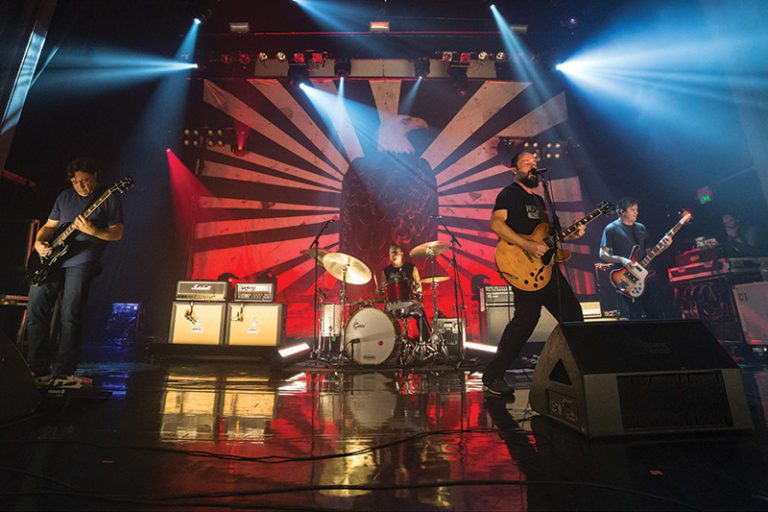 Dave Grohl wasn’t talking about the band Clutch, but the music icon/renaissance man might as well have been when he famously said in 2013, “Musicians should go to a yard sale and buy an old … drum set and get in their garage and just suck. And get their friends to come in and they’ll suck, too. And then they’ll … start playing and they’ll have the best time they’ve ever had in their lives …”

When talking with Clutch singer/guitarist Neil Fallon and drummer Jean-Paul Gaster about their quarter century of power-riffing their way across the world’s stages, it becomes clear that both of these guys simply and honestly pay tribute to their influences and are as matter-of-fact about the success they’ve found in the band as they are grateful for the best time they’ve ever had in their lives.

Clutch, a brash, baritone-heavy, bearded group of rock ’n’ roll boys, has been turning rubber on highways and burning eardrums in clubs for most of their lives. From Grohl-like, inauspicious beginnings in the garage to a number-one record (2015’s Psychic Warfare, which reached the top of Billboard’s  rock albums chart) and a new album out (Book of Bad Decisions), they’re proving the power of rock ’n’ roll as a lifestyle choice, and doing it with humility, grace, style, swagger and an awareness of the combination of luck and hard work that earned them their place.

Fallon, remarking on the band’s beginnings as songwriters says, “It’s all part of growing up. We start out young, typically, imitating [other musicians] to a fault, and it takes a while to discover what one’s own particular take is. It has to be done by trial and error, too, and sometimes there’s a lot more trial than error.”

Gaster remembers, with a wry tone in his voice, the early beginnings of the band: “We were in a very terrible hard-core band in high school, living in German-town. I can’t remember our first song, but lyrically it was pretty terrible and musically it was not groundbreaking in any way … but I do remember it had this spark to it that made me think that we could, together, make this thing that didn’t exist before then, and those were important times for us. … We’re better musicians now.”

The catchy quality to the songs, the ear-candy aspect, is easily explained when the band begins talking about their early influences also. Both Fallon and Gaster claim the D.C. Go-Go scene, as well as Bad Brains, the D.C. punk outfit, as powerful loves from an early age.

Gaster, in particular, cites Bad Brains as a clarifying experience. “I remember seeing the Bad Brains at the legendary 9:30 Club [in Washington] and thinking to myself, ‘That’s exactly what I want to do, and if we could get as good, then that’s as good as it gets,’ and I still think back to that moment, because that was when the bug really bit me, watching that band transform that place, in that club that, for me, is like a church. It’s a spiritual place.”

Fallon remembers Minor Threat as the first song the band ever covered, and points out that, despite the band’s early love for hard-core and punk music, “I think we all realized early on that we were beginning to burn out on the aggression of it, and, for me lyrically and emotionally, aggressive lyrics and power chords seemed a dead end. The classic rock stuff was embedded in our subconsciousness, though, and so when we started noodling around with riffs, that led to our self-titled record which put us on the trajectory we’re on now.”

An interesting question to put to songwriting bands is the “stage versus studio” question. Fallon has a take on that: “Music is meant to be played live. If you write a song and never play it for anyone, is it even a song? I lean toward performance because that’s what we’ve been doing for so long. We put out records to support tours, not the other way around…” In a burst of fairness, Fallon points out that he stole this last sentiment from the late Motorhead bassist Lemmy.

On the stage and in the studio, Clutch is a powerful, funky blend of heavy drums, basslines that mix blues and rock, and big vocals. Baritone voices in rock ’n’ roll went the way of the Seattle sound, disappearing up its own sludge in the early 2000s, but Clutch survived that particular purge and did so with the kind of unabashed swagger that real rock music fans reward. Clutch is a band with longevity, often playing to two and three generations of fans in the same audience.

“There are some nights when I look out into the audience and see fans with their kids and grandkids,” Gaster remarks, “and it feels great, and I feel lucky being able to entertain those fans.”

The members of Clutch are not young, skinny, immature rock stars. They’re grown men, with families and responsibilities, and men for whom Clutch and rock ’n’ roll are a passion and a career.

“You know, my son is now at an age where he is starting to understand that what his dad does for a living is not a typical gig.” Fallon says. “It sucks being away from home, but when I’m home, I get to be home 24/7. I don’t have to look for a job between tours, and thank God for it.” His gratitude is palpable: “I know that making a living in the arts is a pretty rare thing. Most of my musician friends have to play their music on weekends, and what they do to make a living isn’t their passion. So, getting to provide for my family doing something that I love is incredibly cool.”

As their new record hits, Fallon is still clearly in touch with his younger, yearning self. In response to a request for advice to younger musicians, hungry for success, he would tell young musicians to “forget social media.” In this, Fallon and Grohl clearly have common ground.

“Do shows. Bite the bullet and get in front of crowds. Be embarrassed, pay your dues that way because that’s real. Social media is not a stage. Also, the idea of ‘making it’ is weird. There’s no point where you think to yourself, ‘Now I’ve made it,” so just give that up. If you ever get to a place where you kick your feet up, then you need to quit.”

The band, on tour in support of the new record, plays Ram’s Head Live in Baltimore on Dec. 27. Members of D.C. faves Fugazi will be there to help celebrate the new release, and a sweaty good time with an earnest, honest, powerful rock ’n’ roll band full of local boys made good playing big guitars, singing big songs in big voices and having the best time they’ve ever had in their lives.