Catch of the Holiday 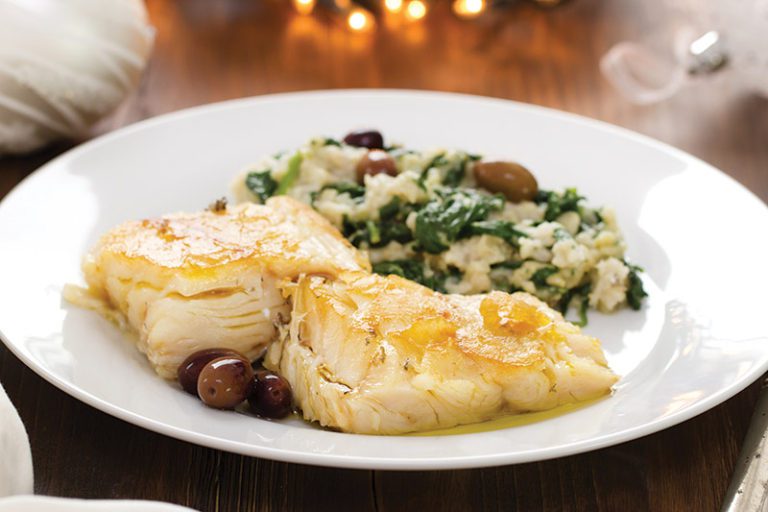 In Italy, especially southern Italy, nearly everyone abstains from meat on Christmas Eve—but in a fun, celebratory kind of way, because they feast on seafood instead. And we’re talking every kind of fish and shellfish imaginable, in a marathon meal to ring in the holiday. Think fried calamari, linguini in clam sauce, lobster bisque, octopus salad and baccalà (salted cod) with pasta.

This long-held tradition is believed to have origins in Catholicism (observant Catholics still abstain from meat on Fridays during Lent and instead eat fish), but over the years, it’s come to represent the broader Italian culture more than religious affiliation.

As Italians immigrated to the United States, this special seafood meal became somewhat Americanized and known as the Feast of the Seven Fishes (in Italy, no one was counting how many types of fish and shellfish were being piled onto plates, Pontecorvo says, for what would often be a multi-course meal that went on for hours). A couple generations back, most Italian-American families continued the tradition in a new country, gathering together for a day of feasting—followed by, let it be known, another day of feasting on Christmas Day, but the holiday allowed for eating meat.

As families have dispersed, as texts and Skyping have replaced being together “in real life,” and as people’s lives seem to get increasingly busier, restaurants in general have replaced those long hours people once spent in the kitchen laboring over meals, and generations-old traditions like the annual Feast of the Seven Fishes are part of that movement. Restaurants across the country offer the feast—or, more commonly, a condensed version of it—to customers each December.

Pontecorvo grew accustomed to having a nice, long Christmas Eve dinner with family, and he wanted to make that available to everyone. “I have to do it for me anyway—why not offer it to people?” he says.

In the fall of 2014, he opened Manalù Italian Restaurant (its name is a combination of the first letters of his first name, plus letters from the names of his daughter Naomi and wife Lucia) and planned a seven-course feast of Maryland seafood for those looking to celebrate the tradition. The idea was to feature one kind of seafood—items like octopus, clams, black mussels with white wine sauce, steamed-cod salad and a lobster bisque—for each dish. He offered it on the menu, but no one ordered it. “No one knew what it was. At restaurants, they want to eat and run away,” he says with a laugh.

But in the years since, as people have caught wind of what he’s doing, he’s seen the crowd grow each year, coming to Manalù specifically for the feast—although he has pared it down quite a bit to make it more manageable for everyone. More recently, he offers one to two appetizers, a main course, and dessert with white wine (it pairs well with seafood, he says) for the meal. The dinner typically ranges from $40 to $55 per person. He says people start asking him about it as early as October, wondering what seafood he’ll be preparing this year, as he changes the feast menu annually. Usually he doesn’t know until December, when he can see what’s available in Maryland.

After a long day of preparing this miniature feast for customers at his restaurant, it’s also Pontecorvo’s tradition to close the doors for the night, gather the remaining food, and cook the Feast of the Seven Fishes for his wife and daughter. Before heading home for the night, they share the meal and stay for as long as they’d like.

Cooper Nolasco, manager of Il Porto Restaurant on South Market Street, says he celebrates the Feast of the Seven Fishes with family and offers it to customers, when it’s requested.

Among home cooks, there are some exceptions to the “I’m too busy to cook seven fishes (during an already-busy time of year)” trend. Among those who still prepare the Feast of the Seven Fishes is Frederick’s Catania family.

Aimee Catania “married into the tradition,” as she puts it. Her husband Vince’s family is Italian-American and he grew up celebrating the Christmas Eve tradition each year. Even when Aimee and Vince first started dating, they would eat the meal with a family friend who prepared it each year. But then, that friend stopped hosting it, and they noticed fewer and fewer people keeping the tradition alive, to the point where she didn’t know anyone doing the Feast of Seven Fishes.

About five years ago, she decided to start hosting the meal herself, at her home. She and her husband have five children and wanted them to experience the tradition. Vince wanted the feast to be very traditional, not modernized, which meant all food would be fresh and prepared the day of (although his father provides the baccalà and sometimes makes it ahead of time and sends it, if he can’t make it out to Frederick from his home in Delaware). They cook each course, one at a time, so there are constantly people preparing food while others are dining. Some neighbors have been hesitant to try the salted cod and calamari, but others have come to love the authentic dishes, if seemingly eccentric at first. The Catanias stage it almost like an open house, inviting friends, family and neighbors to come and go as they please. People drop in when they’re able to, stay for a couple courses, then leave, so the house is bustling all day and late into the evening.

“We’re in the kitchen the whole time, and now our older kids help out and even our neighbors will help. My mom and mother-in-law are constantly doing the dishes,” Aimee says. “And we’re all eating food in the kitchen, as we’re making it.”

The first year, about 15 to 20 family members were there (“We had so many leftovers!” Catania says), but as it’s caught on, more neighbors pop in. Last year, she estimates about 75 people came through the house and sampled the feast at some point. “I love that we’re doing it and we’re giving that to our kids,” she says. “In those few years that we didn’t go, I really missed it.”