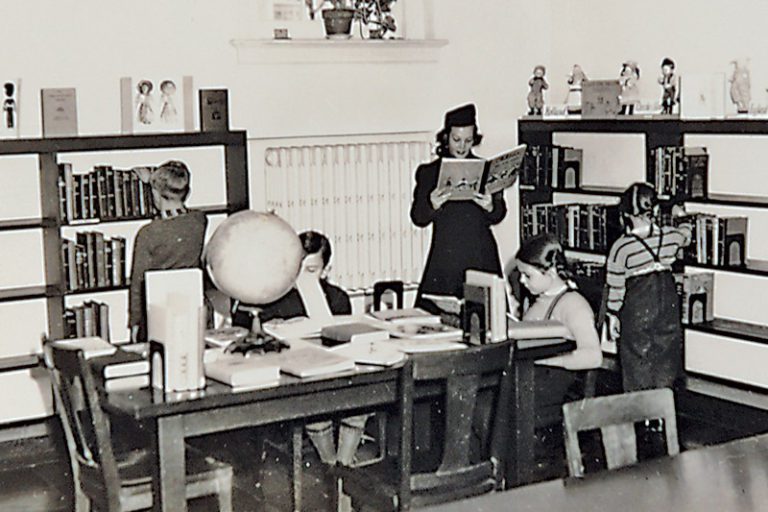 This is a picture of the original C. Burr Artz Public Library in 1937, just days after it opened to the public. The C. Burr Artz library was the first branch in the Frederick County Public Library system and was named for Christian Burr Artz, a successful land speculator and husband of Frederick local Margaret Catherine Thomas.

The couple owned 24 acres across the road from Rose Hill Manor as well as nearly 90,000 acres of land in Illinois, most of which was sold to the Galena and Chicago Union Railroad to lay track. In 1869, a local newspaper wrote that if Artz “lives a few years [more] he will become a millionaire.” Artz died in 1878, just shy of being a millionaire, and Margaret Artz died nine years later. The Artzes had only one child, Victorine Thomas Artz, who inherited her family’s considerable fortune at the age of 41. Most of the money, however, was held in trust as stipulated in Margaret Artz’s will; if Victorine Artz never married and had no children, the estate was to be used to establish a library in Frederick after her death. According to family lore, Victorine Artz had a suitor her father never approved of and ultimately chased away, leaving her heartbroken and estranged from her father. Victorine Artz died July 25, 1931, at the age of 85. Six years later, the C. Burr Artz Public Library opened on Record Street, with Josephine Etchison as the first librarian behind the circulation desk. Today, the Record Street building houses doctors’ offices, and the library long ago moved to its East Patrick Street building and expanded to branches throughout the county.  But despite the library’s growth, you can still see its roots.