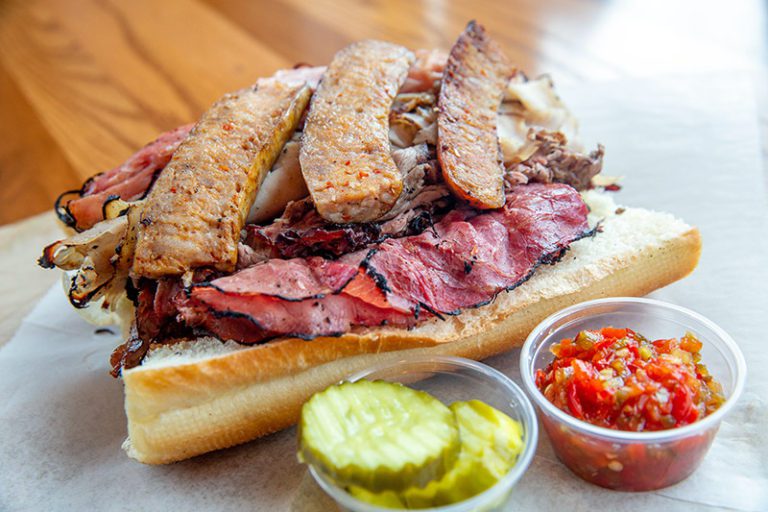 Roadside stands and festival tents emblazoned with signs for pit beef offer a Maryland delicacy that is gaining respect far beyond the state’s borders, thanks to popular food television shows. Pit beef is a flavorful haunch that’s minimally seasoned, high-temp fire-roasted and deli-sliced into pinkish-brown ribbons, then loaded onto a roll for eaters to dress as they please.

It’s atypical preparation and lack of sweet-saucy adornment—Tiger Sauce, a fiery mayo-horseradish blend, is its most common pairing—lead some to question its classification as “barbecue.” Whatever the category, pit beef ranks alongside judiciously seasoned jumbo lump crab cakes and the flamboyantly layered Smith Island cake as a regional classic that locals revere, while far-flung foodies make travel plans to get a taste of the most authentic version around.

Chaps Pit Beef, a Baltimore favorite with home-style appeal, is at the epicenter of the phenomenon. It wasn’t much more than a shack when it started in 1987 with a char-coal grill and a register; no phone, built-in electricity or dining room. Chaps wasn’t the only pit beef stand on their street nor was it the first, but its version quickly won the hearts and stomachs of locals whose patronage raised it to icon status.

Its reputation blossomed when HBO’s The Wire shot a scene there during its first season, expanding its notoriety and forever linking Chaps to the quintessential Balti-more experience. It became a food tourist’s pilgrimage, akin to New York City’s Junior’s New York cheesecake or Katz’s Delica-tessen’s corned beef, and the tasty Philly cheesesteak debate of Pat’s vs. Geno’s.

When Guy Fieri rolled into the city for the June 2008 “Flavor Town” edition of the Food Network’s Diners, Drive-Ins and Dives, he grabbed a big bite at Chaps. The owners, Bob and Donna Creager, expected things to get busy after that, but it actually opened a floodgate, spawning new devotees and subsequent food show spotlights. Anthony Bourdain visited with No Reservations and Adam Richman brought Man v. Food. Fieri himself visited two more times. And Andrew Zimmern featured Chaps on his Delicious Destinations in 2016.

Is it worth the hype? Decades of fan awards, with titles like “Baltimore’s Best” or “Carnivore Heaven,” seem to confirm a consensus.

Chaps humble food stand expanded with the crowds. Now it seats about 50 and has its own electricity. Nearly three decades in, the Creagers’ thoughts turned to franchising. They opened a prototype/training facility in Aberdeen in June 2016.

“The Creagers want business to flourish, so they take seriously the idea of growing new talent,” says Mark Ludes of MBB Management, brand representative for Chaps Pit Beef. He says the franchise program offers strong support that includes regular visits and strict quality standards. From a franchising standpoint, the company looks for locations with a certain population density, a strong middle-class and a family-oriented vibe. A fourth, separately operated, Chaps is opening in Rehoboth Beach, Del., by December. For operators, Ludes says, “They need to be in love with the brand.”

Chaps first officially chartered restaurant opened on June 5, 2018 in Frederick’s Westview South plaza along Buckeystown Pike, with Dunkin Donuts and Sola Salons as neighbors. It is owned by brothers/business part-ners Josh and Mac Verstandig. The native Marylanders researched various options before choosing Chaps Pit Beef. Josh, previously a sales and marketing professional, says the opportunity resonated with his inner foodie, “I am a BBQ aficionado, having been around the country to try BBQ. I have also been BBQing my whole life, known among my friends as having the best holiday cookouts and football tailgates.” He was a familiar Chaps’ diner, so the fit felt right.

The Frederick location is bright and airy with a good-sized patio and picnic-style tables inside, too. Plaques commemorate the newly minted chain’s brushes with fame. Other prints give a bit of Chaps’ history. They hang above bags of hardwood charcoal and boxes of Idaho potatoes for the cut-to-order fries. To date, the restaurant’s record is 1,100 pounds of spuds (all fried in 100 percent peanut oil) in a single day.

Angelita Ferguson greets customers with a bright smile. She takes her job as a host seriously, readily chatting about the menu. She discovered Chaps via TV well before the Frederick locale opened, admitting, “I traveled to Bal-timore to eat there and stayed for the weekend.”  She says lines are shorter and space is bigger here, but the place still gets hopping. Fans seem pleased. “People come in the door and usually scream and shout that they don’t have to drive to Baltimore anymore.”

Verstandig notes with pride that all the food is fresh. There is “no freezer in our store, no microwave either.”

The custom-built grill, or “pit,” weighs 2 tons and has 24 square feet of cook space. Each Iowa-raised, bottom round roast weighs between 10 and 15 pounds. They are trimmed and rubbed with a blend that includes paprika, thyme, onion powder and salt and pepper, then rested overnight. Doors open at 10:30 am. Since the beef is finished and sliced to order, diners can choose rare, medium or well-done.

On busy days the restaurant goes through 150 to 200 pounds of beef, but it isn’t the only thing on the menu. Sweet, smoky ham was an early addition. There is also roasted turkey and corned beef, as well as a Baltimore-made spicy Italian sausage, which can be piled on specialty sandwiches in a myriad of combinations; the sandwich’s girth grows accordingly. In true picnic style, there are hot dogs and hamburgers, mac-n-cheese, grilled chicken, potato and macaroni salad, and a wide variety of condiments. New items are being added.

“I used to get the turkey all the time. Then I got the sausage. Now I’m hooked on the wings,” says Angie Beachley, assistant general manager. At the time we visited, the restaurant had just added char-kissed pork ribs for $9.25 a pound, sauced or naked. Chaps also offers call–ahead ordering, catering and gift cards.

“We are still experimenting with specials/promotions, such as sliders, deep-fried pickles and other fun ideas,” Verstandig says. Some will be limited-time offerings. Other additions, like the ribs and wings, are here to stay. “We have a lot of first-time customers who come in thinking we are just another BBQ store and try to order brisket or pulled chicken.” He suggests chatting with the uber-friendly staff for the scoop on what’s new or how to appre-ciate the distinction between traditional barbecued beef and Baltimore’s version. His hint: “Everything from the cut of meat to the cooking style is differ-ent.” The pit sauce is thinner and less tomato-y than your average barbecue sauce, with a fruity note that blossoms into a tingling finish.

The Verstandigs will host an official grand opening at the end of this month with help from the Frederick Chamber of Commerce and are completing details on a “Chaps Football Tailgate” Sunday. Unlike the original location, Chaps Frederick is also adding local beer offerings in time for the holidays.

With early success, Verstandig says he would consider opening another location and there are plans to take the chain nationwide. Seems like, whether folks think of it as pit beef, roast beef or Baltimore barbecue, the word is out that anyone can eat like a TV star.