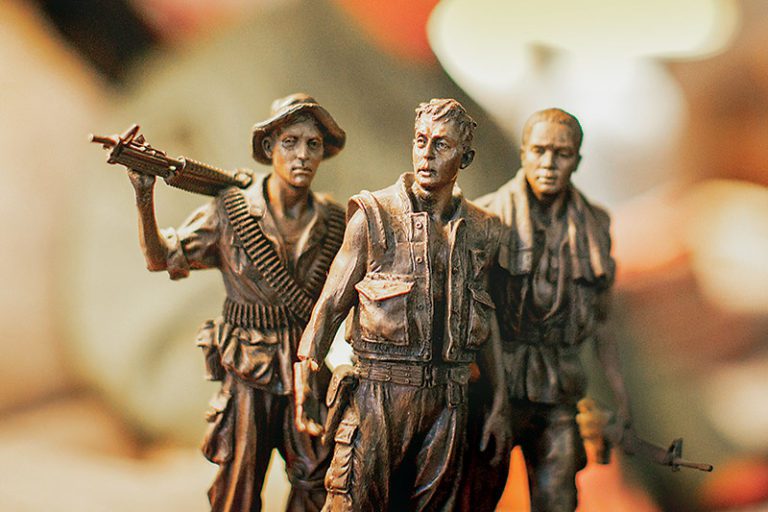 At age 95, Guy Whidden still has the self-assurance of a man who has made historic leaps. As a member of the Army’s 502nd Parachute Infantry Regiment, 101st Airborne Division, he parachuted into Normandy on D-Day, June 6, 1944. In September of the same year he jumped into Holland as part of operation Market Garden.

Fast forward to 1994. Whidden made his way back to France and jumped again on the 50th anniversary of D-Day. Now, he’s eyeing up a chance to jump next year on the 75th anniversary.  The sub-centenarian is not sure he will be cleared to jump, but he’s making plans to attend ceremonies and thinking positively. That attitude served him well during his military service and throughout his civilian career as a teacher, counselor and coach in Frederick County. “I’ve had a lot of divine intervention in life. Experiences that really conditioned me for anything,” he says.

His recollections of triumph, hope and close calls have been documented through video and a book, and now on a National Park Service virtual reality app that brings to life the war experience. Whidden became a participant in the project when he was approached by Mary Mannix, Maryland Room manager at the C. Burr Artz Public Library.

The National Park Service sought Mannix’s help in identifying local veterans to interview for a National Mall virtual reality series. Mannix saw the project as a great opportunity to integrate existing video, produced by the Veterans History Project, with collections of letters, photos, books and mementos on file at the library. “It was really a wonderful thing. Our whole goal is to document our communities,” says Mannix. She worked with staff from Close Up, a civic education organization that offers programming for young people. They partnered with TimeLooper, a company that creates virtual tours of historic places. The resulting work highlights the National World War II Memorial and the Vietnam Veterans Memorial in Washington, D.C., using realistic looking backgrounds and blending actors and voice-over talent with interviews with local veterans.

The app’s technology transports viewers from Allied victories in Europe to the simulated jungles and rice patties of Vietnam. Local Vietnam veteran Tom Nikirk remembers the real thing. His words, penned on the battlefield, are featured in the app. Nikirk’s father had his son’s handwritten letters transcribed to make them easier to read and those documents reside in the Maryland Room. Perhaps penmanship was not Nikirk’s top priority when he wrote these words in 1970:

“I’m going to tell you a story about April 2nd, and please don’t let it upset you because, be assured, I’m O.K. Perhaps it’s not the kind of story that a person should tell his folks back home, but it’s a story which I feel should not go untold to people in the world not only because it has had such an impact on me, but for the sake of men who lost their lives in the incident. It has to be one of the worst horrors that war has to offer, and I hope that when I get back to the world that no one says in front of me that the Vietnam conflict is not really a war, for I’m sure I would lose my temper.”

Nikirk then describes the explosion of leftover army artillery detonated by the Vietcong in the thick brush, killing 10 men and wounding many more. His letter describes the carnage, men laying on the ground with severed arms and legs. “Several of the men who I worked with so long laid dead on the ground almost beyond recognition. One of them was in 3 pieces,” he wrote.

He says that while he was not injured in the incident, two pieces of scrap metal had flown past his head while he was hunkered down in his hooch. Graphic details of the aftermath of the attack are included in the letter. Reflecting on the episode now, Nikirk says, “It’s important to tell it like it was.”

Both Whidden and Nikirk were prolific letter writers. Their families saved their letters and photos, and the men have shared them in presentations at schools, churches, veterans organizations and civic associations. Nikirk served as president of the Frederick County Vietnam Veterans Memorial Committee and Whidden is still technically a member of the National Guard Volunteer Branch—he never retired nor was formally discharged. But they served in different circumstances in different wars. Their experiences shaped them in very different ways.

Whidden came from a military family. His father was a World War I veteran, his brother served in the Pacific theater during World War II, and his sister was a member of the Navy League. After graduating from high school, Whidden joined the Army and made it to jump school in 1942. As a member of the 101st Airborne Division he made several successful jumps into enemy-held territory. He was injured by German machine gun fire in France. He says a bullet pierced the fleshy part of his neck and while it caused considerable bleeding, he didn’t seek medical attention for the wound. He literally soldiered on.

Later, in fighting near the town of Best and the city of Eindhoven in Holland, Whidden found himself pinned on the ground staring up at a German soldier who was aiming a pistol at his forehead. He says he watched in awe as the solider let him up and handed over the pistol. To this day, he doesn’t know why the German didn’t kill him. His only thought is that perhaps he looked too young to kill.

“I don’t remember having any fear in combat. I’m not making myself out to be a hero at all. I just always had a lot of faith and always thought that God was with me,” Whidden says.

He suffered a debilitating leg wound as the result of a mortar attack near Best. Three of his friends were killed in the attack. He recovered and was taken out of combat, eventually becoming a jump instructor at Fort Benning, Ga.

But not all of Whidden’s “war stories” are about his days in the Army. Sitting at his house on a recent sunny day, he gleefully tells how he overcame schoolyard bullying in his early boyhood. “I became a wrestler and a boxer and nobody ever messed with me again,” he says.

His book Between the Lines and Beyond is a collection of letters, photos and musings from his time in the Army. Some of stories reveal Whidden’s sense of humor and go beyond the wartime valor. For example, he tells how he narrowly missed being skewered by a MP’s bayonet when he was hiding in a pile of dirty laundry, sneaking a ride back to base in a military laundry truck. He was found out and cited by his commander for being habitually late. No big deal for a man who had stared down death.

Thomas C. Nikirk was drafted into the Army after earning a degree in history at the University of Maryland in 1968, just as he was beginning his studies at the University of Baltimore School of Law. He says a lot of his peers had already been drafted and he was not surprised when he received his letter. He was assigned to the infantry and entered non-commissioned officer training school, serving as a staff sergeant in the 11th Battalion, 23rd Infantry Division. But once he was in the jungle, he quickly concluded that formal training was only going to take him so far. “No matter how good of a soldier you are, you are not invincible.”

He encountered danger from many sources during his time in the mountains and jungles. As a point man on patrol one day in the deep brush, a king cobra revealed itself, rising up to greet him at eye level. Its hiss froze him in his tracks until he regained his composure and shot it. He also encountered a leopard that crept toward him in the middle of the night.

He shot it and took a swatch of its skin that he has kept all these years.

For a time, he was not sure he would make it out of the jungle, especially when he contracted typhus. He endured high fevers, was placed in a bed of ice and assigned to a hospital ward with others who had fevers of unknown origins. The only bright spot during the illness was the opportunity to eventually sleep in a proper bed with clean sheets and to be fed hot meals.

After returning to the combat zone, Nikirk says that it became increasingly evident to him that the war had “turned into a big fiasco.” The aftermath of the Vietcong’s Tet Offensive turned waning public support for the war to vocal opposition. “All we were fighting for started to fizzle,” he says.

In 1970, Nikirk came home to Frederick, but not without some unforeseen difficulties. At the airport, he and a busload of returning uniformed soldiers encountered war protesters. “Standing at the ticket counter, I saw spit running down my pants leg,” he says.

He arrived home with a two-week supply of malaria tablets, which he took, but still contracted the disease. He landed in Frederick Memorial Hospital with a fever of 106 degrees and was sent to the Veterans Adminstration hospital in Baltimore where he stayed for several months.

Whidden and Nikirk made names and careers for themselves in Frederick after the wars. Whidden became a teacher and an award-winning coach who established the wrestling program at Gov. Thomas Johnson High School. He was also a champion swimmer and an avid runner.  Nikirk taught history at St. John’s at Prospect Hall for a time. He went back to law school, graduated, passed the bar on his first try and joined the family law firm.

As Veterans Day 2018 approaches, both men reflect on their time in battle. Both hold their military service close to their hearts, and applaud the library’s efforts to collect, record, and disseminate information through the written word and through the virtual reality app. But they express their sentiments differently. Asked how Vietnam will be remembered, Nikirk says, “It’s something people want to shut the books on. The danger is … history repeats itself.”

Whidden offers his take on the future, “Anything can happen in the next 10 years. It’s you, young people, who will end all wars.”

Find more out about Guy Whidden and Tom Nikirk at the Maryland Room of the C. Burr Artz Library, Frederick County Public Libraries. Also, download the TimeLooper app, click on Washington, D.C., and National Mall to find the virtual reality tours of the World War II and Vietnam memorials.