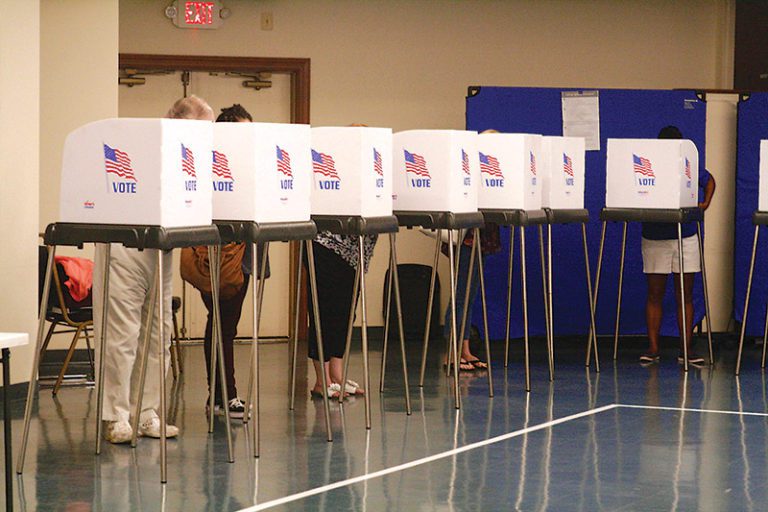 For Betty Mayfield, the work of the Frederick County League of Women Voters might have been best illustrated eight years ago, when she sat at a table at Dutch’s Daughter listening to a presentation at the organization’s 50th anniversary celebration that talked about its many accomplishments over the years in areas like voting access, open government and civil rights.

“I was absolutely blown away by the stories I heard,” says Mayfield, today co-president of the organization. “This group of fearless, plucky, smart, dedicated women has done so much for our community—from convincing the County Commissioners that we needed recycling, to supporting rape victims, to standing up for community college faculty in a time of crisis.”

The national League of Women Voters was established in 1920 immediately after women were given the right to vote with the passage of the 19th Amendment. Its first mission was to educate women on how to vote but has since grown into many other areas. The League’s principles are based on the belief in representative government, individual liberties established by the Constitution and a balance of powers between the branches of government.

For almost one hundred years the League has defined and promoted the public interest from a strictly nonpartisan position. It has weighed in on issues of national importance from civil rights to campaign finance reform, and equal opportunity in education, employment and housing.

In Frederick, it started with a woman named Ruth Hallo Landman. Born in Germany in 1927, Ruth and her siblings fled their home in 1939 in the wake of anti-Jewish riots targeting synagogues and businesses. She was 13 when she arrived in the United States.

An excellent student, she graduated Phi Beta Kappa from Vassar College at age 20, studying anthropology under Ruth Benedict and Margaret Mead. She married another refugee from Germany, Otto Landman, in 1948, and joined him at Yale for graduate study. Landman earned a master’s degree and doctorate in anthropology while her husband earned graduate degrees in chemistry and microbiology. The family moved to Frederick when Otto accepted employment at Fort Detrick as a geneticist.

While living in Frederick, Landman, then a mother of three, helped to found Frederick’s chapter of the League of Women Voters. She served as the chapter’s first provisional president from 1959-1960. She was a “Fort Detrick wife,” one of many women who moved to Frederick County because of their husbands’ work at the Army base. Many of the wives were young mothers and participated in civic organizations to improve the education of their children.

Frederick’s League was formally founded on March 31, 1960. Fort Detrick was not the only source of the local League’s support. Early Frederick League members found an ally in Hood College where some of its members worked as faculty or staff. Many of the chapter’s meetings were held on campus beginning with its first formal meeting on April 3, 1959.

Men became members in 1974 and Lord Nickens, the noted civil rights leader in Frederick, was the first African-American to join the League. Today, Frederick’s League has approximately 200 members.

The League has developed a method of determining what is in the public’s interest. It involves deeply researching a topic, listening to experts, debating the pros and cons of the issue, and, finally, meeting to achieve a consensus. Once agreement is reached, the League publishes a report and holds public forums to issue its findings. The process is long and it models a form of deliberative democracy that educates members and the larger community through open debate and free expression of dissenting views.

One of its earliest initiatives focused on improving voter services, such as lobbying the county to offer locations beyond Downtown Frederick to register to vote. The League continues to emphasize the importance of voting by registering voters at high schools and colleges publishing a voters’ guide for every election.

In 1973, Frederick Community College’s faculty and the county Board of Education were deadlocked in contract negotiations. The faculty declared a work stoppage and were fired. The League, under the presidency of Kay Bresee, hosted public forums to inform the public, and reached out to the faculty and members of the board. At that time, the Board of Education oversaw the entire public system of education, including the community college. The League conducted a study and determined that Frederick Community College should have its own board of trustees. Its recommendation was accepted.

Victims of sexual assault have access to health care in Frederick in part because of the leadership role the League played in pressuring Frederick Memorial Hospital to change its policies. In 1977, a rape victim had gone to the hospital for treatment but had been denied an examination to gather legal evidence. Instead, she was taken to Washington County.

The denial of care led to months of public opposition with many groups protesting hospital policy. At the forefront of the protest was the Frederick County League of Women Voters, which lobbied the hospital’s board and published materials in the local newspaper. The hospital changed its policy and began to provide the specialized training that was required.

Recently, the League focused on issues such as the privatization of Citizens Care and Rehabilitation Center and Montevue Assisted Living, changes by county government in land use development policies, immigration and ethics in government.

For decades the Frederick League has monitored public officials for unethical behavior, promoted greater transparency and decried the weak supervision of ethics in politics. It pushed for a stronger code of ethics for public officials.

The League recommended the formation of a nonpartisan Ethics Commission whose members would periodically evaluate the adequacy of the ethics law and distribute information to employees and officials.

The Frederick League continues in the tradition established by Ruth Landman, a child refugee who came to the United States to save her life and who, while in Frederick, helped to establish an organization that has promoted democratic values for almost six decades.

“As we head into our second fifty years, we are focused on diversity, inclusiveness and equity, including in our membership.

We welcome members of all genders, races and ethnic groups, political parties, and geographic areas of the county. We hope to recruit more student members and young people, to keep our League alive and active and growing,” Mayfield says.

“Going forward, we will continue to monitor the conditions that matter to the residents of the county, continuing with ethics reform, monitoring charter government and keeping a strong eye on effective and rightsized growth,” says current co-president Sarah Matthews. “Above all, we look for ways to not only encourage residents to register to vote … but finding ways to encourage civil discourse and encouraging people to vote.”

Hoda Zaki is a professor of political science at Hood College. Research was provided by students Brielle Rozmus and Nailah Russell.