Hounds On The Hunt 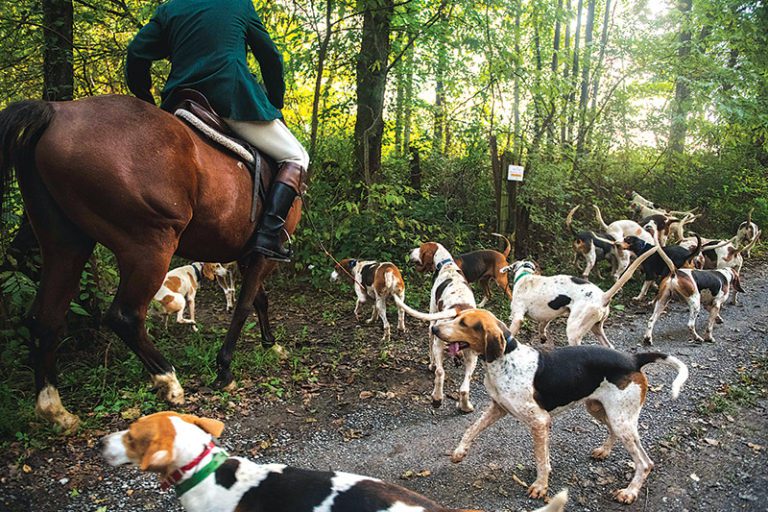 No animals were harmed in the making of this story. I promise. It starts on a farm nestled up against the Monocacy River near Adamstown. It’s a sunny morning with large puffs of mist dotting the horizon just above the trees. I’m on horseback and about to take place in my first fox hunt.

The relatively flat terrain and the mix of fields brimming with crops and woods appealed to my rookie hunting skills. There would be a mix of horse trotting, which is like a slow jog, and cantering, which is like a rhythmic, controlled run, along with a few logs to jump.

Fall in Maryland means apples, leaves turning and relief from the hot, humid summer. For many equestrians, fall also brings the revival of one of Maryland’s oldest traditions: fox hunting, or more accurately, fox chasing. New Market-Middletown Valley Hounds, which has organized local fox hunts for decades, is still going strong. Most Sundays and Thursday mornings from September to March, weather permitting, riders converge on farmland with horses primed and hounds ready to run.

I was fortunate enough to be invited along on one of these hunts. This morning would be an extended ride, with a few sudden stops and starts thrown in. Trail riding is one of my favorite parts of horseback riding, so what’s not to like?

Fox hunting originated in England, where the goal truly was to eliminate foxes from the landscape. Farmers wanted the foxes gone, so equestrians chased foxes with hounds bred specifically for the task. The hunts usually ended in death for the foxes. That’s not the way it works in American fox hunting, however, especially in the 21st century.

American foxhounds are bred to chase the scent of a fox. Sometimes the riders will see a fox, but most foxes outwit the hounds by running into a hole or up a tree. Red foxes were brought to America from England in Colonial times, although these clever creatures adapted to their new terrain and bred with native gray foxes. For the hounds, the hunt is the thrill of chasing a scent that gives them a feeling of job well done. When hounds lock onto a scent, they announce it far and wide with their howls.

The hunt begins with the release of the hounds. Horses and riders face several dozen excited dogs as they run out of crates arranged inside a horse trailer. The local club’s hounds live in a kennel in Middletown, where they are trained and cared for. A huntsman lives with and trains the hounds. Hounds that don’t make it to fox hunting are usually adopted as house dogs by one of the equestrian members.

There are several staff people who help run the hunt, for a small salary. Whippers-in, wearing red blazers, prevent the hounds from running off-course and onto dangerous road crossings. At the beginning of a hunt, the master of foxhounds, also wearing a red blazer, welcomes the riders and decides on the path they must follow. The master, assisted by field masters, also ensures riders don’t damage farm crops and get in the way of the hounds.

The huntsman sounds a horn, the hounds are off, chasing the scent. The huntsman keeps up with the hounds. It’s his job, with the help of the whippers-in, to keep the dogs on course. Riders, dressed neatly according to hunt rules, follow the master of foxhounds. Rules are governed by the Masters of Foxhounds Association of America.

Once a scent is discovered, the chase ensues and the riding gets fast and furious. Sometimes the riders see a fox, but usually not. If a rider spots a fox, she then shouts, “Tally-ho!” and points her horse in the direction of the fox. The chase begins anew, until the fox is again lost. The huntsman blows a few notes on the horn to signal this. If the fox disappears, or the scent goes cold, the chase typically ends. The fox usually returns to his den, ready to lead the hounds on another day.

Fox hunting in America began in Maryland in 1650, and Maryland remains one of the largest fox hunting strongholds in the nation. George Washington was known as an ardent follower of the hounds and may have even hunted on farmland now used by New Market-Middletown Valley Hounds.

Our hunt starts slowly, giving me time to warm up my riding muscles. After a few minutes of walking around a field brimming with soybean plants, we begin trotting to catch up to the leaders. Huntsman Alasdair, or Ally Storer, is well ahead of us, having signaled two dozen excited hounds to set off on the chase. Our group follows Grace Pariso, one of the club’s two masters of foxhounds, who keeps us a respectable distance from Storer and the dogs to allow them to do their work. Kate Byron, the other master of foxhounds, leads a group of riders of inexperienced horses on a more sedate chase. Horses, like riders, must learn the ropes of fox hunting.

It’s a delicate balancing act for the ride leaders to keep horses and riders close to the hounds, but not too close. Pariso keeps Ally within sight or sound as we follow the pack of hounds. We ride through a forest thick with sycamores, river birches and maples. We dash alongside another soybean field, this one chock full of overhanging branches, many draped with gauzy tent butterfly nests. We watch as the hounds bounded along ahead of us, noses to the ground, following the scent. Sometimes a stray hound gets left behind, then would be seen leaping among the soybeans, racing to catch the pack.

After riding through more fields, we plunge into another forested trail, this time hopping over several downed logs. I am good with all of this, until we come upon a particularly gnarled, old downed tree stump. This one looms large until I realize that off to one side is a more manageable-sized piece of the stump. My horse, Nipper, an Appendix Quarter Horse and a seasoned trail-and-hunt horse, also spots the easier obstacle and, together, we jump.

A little later, we almost lose our group, but a quick dash up a hill reveals the other riders, and we canter toward them, relieved. In fox hunting, as my riding instructor Alyson Springer explains, an ironclad rule is you keep up with your group. Thanks to Nipper’s quick response, we are back on track, and back in the good graces of the hunt’s master.

In between dashes through fields and forests, the riders pass flasks of fortified coffee and straight whiskey. We have a chance to watch the field birds as they gather their morning breakfast. Springer’s horse, Bebop, happily nibbles at some grass along the edge of a trail.

The pace alternates between fast and slow. We’d canter a bit, then stop, then take off at the trot and break into another canter. It is exhilarating. When the horn sounds to end the hunt, I wonder when my next fox hunt would be.

The club hunts through fall and winter. Some rides are short, like our 90-minute trek, while others last three hours or more. But for nearly everyone—riders, horses, hounds and maybe even the fox—it’s a fun day to be outdoors and connect with history.

The New Market Hounds began in 1963. The Middletown Valley Hunt Club started in 1966. The two clubs merged in 1981 as housing developments began to replace farmland in Frederick County, and the number of horses and riders diminished. Today, the club promotes farmland conservation, not just for equine pursuits, but to preserve farming, rural views and a way of life that’s fast disappearing.

The New Market club once hunted around Holly Hills, now the site of a golf and country club, and Lake Linganore, now a large housing development. In the 1970s, Middletown farmers were able to hunt on about 3,000 acres of farmland. Many farmers would allow clubs to hunt their land, as long as they didn’t damage the crops or fields, a practice clubs still follow today.

The club hunts on a series of local farms, which are known in hunt lingo as fixtures. Our ride has about 15 horses and riders, but the rides can attract as many as 50 participants. Large rides will split into three groups. First flight is the group that gallops behind the hunt master, jumping chicken coops built over old barbed wire fences. Second flight riders will trot and canter as well, but there are fewer jumps. Third flight, or hilltoppers, is for those who prefer to ride at a relaxed pace.

Not everyone who belongs to the club is a wealthy horse owner. Some riders own a single horse, while others ride horses they lease. Some are connected through lesson programs. Others are young riders who come up through the club’s active junior program. The club has many paths to membership for those who love to ride or are in lesson programs. I was lucky enough to ride Nipper, a lesson horse at Whitings Neck Equestrian Center near Shepherdstown, W.Va.

The club’s hounds are American crossbreds and Penn-Marydel, which were bred specifically for the Mid-Atlantic’s rolling terrain.

After the hunt, riders traditionally have a “break the fast” nibble. Sometimes, it’s just some fruit, cheese and crackers as riders pack up to get to work; other times, it’s more of a pot luck meal. After cooling off our horses and parking them in their vans under shade with bags of hay, we munch on some cheese and deviled eggs. Ally Storer quickly loads up the dogs to get them home.

“Land preservation is huge for all of us,” says Kate Byron, a niece of the late U.S. Rep. Goodloe Byron. With Frederick County not having the wealth of Middleburg, Va., or even Montgomery County, putting farmland into various preservation programs helps with land conservation and open spaces, while focusing development on urbanized areas.

Kate’s parents were members of the New Market Hounds. “I was fox hunting in the womb,” she says. She and her siblings grew up fox hunting. “I took a hiatus, then threw myself back into it, and dragged Grace with me,” she says.

Grace Pariso, who lives on a small farm near Frederick, has been fox hunting for 32 years. As a girl, she exercised racehorses for a trainer in Brookeville. The trainer was also a huntsman for two clubs. In 2001, she moved to Frederick and joined New Market-Middletown Valley Hounds. “I love this,” she says. “I’ve been riding most of my life. I’ve evented, raced, shown dressage, but through it all, I’ve always fox hunted. There’s something about being in the open and riding. How lucky we are, to do this.”

Niqui Johnson, owner of the Urbana Riding Club, started fox hunting about five years ago. “I had a taste of it here and there,” she says. “I like the camaraderie of this group. This is the best group of people. It’s a great reason to be out in the morning, in the countryside, watching wildlife.”

She also likes the reactions from the horses. “They enjoy this more than anything,” she says. “It makes sense to them. They travel in a herd, they start, they stop, which is what they do naturally. They listen when the hounds start.”

More information about New Market-Middletown Valley Hounds can be found at www.nm-mvh.com.