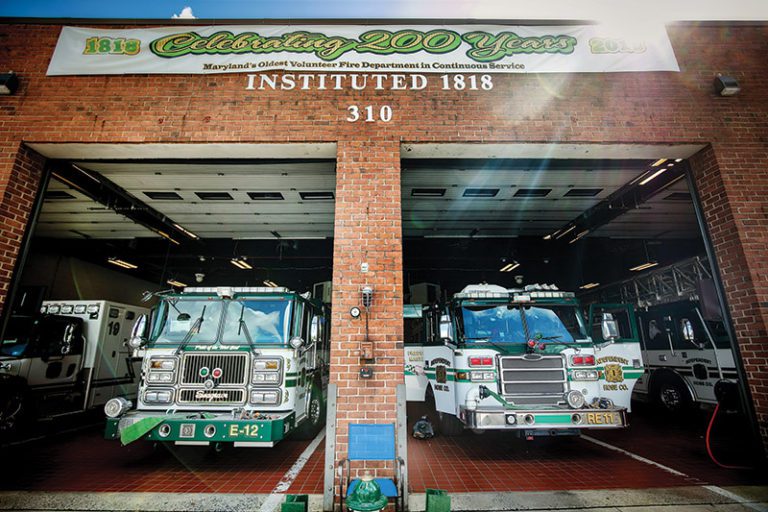 After graduating from Frederick High School, Clarence Rinehart was working at Price Electric when a co-worker asked if he wanted to join him as a volunteer at Independent Hose Company. Rinehart had no firefighting background, but after visiting the station he decided to join. The year was 1956, and the company, then located on West Church Street, was running about 100 calls a year and volunteers could ride a fire truck on their first day.

Today, 62 years later, Rinehart is still a member but much has changed. The company, located on Baughmans Lane after moving in 1978, is the busiest in the county, handling an average of 8,000 calls a year that include fires, emergency medical services, vehicle crashes and alarms. Volunteers, along with career personnel, must also complete formal training before stepping on a vehicle.

Rinehart continues to volunteer at Independent and was named its historian last year. He’s in the process of updating the company’s history since it was last completed in 1994. “I just enjoy being around the people around here, the service and all we do,” he says, sitting in the company office. “All together, I just enjoy it.”

The company, which is the oldest continuously running in Maryland, has been busy this year celebrating its 200th anniversary, including hosting an open house, a muster show-casing hand-drawn and motorized hose reel units along Carroll Creek and a special fundraiser. (The company also sells Christmas trees and rents its banquet hall for bingo to raise money to pay for equipment.)

“I think it is a proud distinction knowing the company is almost as old as the country,” says Chief Brian Grossnickle who has held every operational rank in the company during his 30 years of volunteer service. “It’s a privilege to serve with a lot of people that have come before and people that are still here. … The company has always had good firefighters come through, good people—people that are dedicated to the profession and to volunteering for the community and the company.”

The beginnings of the company in 1818 are largely unknown. The city was divided into four quadrants with different fire companies responsible for each area. It’s believed Frederick Hose Company, which maintained the Third Ward, later reorganized into the Independent Hose Company. All white, taxable citizens were required in 1817 to join a company in their quadrants, with fires being announced through public outcry. Citizens would carry water in buckets, dumping them into a pump engine as others pumped the water onto the fire.

The company built a station on Court House Square in the summer of 1827 for $550. In 1845, the company bought a lot for $750 on West Church Street with groundbreaking on the two-story structure taking place the following year.

In 1849, a fire bell was purchased to alert firemen to a call. It was later tolled after a member died. Just recently, the bell was reinstalled in front of the current station after being kept in storage for a decade after a car plowed into the structure where it had been located.

A fire report in 1893 showed the company had 35 alarms with 20 being false and 15 as actual fires. In 1927, the company’s membership was around 1,200 and it wasn’t unusual to add around 200 new members at a meeting or have more than 400 vote during board elections. Similar to today, company members and equipment would often participate in parades and events, even traveling by train, to tell others about the company and its work.

In 1995 the company decided to rebuild the engine house, adding a third floor, with a mortgage of $4,500. By 1940, the station was remodeled again, with the third floor removed and the front reconfigured to have a large bay door. The flat roof was replaced in favor of a sloping one and hallways used to dry hoses were removed.

The engine house received its final company upgrade in 1959 when a two-story addition was added in the rear, including a reading and game room, a small kitchen, a driver’s bunk room and television room for $50,000. By the mid-1970s, the company had outgrown the space and moved to the current home, answering calls on the west side of the city.

One of the largest fires the company has covered was at the Frederick Seventh-day Adventist Church, which in 1993 was located adjacent to Harry Grove Stadium. The five-alarm fire burned out of control for two hours, even with 100 firefighters on the scene. Damage was estimated at $3 million. The church was empty when the fire was noticed by a caretaker. Nine first-responders were treated for various ailments including smoke inhalation, minor burns and exhaustion.

Another large fire that Independent Hose responded to was at the Antietam Village Center off Opposumtown Pike, now home to a Walgreens. The Office of the State Fire Marshal ruled the 2007 three-alarm fire as intentionally set by a man who barricaded himself in a liquor store he allegedly tried to rob. The man, who later died from smoke inhalation, allegedly fired shots at police and fire officials were told not to enter the building because it had not been secured by police. The shopping center, which housed nearly a dozen stores over two levels, was a complete loss with an estimated $3 million in damage.

Frederick resident Walt Cramer has volunteered with the company for 52 years. “I didn’t think I would get that involved in it, but once I got started, it just kept rolling,” he says noting he likes the friendships and camaraderie. “Everybody says the fire service is a big family and it truly is. We look out for each other. You just keep coming back. I tried one time to stay away for awhile and I couldn’t do it.”