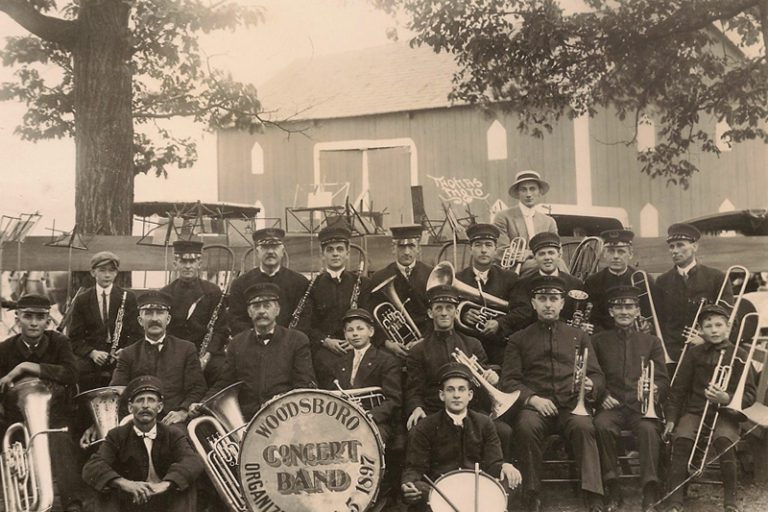 A New Chapter of History

Woodsboro’s old train station was in poor shape, says Jay Wolfe, president of the Woodsboro Historical Society, but the group pushed forward with plans to convert the building into a historical museum. “It’s been tough sledding,” Wolfe says. “You opened up a wall and there was more damage than you originally thought. Then things cost more [to renovate] than you originally thought.”

The work will have been worth it, he believes, when people come through the doors on Oct. 20 for an open house from 2 p.m. to 6 p.m. at 6 Creagerstown Road. “It’s been a long time coming,” he says. “It was a work in progress that really took off in the last seven years.”

Wolfe says the museum is a mix of personal items once belonging to the town’s well-known barbers or doctors, as well as items relating to historic businesses such as a blacksmith shop run by three generations and the Rosebud Perfume Co. that’s nationally known. “We also have a handful of family histories and collections of photos,” Wolfe says.

One of his favorite displays is a picture of the town’s former band. Many towns in the late 19th century had their own groups of musicians, Wolfe says. “We actually have some of the instruments.” A new museum location is certainly cause to beat the drum—although maybe not literally. www.woodsborohistoricalsociety.org

Nineteen years ago, when she was diagnosed with breast cancer, Patty Hurwitz says, “I remember sitting in my hotel room before my surgery and thinking, ‘Wouldn’t it be great if this could all be done in Frederick?’ At that time there was no Breast Center, no Women’s Center, no surgeons that specialized [in breast cancer treatment]. You had to go to Baltimore or Washington.”

That was the spark that started the Hurwitz Breast Cancer Fund at Frederick Memorial Hospital by Hurwitz and her husband, Jeff, owners of Colonial Jewelers in Downtown Frederick. The fund not only promotes the most innovative care options locally, but also advocates for early detection and treatment of the disease. Every dollar raised is used for the direct benefit of patients. The local fund schedules the bulk of its fundraising efforts during the national breast cancer awareness month, October.

Hitting its 10th anniversary is the Pink Ribbon 5k, a run/walk in Baker Park on Oct. 6. Held rain or shine, registration starts at 8 a.m. and the race begins at 9 a.m. “This year is targeted to be our largest in terms of participants, sponsors and fundraising,” says Meghan Sweigart, development coordinator at Frederick Memorial Hospital. Since the race began in 2008, funds have climbed to a point that this year it should reach about $1.7 million. Hurwitz says neighboring communities such as New Market, Thurmont and Middletown have their own races and contribute.

The 19th annual Pink Ribbon Gala will be held Oct. 20 from 7 p.m. to 9 p.m. at the James M Stockman Cancer Institute, 1562 Oppossumtown Pike, with cocktails, hors d’oeuvres and a silent auction that includes fine jewelry. To attend, email [email protected] or phone 240-566-3186. Having the gala at the James M Stockman Cancer Institute allows donors to see what their money has already built, fulfilling the dream Hurwitz had 19 years ago. www.pinkribbonfrederick.org

Vote for the Best

For the past 27 years Frederick Magazine readers have been weighing in on everything from who makes the best burgers to which restaurant is the most family-friendly in the annual Best of Frederick competition.

Finding Light in the Darkness

Suicide is the 12th-leading cause of death in Maryland among those ages 15 to 45. For those even younger, ages 10 to 14, it is the leading cause—sobering statistics indeed. In a push to bring awareness to the tragedy as well as giving a message of hope, the Frederick Out of the Darkness Community Walk will be held Oct. 20 in Baker Park. Registration is at 8:30 a.m. and the walk begins at 10 a.m.

Jill Martin, event co-chair with Zoe Macrum, says last year’s effort attracted more than 1,000 walkers and raised more than $85,000. This year’s goal is for 1,500 participants and $90,000 in donations. Monies raised are used for mental health research, outreach programs, education and support for survivors and their loved ones. “It’s OK not to be OK and to seek help,” Martin says of the group’s

message, which is also paired with, “If you have lost someone there is no shame in it. Be the voice to help others.” Martin says the walk is family- and dog-friendly. A map of the route and other information is available at www.afsp.org/frederick or www.facebook.com/frederickAFSPWalk.

The Middletown High School basketball court where the late Ron Engle spent decades influencing players now contains his name, created in script on the wooden floor. “It’s so well-deserved,” says girls head basketball coach Amy Poffenbarger. “It’s a great tribute to a great man.” In 22 years as varsity boys’ coach he had 20 winning seasons with 337 victories and 11 league titles. He was named coach of the year three times. He served as Middletown’s athletic director for 29 years and in 1984 was voted State Athletic Director of the Year. In 1989 he was inducted into the Frederick County Sports Hall of Fame.

Engle’s love of sports goes back to when he was a standout basketball and baseball player at Frederick High School and later pitched for Potomac State College and Shepherd College.

After he retired as head basketball coach, Engle returned as an assistant coach with the girls’ team. “He was very patient and taught them everything he knew,” Poffenbarger says. “He was a great teacher. He and his wife [Dottie] were great role models.” Poffenbarger says he attended many of the school’s games, whether it was softball or lacrosse. “I would also see him at Dempsey’s with his cronies,” she says, referring to the Middletown restaurant. “He was a big part of the community.” Engle died Oct. 15, 2016, at age 75. More than 500 people attended the celebration of his life.