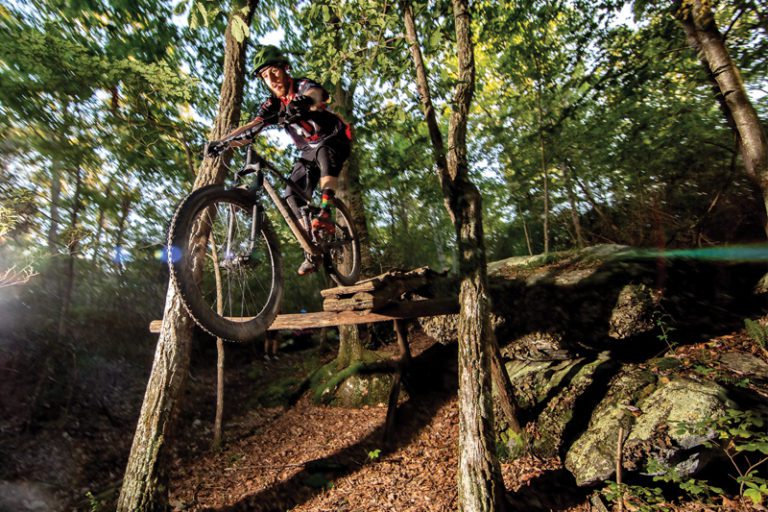 Frederick County is Emerging as a Mountain Biking Destination

Mountain biking is more than biking mountains. It’s biking through forests, on switchback trails that take you up heights you rarely experience on roads. You pedal until you’re nearly standing still; then you hope you can unclip from your pedals before you fall into the brush.

Mountain biking isn’t just for the young or athletically gifted. I am neither. If you can ride a bike uphill on the road, you can mountain bike. Frederick County has trails that stretch from beginner to expert, so if you just want to give it a try, you don’t have to go far. For beginning mountain bike trails, the bike you bought at the big box store will be just fine. Just get it tuned up at one of the local bike shops and take it for a ride on the pancake-flat towpath of the C&O Canal.

Once you’re comfortable riding on the canal there are a couple of beginner-friendly trails to try. Rainbow Lake Trail near Emmitsburg has some flat sections that allow you to get the feel of riding on a single track, a trail that’s not wide enough for two bikes. If you’re comfortable climbing hills on the road, head to River’s Edge Trail in Brunswick, where a 1.3-mile loop awaits.

Frederick County is known to mountain bikers along the East Coast as having one of the premier mountain bike areas within a short drive of major population areas. Gambrill State Park and the nearby Frederick City Watershed offer technical features that draw advanced riders to the area each weekend, and many evenings for those lucky enough to live here.

Here, riders clamber over boulders and descend on bone-jarring rocky paths. Rugged and steep, cyclists on these trails need the skills to turn on a dime. There are logs stacked pyramid style to jump over. There are rock gardens to navigate and streams to cross. These riders maneuver their bikes over territory that’s as difficult as any hiking trail.

But the watershed also offers trails where those new to mountain biking can practice steep climbs, without the rocks, log beds and twisting, tree-lined turns that challenge experts. On the watershed’s vast network of dirt roads, cyclists can practice climbing and descending without having to lift their front wheel over a rock or plunge down a massive boulder. The 7,500-acre watershed has 75 miles of dirt roads and trails, and 45 of those miles are hiking trails and twisted old logging paths closed to vehicles.

Joe Whitehair, a longtime mountain biker and Frederick resident, is a member of the Mid Atlantic Riding Enthusiasts, or MORE, a group of D.C.-area mountain bikers. He’s also part of the City of Frederick’s Watershed Advisory Committee. MORE is building and maintaining trails at the watershed under the auspices of the city and the state Department of Natural Resources, which oversees Gambrill. The trails are open to hikers, runners and fishermen, and the area is also a managed hunting area.

After years of rocky relations, the city and mountain bikers have decided to approach the watershed as a recreational resource. Whitehair moved to Frederick a dozen years ago because of its mountain bike appeal, and he’s helping to bridge relations between the city and the mountain bike community. Mountain bikers once created their own trails in the watershed, but now there are established trails, built to not only give bikers and hikers gorgeous views and solitude, but to also prevent erosion and preserve sensitive wildlife habitats.

Rainbow Lake is an ideal place to try your hand at mountain biking. This preserve near Emmitsburg is open to bikers and hikers on Sundays from mid-September to mid-May, and daily through the summer. “This trail spanked me real good,” one rider commented on a YouTube video about Rainbow Lake.

Rainbow Lake offers cyclists lots of options on its 16-mile, stacked-loop trail system. You can navigate through easy, wide trails without much elevation change on the warmup trail. If you want to challenge your skills, ride the intermediate or advanced loops, where you can find hills, roots, rocks, logs and tight turns. Emmitsburg, along with the watershed, sits along the Appalachian ridge, where forested areas rise into rocky slopes. It’s this ridge that makes the western part of Frederick County a mountain biking playground.

Rainbow Lake Trail happened because local residents wanted to bring some recreational use to an undeveloped area on the edge of Emmitsburg. Once known as College Mountain, a ski area was planned for the area in the 1980s. Opposition killed that plan, and the area was never developed.

Tim O’Donnell, an Emmitsburg Town Council member, moved to the community 15 years ago, but has been mountain biking for much longer than that. He worked with other council and community members to raise $500,000 and attract volunteers to build the color-coded trails at Rainbow Lake. O’Donnell, also a MORE member, wanted a series of trails that could appeal to the whole family.

There’s a purple trail for kids and new riders, a green easy trail, a yellow intermediate trail with some climbs and rocks, and a challenging red trail. “If a family comes to ride, you all could have a good time,” O’Donnell says. “This trail fits into the whole scheme of things that enhance the town of Emmitsburg.” He worked with MORE, the Frederick Bicycle Coalition and the Trail Conservancy, a Silver Spring-based trail design nonprofit, to build the trails. Funding came in the form of a large grant from a private individual and other grants and donations. To all this, add in 3,000 hours of volunteer labor from local residents and students from Mother Seton School. “It has cost the town virtually nothing,” O’Donnell says.

This summer, the trail attracted coaches from the National Interscholastic Cycling Association to hold a seminar at Rainbow Lake. “They go through intensive training to learn how to coach,” O’Donnell says. Mountain biking as a scholastic sport is in its infancy, but Frederick County now has a local team, the Monocacy Composite Mountain Bike Team.

The trail brings visitors from D.C. and Baltimore, and riders from as far away as New Hampshire and even Colorado have ridden the trails. “There are enough trails [that] you don’t run into other folks,” O’Donnell says.

Eventually, there will be more than 20 miles of trails open to not only bikers, but hikers, trail runners and dog walkers.

The existing trail is 1.3 miles, but a new mile-long trail should be ready by late fall. Eventually, 5 miles of single track will wind through the hilly, wooded park. For local riders who don’t mind riding a few loops, the trails are fun and challenging, without the heart-stopping rock beds of the watershed trail. There are some fun water crossings along with the constant elevation changes.

“It is a trail for everybody,” Alfano says. “Lots of runners, hikers and dog walkers use it. There are some punchy climbs, but not many rocks.”

At a recent trail clearing day, adults and kids came out to clip, rake and cut trees and plants growing on the planned switchback trail. Many of the kids are members of the Monocacy Composite Mountain Bike Team, and Alfano is a coach. The team is part of the Maryland Interscholastic Cycling League, an emerging league for middle and high schoolers interested in learning how to mountain bike.

“The whole idea of this is to get kids on bikes,” he says. “We teach them how to ride properly and in a race environment.” Adult volunteers are also welcome. “We’re always looking for coaches,” Alfano says. His own teenage son races, but not all kids who want to mountain bike have the advantage of a parent who can ride along with them.

The new trail being cut by volunteers is the result of a $40,000 grant Alfano obtained, with 20 percent matched in donations. After volunteers clear what they can by hand, a professional trail builder will cut the trail to the ground and remove overhanging branches. “These trails are built with sustainability in mind,” Alfano says. Trails are built to drain without eroding the land below. Obstructive water bars, often used to build 20th-century trails, are a thing of the past. “Now we’re going to meander down the ridge and build in bench cuts so water can wash down without taking earth along with it.”

On a recent hot, humid day, trail-cutting volunteers were happy to be working in the shade of the woods. O’Donnell ventured down from Emmitsburg to lend a hand, along with other mountain bikers from Frederick and Brunswick.

Bill Brim and his sons Dillon, 16, and Devin, 15, carried lopping shears and were looking forward to riding the trails. They ride locally at the pump track in Frederick and at Schaeffer Farm, a popular mountain biking venue for all levels of riders in Germantown. “They’re really taking to it,” their dad says.

Frederick youngsters Patrick Griffin, 12, and Sean Kettlestrings 13, pulled a sapling out of the soft earth with a lopper. “This is hard work, but it’s fun,” Sean says. They’re planning to participate in the scholastic race on Nov. 4, which is expected to have timed loops of 45 to 55 minutes for middle schoolers and 60 to 80 minutes for high schoolers.

Kaitlyn Koehler, 13, of Frederick, is excited about the mountain biking league. She’s one of several girls in the league, which is hoping to attract more girls. “I like the adventure of it,” Kaitlyn says. “I like seeing new places and new terrain. I don’t like the uphill so much, but I like the downhill. I like to go real fast and do the jumps.”

On a weekend in late August, 119 mountain bikers from around the region came to the watershed for its first official mountain bike race. It was an enduro race, because only downhill sections were timed. Riders traversed a course from ThorpeWood, near Thurmont, to the watershed lake. Dubbed the Sheduro, riders competed in various divisions, including women’s divisions for the 13 female riders.

Race organizer Dan Green planned the race to raise awareness, along with money for trail building and informational kiosks in the watershed. He is MORE’s trail liaison for the city park, and he works with the city’s sustainability director, Jenny Willoughby, to organize trail cleanups and trail maintenance in the watershed. After he learned of an uphill running race last spring at the watershed, he asked to do a mountain bike race.

“I got Jenny’s approval, and we hit the ground running,” he says. Green, a Frederick teacher who also works at Bike Doctor in Frederick, thought the race could raise money for trail building. Armed with a $30,000 State Highway Association grant, he raised some matching funds through donations. The race brought in $4,000, enough to almost reach the goal.

The first trail to be built will start near a spring at the bottom of Hamburg Road and rise, switchback style, to the apex of the hill. “It’s a smooth and relaxed grade,” Green says. “It’s a flowy, family-friendly climb.” It should appeal to most riders.

Frederick is embracing mountain bikers from beginner to expert, Green says. “It’s not unfair to call the watershed world-class,” he says. “It’s a destination worth traveling to. And the commitment we have from the city is great. Jenny Willoughby is a big part of that. She’s passionate about it.”