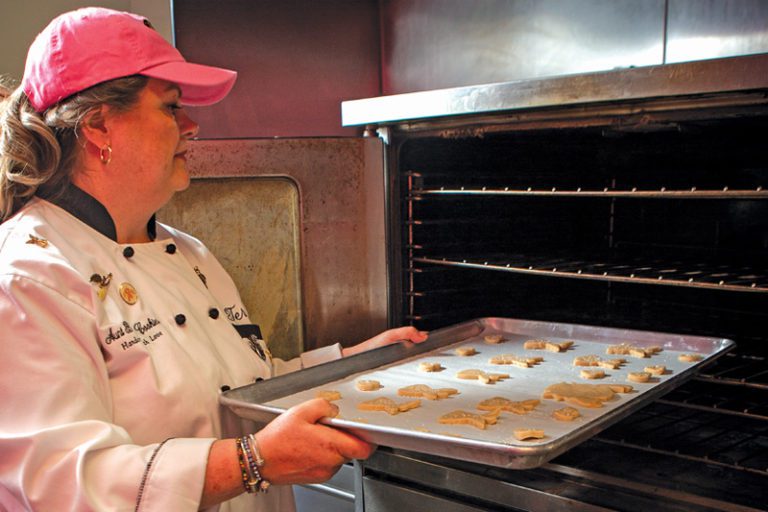 Many have the dream. Some have the drive. But only a few have what it takes to get their dreams across the finish line. It took years, but Terri Rowe is now on the winning side of that line. She owns Maryland Bakes, a commercial kitchen on West Patrick Street where local food artists can rent the space to create their products and meet clients.

It was an idea born out of necessity. Rowe is also the owner of Aunt B’s Angel Cookies. Finding a suitable place to bake was always a challenge. “I used to bake in my home under the cottage [food] laws,’ but it took over my house. And if I had a big order, I could not bake enough in my house,” Rowe says.

Eventually, she found a rental kitchen at a local Grange hall. “I had to schlep everything in, and then pack it back out again. I also had to share the space with other groups using the hall. There might be an exercise class there, too, or a meeting going on. I couldn’t count on just going in and baking,” she says.

Rowe dreamed of a professional place to bake, shared with other chefs, but there weren’t any commercial co-op kitchens in the Frederick area. The need was so great, Rowe says the first question food professionals asked one another upon meeting was, “Where do you cook?”

The clients using Maryland Bakes all have other jobs, Rowe says. They’re either running a side food business to satisfy their passion, or in the process of trying to start a larger business. Either way, funding a kitchen that costs thousands of dollars and keeping up with facility maintenance doesn’t fit most of their business plans. “It took me a long, long time to make this kitchen a reality. I gave up on this dream a couple of times. Just about when I had finally let it go for good, I found this space,” she says.

It was a former restaurant and already had many of the features Rowe would need including the right plumbing and an expensive exhaust hood. It seemed the pieces were falling into place and she decided that if she didn’t try now, she’d regret it the rest of her life.

“I took a leap of faith and started Maryland Bakes so that other owners like me could grow their businesses,” Rowe says. She can now bake 300 cookies at one time, a task that would have taken all day if she baked at home.

When twin sisters Katrice and Karin Scott started Two Sweet, a commercial kitchen was one of their top priorities. The two make a variety of sweet creations, specializing in sugar cookies with custom logos and themes. “We wanted to hit the ground running,” says Katrice. “Until we heard about Maryland Bakes, we thought we were going to have to travel down [Interstate] 270 to find a kitchen to rent. That’s a long haul, and those places don’t have parking, so it makes it really difficult to drop off your supplies.”

She adds, “Everything that goes into starting our own kitchen seemed like a nightmare, so it’s great that Terri handles all that. She’s made the whole process so much easier.”

The kitchen is licensed by the Frederick County Health Department and each participant must also hold a license from the agency. This is not a place for people to just pop in and make a pile of pies for their holiday get together.

The kitchen is run as a co-op. Clients pay a base membership fee and receive so many hours of usage per month. If they need more than that, the member pays by the hour. Each business has its own space within the kitchen and can leave their equipment so they don’t have to carry it in and out every time they come to cook. There is also dry storage and cold storage.

Tennille Middleton, also known as Chef T, uses Maryland Bakes to prepare for her catering events. She works full-time in the food industry and was a finalist on the TV show Hell’s Kitchen. Her company, Red Clay and Pigs, handles a variety of corporate and private events. “It’s not my livelihood, but it’s a way to keep my passion alive,” Middleton says.

She initially had many clients in Prince George’s County and used a kitchen in Greenbelt. When her client list shifted closer to Frederick, she searched for a long time to find a local kitchen. “Maryland Bakes has really changed the amount of business I can do,” she says. “I don’t have to commute or pack equipment. I don’t have to buy groceries the day of my preparation. I can have my food supplier deliver ahead of time directly to the kitchen because I have cold and dry storage there.”

Neal Oa of Omma’s BBQ is a slightly different customer. He manufactures and bottles his grandmother’s Korean marinade recipe at Maryland Bakes. His product requires that he hold a license from the state of Maryland and use a commercial kitchen.

Oa is beginning to expand into food preparation, working with local breweries to provide authentic Korean food at their events. His next step is a food truck and then he hopes to eventually move to a brick-and-mortar restaurant.

“Having this kitchen changes the way you operate. If I had to use a place in Rockville, I would probably have bought most of my produce there in order to get the freshest offerings. Because of this co-op, I can support local growers,” he says.

The kitchen is available 24/7, but the health department states that only one entity can use the kitchen at any given time, so Rowe manages a schedule with Google Calendar. In addition to the kitchen area, Rowe also offers a room where members can meet with clients for tastings and planning. “Members can have their clients pick up orders at the site, and there is an opportunity to do retail through pop-up shops,” she says.

“Maryland Bakes alleviates a lot of stress for us and its affordable,” says Middleton. “You can tell by the way Terri handles the kitchen that she really believes in it. It’s a great option for small entrepreneurs.”