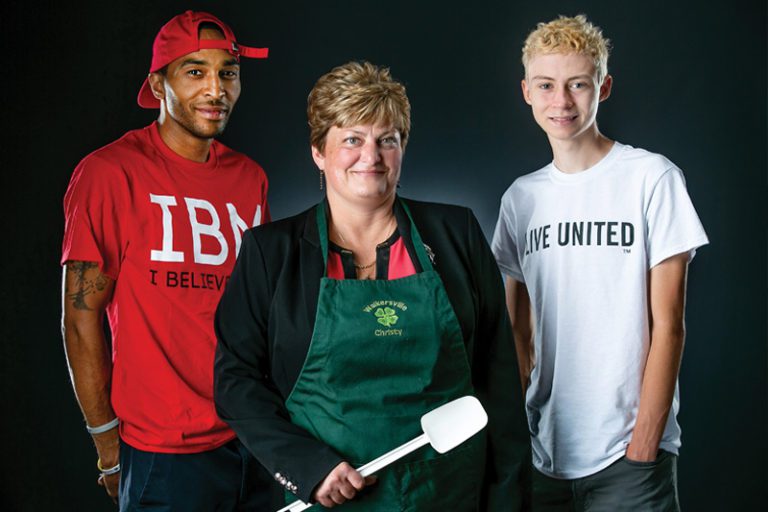 Betsy Day, president and CEO of The Community Foundation of Frederick County, has had a bird’s-eye view of the impact volunteers make in the community for the past 16 years. “Each year the caliber of volunteers increases,” Day says.

Her organization oversees the Wertheimer Fellows for Excellence in Volunteerism awards, which are honoring two adults and one youth for their exemplary volunteer work. The recipients are first nominated and then a committee of volunteers makes recommendations on who should receive the awards.

Named in honor of the late Janis Miller Wertheimer, a community leader, business woman, volunteer and philanthropist, the adult recipients of the award each receive $25,000 to add to an existing fund or to create a new endowment with the Community Foundation, with annual proceeds targeted to the nonprofit of their choosing. For the Youth in Action awards, the foundation grants a one-time grant of $2,000 to the recipient’s favorite nonprofit.

“When Janis Miller Wertheimer passed away, she included a bequest to the Community Foundation for us to create an endowment fund that would support Frederick County nonprofits. And our board was so surprised by Ms. Wertheimer’s generosity, but we also wanted to honor her for her activism, just for being one of those solid community citizens that make Frederick County what it is today,” Day says. “These awards go to the citizen’s servant. This is not necessarily the person who gets all the fame and fortune. It’s for the ones who fly under the radar with little recognition but who do solid community service work.”

It was in Atlanta, Ga., where Aje Hill first started volunteering. He bonded with kids as he transported them to and from their doctor and therapy appointments, and he also uncovered his gift—that of a mentor, listener, adviser and friend to underprivileged youth. It was there that it all clicked and he saw the important role volunteers play in a child’s life. He knew he had to come back to Frederick, his hometown, and give back to his community.

This was the impetus for I Believe in Me, a nonprofit Hill started in Frederick in 2016 that provides mentoring as well as self-esteem, character and peer-relationship building, reading and math programs, and community outreach to males under the age of 16. It was his way of keeping these boys from making the same destructive choices Hill made as a young man. “I used to sell dope. I never slept. Now I call myself a hope dealer. If any of these kids call me, they need me, they need to ask a question … I try to be their guy,” Hill says.

The 55 youths in Hill’s program are picked up daily after school and are brought to Asbury United Methodist Church on West All Saints Street where they eat a snack before diving into their homework. “We make them accountable to learn,” he says. “Then we’ll get into some after-school fun—basketball, swimming, etc. What we’re teaching is the same thing mom and dad are saying but what’s different is I’ve been to that dark place. I’m giving them the real motion picture. I’m telling them, ‘You don’t want to do that, bro.’”

Hill is creating The I Believe in Me Fund with his Wertheimer Award. Grants from the endowment will help pay for a more reliable van to help transport the youth and to help secure a building for his organization. “It’s such an honorable award that Ms. Wertheimer left for the community. This shows there is still hope alive in our community if we want to do better. I’d like to say an extra thanks to the Community Foundation and everyone who had the thought to nominate me for this award. When they called me and said I won … I got down on my knees to thank God. I’m just super thankful.”

The Frederick County 4-H Camp and Activities Center is like a second home to Christy Fuss. Located on more than 85 acres between Adamstown and Jefferson, the center is a hub for camping, recreation and other activities for 4-H participants across the county. Fuss first got involved in 4-H in 1981 at a neighbor’s urging, later becoming a camp counselor and even introducing her husband, David, and daughters Kaitlyn and Ashley to 4-H life. It quickly became a family affair.

“Our next-door neighbor had a 4-H club that she was the leader of and she talked us into joining 4-H,” Fuss says. “I started out doing swing projects and cooking projects and then I had rabbits, we raised dairy goats, and then we showed steers a couple of years, and when my daughters got into 4-H, we decided to try sheep.”

Fuss has seen the difference 4-H makes in the lives of children, helping them learn important life skills along the way. “I believe 4-H is a great stepping stone for these kids,” Fuss says. “It gives them respect. It gives them work ethic. It teaches them responsibility and all of that comes from the things you learn from 4-H.”

Fuss has established The Fuss Family 4-H Camp Center Volunteer Fund with her Wertheimer Award, and will allocate grants from the endowment to the 4-H center. She says she is grateful for the award and that it all caught her by surprise.

“I really didn’t know anything about it.” Fuss says. “They [members of the 4-H center] came and said, ‘Can I put your name in for it?’ I just kind of stay in the background. I’m a country bumpkin that stays in the background. I’m very humbled that they feel I have enough that I can contribute to the camp center in this way.”

Simon Price is a typical teenager who enjoys video games, playing soccer and hanging with his friends. What sets him apart is his level of volunteerism. Price has volunteered for the past five years and, equally impressive, he has spent those years volunteering for the same organization—the United Way of Frederick County. “I am 16 and first started volunteering five years ago when I was a student at Oakdale Middle School,” Price says. “I currently volunteer for the United Way Summer Serve program and have also volunteered for other United Way activities like Stuff the Bus.”

Price will direct his $2,000 award to United Way and is thankful to support his favorite charity in this way. “I feel as though volunteering has made me a better person because I have realized how many people truly need help in my community,” he says.