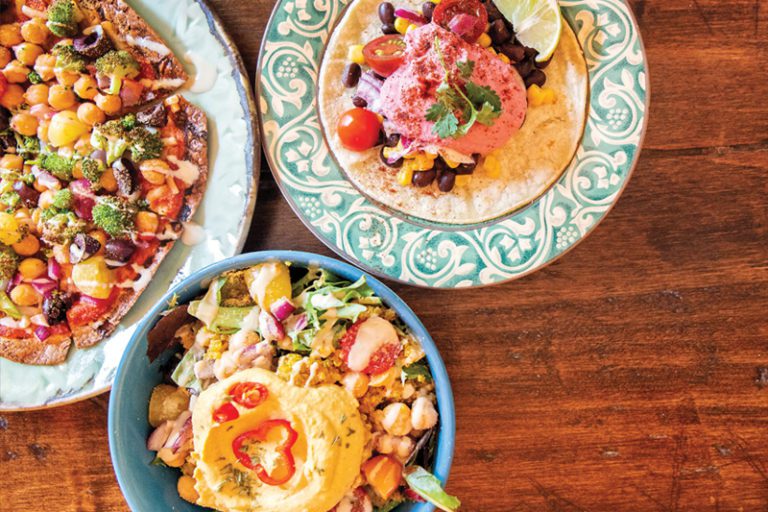 Eating out should be a joyful experience.. It’’s a chance to gather with friends and family, to relax and feel pampered, partaking in treats that we wouldn’t, or couldn’t, make at home. Food can be a relatively accessible luxury, whether that means grabbing takeout  for a picnic, indulging in your favorite fast food or going all out with an evening of fine dining. Frederick’s notable restaurant scene is an omnivore’s paradise, but for those with dietary restrictions, whether for ethical reasons, religious dictates, health concerns or simple preference, choosing where to go and what to eat can be a bit more complicated.

Following a vegetarian diet is an ancient tradition, which remains especially popular throughout Asia, India and the Middle East. A 2018 report by The Economic and Social Research Institute estimated there are 1.5 billion vegetarians worldwide, by choice or economic necessity. India is the world leader with about 30 percent of inhabitants leaving meat off the table. Israel ranks second at 13 percent vegetarian, according to WorldAtlas news. But just under 4 percent of Americans claim vegetarian/ vegan status, according to various estimates.

Alissa Straiter grew up in Frederick and chose vegetarianism at age 15, citing compassion for animals as her primary motivation. “It didn’t make sense that I love animals so much but consumed them.” She gathered information online. “I wanted to learn everything I could. … After doing my research, it was an easy decision [to give up meat].”

Straiter and her wife, Keirsten, went vegan 10 years ago. (Vegans avoid all animal products, while vegetarians may consume honey, eggs, milk, cheese and other dairy products.) “We love to cook and bake. We like to take traditionally non-vegan recipes and veganize them.” But when they asked themselves what they missed the most since going vegan, the answer was doughnuts. The revelation prompted them to start a business. So, the food-loving duo rented the All Saints’ Episcopal Church kitchen, working overnight to churn out conscientiously indulgent vegan doughnuts that everyone could enjoy. They sold at pop-up shops, area events and farmers’ markets, even adding some wholesale customers, before opening Glory Doughnuts, now Glory Dough & Diner, in 2015 at 244 E. Church St.

The business rotates through a roster of more than 40 doughnut flavors, including seasonal specialties. Current top sellers are cold-brewed cream, lavender frosted and a classic Boston cream, standing up to consistent winners such as maple bourbon, Death by Peanut Butter, and chocolate peanut butter pretzel. The popularity of these fried morsels convinced the Straiters to expand the menu. There are Bahn Mi blue corn tacos with peanut-marinated tofu alongside spinach-walnut strudel, hearty salads, tofu scrambles, crispy stuffed French toast and a few converted family favorites. “Our stuffed shells with homemade marinara sauce and potato-n’-onion pierogis are family recipes,” says Straiter. “Our from-scratch pancake batter is, too.”

Silky tofu, a.k.a. bean curd, is a common vegan replacement for eggs. Bakers often reach for finely ground flax seeds, applesauce, mashed bananas or avocado, even commercially prepared egg replacers made with potato starch. Soaked and blended raw cashews stand in nicely for sour cream and soft cheeses. When asked if they’ve ever come up against a recipe that couldn’t be transformed, Straiter chuckles, “We don’t give up easily.”

Erika Brown, fellow Frederick native and owner of Hippy Chick Hummus at 237 N. Market St., says she was a vegetarian before she knew what that meant. Now vegan, she says, “I consider myself a born vegetarian because I’ve never really had a taste for meat.” She discovered a knack for making hummus in college, where hungry roommates gobbled up her creative interpretations of the dish. Friends started requesting special orders. “That’s when I realized I could potentially have a business on my hands.” One of her earliest concoctions, a spicy hummus made with pumpkin purée, hot peppers and cinnamon, is especially popular at her restaurant during fall.

Like Straiter, Brown first took her wares to the farmers’ markets. There, her following grew and she connected with like-minded business leaders, such as Liz Dodson aka The Kombucha Lady, of Thurmont. Brown stocks Dotson’s fizzy probiotic brew in complement to her own 100-percent vegan, plant-based menu items. Fans can pick up products by both purveyors at The Common Market and Firestone’s Market on Market. “Coconut curry is a popular hummus flavor because it’s so unique. It’s very thick and creamy.” Brown adds, “The ‘Everything Bagel’ variety is definitely the most popular flavor at all of the outlets.” It is her version of a traditional hummus with sesame tahini, flavored oil, onion, garlic and poppyseeds. Garlicky and piquant, “Buffalo” is also popular.

At the restaurant, Brown dishes out 24 pounds of hummus on an average day and flows through 10 half-kegs of kombucha per week. She says her menu, which includes a brown rice crusted pizza with cashew-based cheese and black bean tacos, has a broad appeal because it focuses on flavor. “We get a little bit of everybody, not just vegans.”

Brown and Straiter agree that Frederick now offers a respectable breadth of dining options for nonmeat eaters, but that wasn’t always the case. Brown sighs deeply, remembering one dinner out with friends. “I ordered a mix of vegetables and I literally got just a bowl of carrots.”

Mainstream restaurateurs are taking note of rising demand. Baum + Whiteman, international food and restaurant consultants, named plant-based dining the “2018 Food Trend of the Year.” Online resources help buoy the cause as well. The American Vegetarian Association certifies products for easy identification. Its site says 31 percent of Americans practice meat-free days and 83 percent of U.S. consumers add plant-based foods to improve health. The Baltimore-based Vegetarian Resource Group offers an extensive guide to commercial ingredients, noting if it is derived from any part of an animal. The list has some surprises, often vaguely classified as “natural flavors” or processing agents. Activated carbon, cane sugar and invert sugar syrup, as well as folic acid, may come from nonvegetarian sources, which leaves product research up to the individual.

Straiter ponders the change, noting the 1960s as a previous heyday for vegetarian values. “In the past decade, vegetarianism and veganism have really caught on as people are starting to care more about their food and where it comes from.”

An autoimmune disorder motivated Diana Ray to go gluten-free and vegan in 2008. She was surprised to find out that, in rare cases, maple syrup is processed with lard to keep it from boiling over. She’s since added items back into her diet while managing several businesses for the Winder Company, including the Good Juju vegan café at 300 E. Second St. Owner Terri Winder is also vegan. Ray says, “This restaurant is about celebrating what we can eat.”

Nonvegetarians often question how to get enough protein, sans meat. Ray readily replies, “There is protein in all sorts of things. There’s more in vegetables than you’d think. If you’re eating a variety, protein is probably not the thing you need to worry about.” Indeed, beans, nuts, seeds, tofu and tempeh are good protein sources. An adult’s daily protein requirement is generally calculated as .9 grams per kilogram body weight. That means a 154-pound person would need 60 to 65 grams of protein. As an example, two slices of toast with two tablespoons of peanut butter delivers a hearty 15 grams of protein. A cup of cooked lentils delivers 18 grams and a cup of broccoli has 4 grams.

Coming up with new recipes for Good Juju’s wraps, smoothie bowls, juices, soups and salads is a group effort. Ray nods to a “cheesecake” in their cooler. “I found that recipe when I was sick because I couldn’t have a birthday cake. … It is nutritious enough to eat for breakfast. It’s relatively low in sugar and high in protein, but decadent tasting.”

The Great White Buffalo sandwich is a lunchtime showstopper with zesty cauliflower, cheddar-style cheese, crunchy romaine lettuce and house-made ranch dressing. Breakfast fans can get the Lumberjack, a stack of grilled tempeh bacon and “cheddar”, spinach, peppers, mushrooms and maple syrup on an English muffin, from open to close. Ray’s favorite is the Roasted Root Wrap with a caramelized mélange of beets, onions and carrots drizzled with curried ranch. The berry/almond milk Razzle-Dazzle smoothie is a top seller.

Cafe Nola at the corner of Market and Patrick streets started a decade ago, offering modern American fare in a casual atmosphere. Serious java-lovers rave about its meticulously brewed Counter Culture coffee. (All the flavored syrups are vegan, excluding the white chocolate.) It’s a hotspot for breakfast, which is served all day, but is also known for its evening entertainment such as open mic nights, DJs and regional bands. Boasting a full bar, Cafe Nola is a pioneer of infused liquors in this area.

The restaurant serves meat but is committed to veg-friendly fare, thanks to its original vegetarian owner, Dave Snyder. General manage Logan Hunter estimates that 75 percent of the current staff is either vegan or vegetarian. “Everything is listed on the menu. If there’s any question, servers are well-versed in what goes into the dishes and they can always ask the chef.” He understands how unexpected ingredients can ruin a meal, such as creamy beans augmented with pork fat or “vegetable” soup with chicken broth. Some alcoholic cocktails incorporate cream or eggs for body. “We don’t want anybody to be surprised.” Meat products and veg food are grilled separately, although there is a shared fryer.

Smoky tempeh is a tasty substitute for shaved ribeye in Cafe Nola’s steak-and-cheese sandwich. It can be customized with provolone, pickled hot peppers, caramelized onions and roasted garlic mayo or Veganaise. The bacon-like tempeh also stars in a breakfast hash, while the black bean wrap with salsa and avocado has been a feature since the beginning. One new vegetarian selection is a portobello grilled cheese with braised kale and sun-dried tomato jam. It comes on rye bread with Swiss cheese. The menu occasionally includes a vegan “crab cake” made with artichokes and hearts of palm. Hunter says it’s great for converts who miss this regional specialty. “People can still get that Maryland comfort food without having to sacrifice their dietary restrictions.”

For others toying with the idea of giving up animal products, Brown suggests baby steps. “Start with one day a week. Don’t pressure yourself to commit for a lifetime.” Her customers report feeling good even if they only eat one or two vegan meals per week because “they’re eating clean, conscientious foods.”

Straiter concurs. “You are striving for progress, not perfection.” She recommends gradually eliminating certain foods while learning new cooking styles and nutrition fundamentals. “Every little bit makes a difference.”

“Have fun with it,” says Ray. “The more you look around, the more questions you ask, the more you’ll find. There is so much beautiful vegetarian and vegan food out there to try. It’s not a struggle, especially in this town.”

Brown is enthusiastic, too. “Frederick is probably one of the best places to be a vegan.”