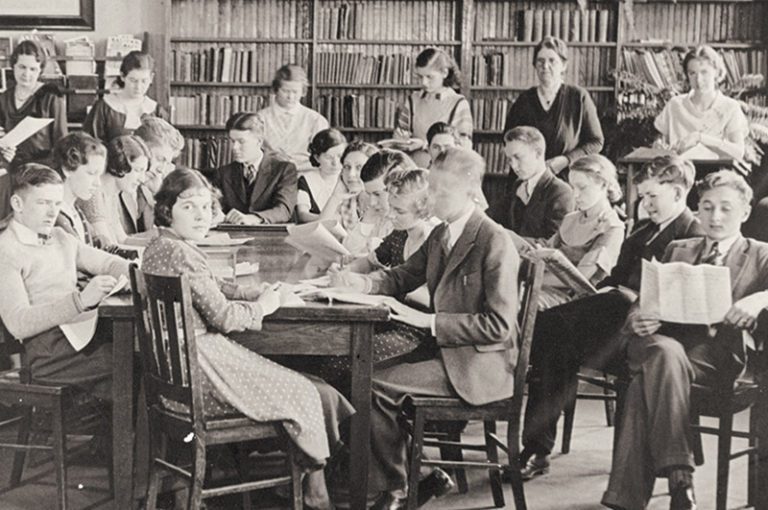 Once again, it’s time for local students to head back to school. For these Frederick High School students, it was back to their typewriters at the school’s newspaper, the Frederick Hi-Flier. The 1933-34 newspaper staff is pictured here with their teachers and faculty editors, Julia Shuff and Grace Lough (in the back, right corner).

The newspaper staff would have had no shortage of stories in 1933. In September, the state and county decided to repeal Prohibition, except for Middletown, which remained the dry stronghold of the county. In October, Adolf Hitler withdrew the German delegation from disarmament talks in Europe, employers in Frederick examined the county’s recovery from the Great Depression and Dr. O. Thomas Strother of Brunswick was found not guilty of a patient’s manslaughter after only 45 minutes of jury deliberation. In November, William P. Morsell of Feagaville was attacked by a neighbor’s runaway bull, which was then chased off by his 14-year-old grandson, and the Tivoli Theatre showed Mae West in I’m No Angel and Katharine Hepburn in Christopher Strong. The year ended with news of Charles Lindbergh’s successful 21-country flight, actor Gary Cooper’s marriage to actress Veronica Balfe and the successful extinguishing of four forest fires on Catoctin and South mountains by the Civilian Conservation Corps and local fire companies. Today, the Frederick High School newspaper is still going strong, now delivered electronically and with the more grammatically correct title of The Frederick High Flyer.