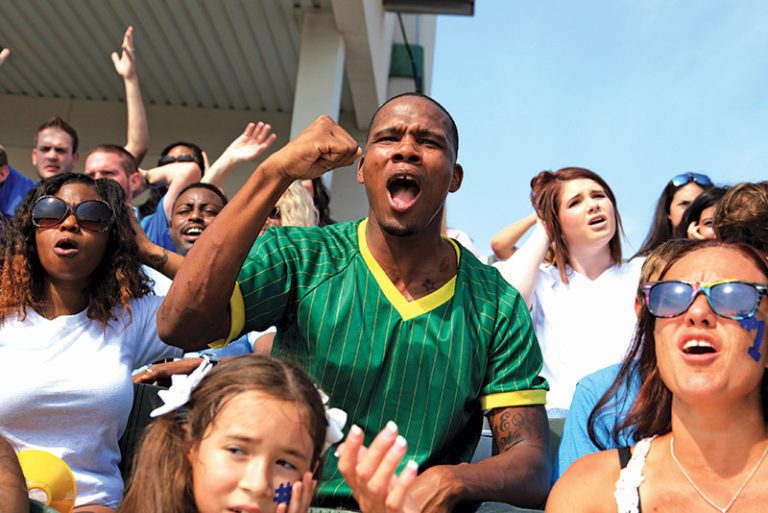 Depending on who you ask, last January’s regular season girls basketball game between Frederick and Linganore high schools represented either a watershed moment in the local discussions of race and sportsmanship or it was an overblown incident in which an entire school was wrongly criticized for the actions of a very few.

But there’s no denying the episode spurred a greater dialogue about tolerance, inclusiveness and cultural proficiency in county schools.

Those attending Frederick County Public Schools’ sporting events this year will personally hear a part of that growing dialogue in the form of a new, systemwide message to be read before each game over the public-address system. “The focus [in the message] is on our commitment to safety, sportsmanship, cultural proficiency and respect for all,” says Kevin Kendro, supervisor of athletics and extracurricular activities for Frederick County Public Schools.

Previously, the sportsmanship message read before contests was created by each individual school. “All of our schools did a great job having some type of message before the games begin regarding sportsmanship, but we wanted to come up with a systemic message,” Kendro says.

A countywide message was being discussed before the Frederick and Linganore game that garnered national headlines, but it was finalized in early summer and sent to school principals and athletic directors in late July, Kendro says.

Though a regular season contest, the game at Linganore was played with playoff-like intensity with only a few points separating the two teams throughout, including multiple lead changes and ties. The Cadets, the then-reigning 3A champions, won 58-51 but county staff would receive dozens of reports during the next several days alleging Frederick players were subjected to racial slurs and offensive language by those on the Linganore sidelines. Meanwhile, some Linganore fans disputed the claims.

An investigation was launched, disciplinary action was taken, Superintendent Theresa R. Alban spoke to both schools’ student bodies about fan behavior and the teams’ next matchup, a March sectional playoff, was held at Hood College’s BB&T Arena in front of no spectators save for player family members and team staff. The game, which Frederick won, was streamed on YouTube for others.

Willie Mahone, president of the Frederick County NAACP, understood the concern for safety, but was not in favor of the game being moved because he knows of many community members with no current ties to the school who enjoy coming to games every year. “This is wrong to cut them out of this,” he says. “That is a form of recreation for them. This is something they really enjoy. It gives them the chance to connect with those kids. It’s almost like a community event because when they go there they connect with other people. It was a positive part of community interaction that was being taken away and I just didn’t agree with that. Taken away because of a small portion of people, I would presume, that acted in a very uncivilized way and you caused everybody else to be penalized. … I saw it as a way of dodging the problem.”

Some fans get caught up in the home-versus-away aspect of games, even to extremes. Mahone read the regular season game as Linganore saying, “This is our house. If you all come out here at our house, you have to deal with us.”

For its part, Linganore was involved in another dustup regarding cultural proficiency last year when principal Nancy Doll was criticized by many students and community members for not allowing the Lancer mascot, a Native American chief, to don a headdress at athletic events. Some noted the headdress was offensive and racially insensitive while others saw the costume as celebration of Native American heritage.

When asked what FCPS learned from the Frederick-Linganore experience, Kendro notes sportsmanship in general needs to be improved, not just in the county but across the state and country. “That’s something we [at FCPS] have made a conscious effort to do, but we know we have a ways to go and tying sportsmanship to cultural proficiency, that is our commitment.” he says. “Moving forward we are adding layers to our commitment to sportsmanship, cultural proficiency and respect for all.”

The new pre-game message discusses safety, noting exit locations in case of an emergency and also an advisory to listen to the public address announcer for additional information. But Kendro says the sportsmanship section notes, “The use of racial slurs or discriminatory practices are unacceptable and should be reported immediately to a school administrator on duty or the athletic director.” He adds, “That is something we did not have in our sportsmanship message previously, but moving forward that will now be included.”

This addition underscores the commitment to cultural proficiency, he says. “Moving forward, we know this is something we really want to emphasize, and we want to make sure not only our student athletes hear it, but our coaches hear it, our parents in the stands hear it and our spectators hear it. Safety, sportsmanship, cultural proficiency and respect for all are the areas we really wanted to focus on in our pre-contest message.”

Kendro notes when any county school hosts an athletic event it requires a group effort from planning to the last person leaving the facility. “It’s not just, ‘Hey, you show up at a game and two teams play,’” he says. “There is a lot of preparation that takes place before the contest. There is a lot that goes on during the contest and then there is even more that goes on as the contest concludes — that would be exiting the stadium, parking lot, officers directing traffic out of games. It is a very structured environment and it is a very safe environment for all involved.”

Typically, a school’s athletic director works with game management staff before each sport season starts. The staff consists of school personnel who handle a variety of duties, including taking tickets and walking around the facility to make sure the game is running smoothly. The athletic director writes two plans: a game management plan as well as an emergency action plan for each contest, so everyone knows their responsibilities.

Each school also determines how many Frederick County Sheriff’s Office deputies they would like present at each game. These security details are secondary employment for the deputies. “We take direction from the school administrators, unless we observe a crime occurring in our presence [and] then we take action based as if we were out on the street,” says Maj. Tim Clarke. “We are there in uniform to provide a presence and keep the peace and that’s what we do. I would say at 99.9 percent of the events there is not an issue.”

The agency receives training every year on cultural proficiency and each high school has a Sheriff’s Office school resource officer. “We are simply there for the safety of the students and to maintain peace and order,” Clarke says.

If a student or adult hears a racial slur or witnesses an unsafe situation, they should bring the matter to the attention of the athletic director or a member of the game management staff. “It would be appropriate for them and we would expect them to report [it],” Kendro says.

Similarly, a player hearing a racial slur is instructed to tell their coach. The county has procedures in place when reporting accusations at sporting events; they are sent to the athletic director and then on to the administration.“We would always want student athletes to feel welcome and safe and if … they do hear something or see something, that they have every right to report it and that’s what we want them to do,” Kendro says.

Students may face disciplinary action if an investigation concurs a slur was used. Adults may be asked by staff or sheriff’s deputies to leave a game if they are being unruly. “When I speak with parents and Parent Teacher Student Association groups and athletic directors and new coaches, I remind them this is not a professional sporting event,” Kendro says. “It’s also not a youth or rec sporting event and it’s not a club sporting event. It’s a high school athletic event and high school athletic events are different. They are student-centered and education-based. They are basically an extension of the classroom, an extension of the school day. I call athletic events … [the] fifth, sixth or seventh period that day. With safety being our top priority, just behind that would be our commitment to making sure that sportsmanship is a top priority and tied into sportsmanship is cultural proficiency and respect for all. We want all to feel welcome at our athletic events and I would want our parents and spectators to know that we are doing everything in our power to make sure that is happening.”

Keith Harris, executive director for FCPS’s Accelerating Achievement and Equity Department, says the Frederick/ Linganore game showed school staff and students have the ability to come together to address issues to find solutions. “One of the things we know—whether it is our school system, whether it is our society—we are not immune to conflict. We are not immune to racial, ethical issues, but nonetheless the key is not whether or not those things exist, it is how we respond to them when they do occur. That incident and the response to it really showed how our students and our staff and our school administrators came together to problem solve a situation that was a mutually agreeable outcome on all parties concerned.”

Eric Louers Phillips, supervisor of Accelerating Achievement and Equity, notes another lesson learned. “You have two different schools, two different communities and we learned a lot about perception and how people see a situation,” he says. “From that, it informs our work. As central office [staff] and administrators, we serve the entire school system so understanding that one incident can be perceived two different ways.”

Meanwhile, professional learning plans and training are constantly evolving to make sure up-to-date information is being used. “If we maintain the same [professional learning] that we had before the incident after the incident, then we are not showing that we are adapting to the needs of our school system,” Phillips says. “There was already something in place, but what we have done since then is we have looked at what we already have and we have looked at, ‘How do we make it more effective and more meaningful to give to our athletic directors, coaches and referees and so forth?’”

One responsibility of the Accelerating Achievement and Equity Department is training and supporting all FCPS leaders in culturally proficient and culturally responsive classroom practices and resources to best meet the needs of a diverse student population. “It is very key in our system goals and our priorities that we promote and meet the needs of our diverse student body, our diverse workforce and be responsive and appreciative of our growing community cultures as well,” Harris says.