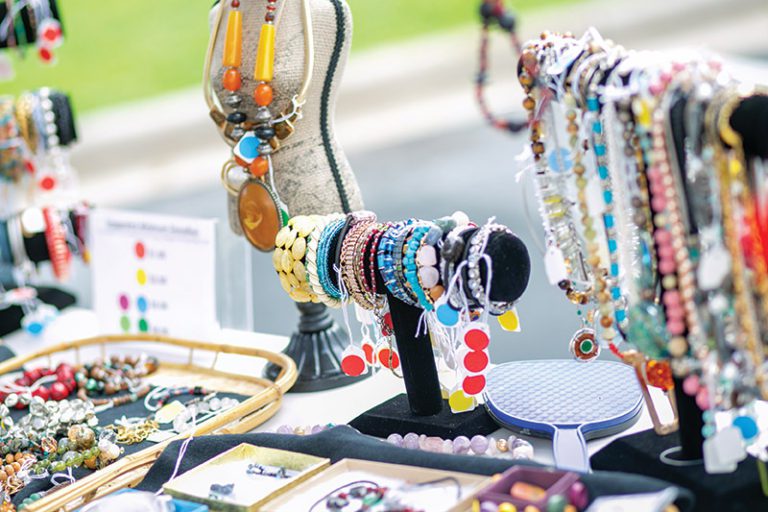 Aspiring entrepreneurs have been searching for unique ways to sell their artwork, textiles and products since the beginning of time. Bazaars and markets, peddlers seated atop wagons stacked with their wares, traveling salesmen, flea markets, yard sales, and shopping malls have all changed the face of retail in their own time.

A relatively new version of retail, fueled by social media, is known as pop-up shops. Surf the events page of your Facebook account and you are sure to find one almost any weekend around Frederick County.

“‘It’s here and it’s gone’ is the definition of a popup,” says Leslie Ruby, a Middletown resident who has nurtured this form of sales around Frederick for the past six years. “One key element is the focus on created and handmade products; another is the temporariness—because sooner or later, the shop will disappear,” she says.

Temporary businesses have appeal for a variety of reasons, which include minimal overhead, decreased sales risk, avoiding the cost of a lease and flexibility. They first began in the early 2000s in Los Angeles and New York City—high-rent cities where startup businesses struggle to find affordable retail space—as entrepreneurs tested out their new products or creative, edgy items. Even established brands have used pop-ups to test new lines: one of the most famous early pop-ups was when retail Target took over a boat on Chelsea Piers in New York City to launch a new line in 2006.

The concept of pop-up shops began to appear in Frederick vernacular in 2012, when Ruby launched monthly pop-ups of women’s career clothing in a space donated by the Frederick Memorial Hospital Auxiliary’s thrift store, Select Seconds, on East Patrick Street. “I treated it like my job for a time,” Ruby says of the effort invested to bring in clothing donations, prepare them for sale, advertise the monthly time slot and staff it with volunteers. Called W2WM Pop-Up Shop, it benefitted the Frederick County Woman To Woman Mentoring program.

By 2014, with financial and logistical help from the Frederick County Chamber of Commerce’s Leadership Frederick “Leaders on Loan” program, the shop went mobile, popping up at places like Frederick County Workforce Services, where trainees in resume-building and interviewing skills found a shop immediately after career-counseling sessions. “We noticed the amount of networking happening while people were shopping there. We looked at each other and said, “That’s why we’re doing this,” Ruby says. 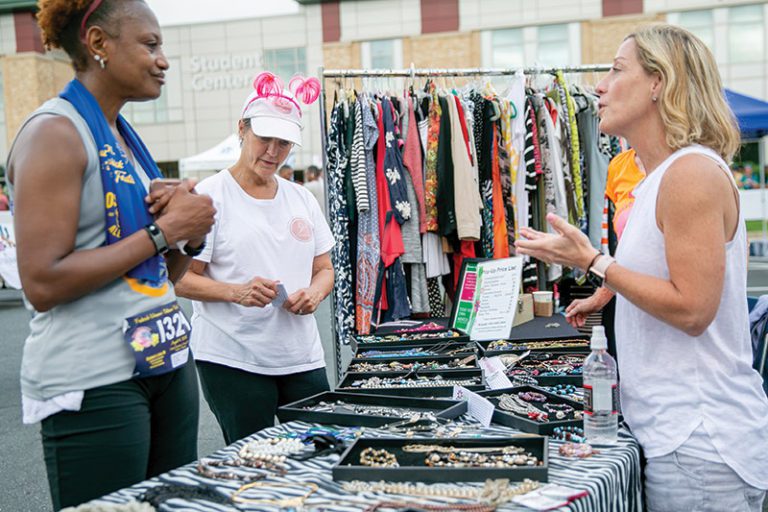 Over time, aspiring entrepreneurs connected with friends and retailers to introduce their products in their shops with pop-ups. A.J. Naylor, owner of Fred & Co., was one of those. “People who follow me have never been in your store,” he told his first pop-up host, Tracy Hathaway, owner of the former Gravel & Grind coffee shop on Carroll Street. “I’ll bring a whole new customer that would have never thought of coming to your location.”

Naylor brought in his core product, Frederick-branded baseball caps, along with shirts and items he developed for the pop-up, and had a blue-ribbon sales day. He successfully tried other locations, like Lazy Fish restaurant on Patrick Street, and settled in for a few months at Authentic Barber Company on Market Street. Managers at Flying Dog Brewery took notice and asked him to collaborate on designing a line of merchandise for their craft beer, and he was on his way.

“Things took off after that and I needed to find a permanent space,” he says. “Pop-ups helped me to get this stuff out of the front room of my studio apartment in Downtown Frederick, and they exposed me to a side of Frederick I had never seen.”

Kara Norman, executive director of the Downtown Frederick Partnership that promotes the city’s core, says pop-ups have been part of the transformation of the area’s retail character. Fifteen years ago, rents were lower and many Downtown businesses were in early-entrepreneur stage. Their hours were not consistent as the owners balanced full-time jobs with shopkeeping.

Now, a new generation of full-time business owners is established and vacant space is at a premium, making pop-ups inside stores a common occurrence and viable way to start a business. “For these businesses, hosting a pop-up brings in a whole new set of customers who get a change in the shop and are exposed to new things,” Norman says.

Serendipity Market & More has embraced the pop-up concept in her store because it fits with the mission to be a purveyor of locally sourced items, says Diane Branson, co-owner. “We strive to showcase local so having a space for artists to bring their work for sale for a time is a good fit, and brings new people in,” she says.

Pop-ups can be interesting ways to showcase unused space, as well. Ruby says one of the most successful pop-ups she facilitated was in a vacant department store in Brunswick several years ago. “We worked with Brunswick antique stores and staged the space as a shop, so that we could develop a flow,” Ruby says. “It worked beautifully with a lot of traffic when we opened it with 20 artists for Brunswick Railroad Days.”

Local commercial Realtor Jay Mason hopes to work with pop-up entrepreneurs to showcase vacant retail space around Frederick County. “The possibilities to lease a space increase with the additional eyes you put on the space,” he says. “It is another avenue to market the property to a different audience. Properties are marketed to the brokers and their sales and leasing associates in the area; tenants will use the internet to increase their knowledge of the market, so the pop-up shop will add another aspect to marketing, which is word of mouth.”

With her six years in Frederick pop-up experience, Ruby has launched a business of her own, PopUp Frederick. She got the idea after her years of facilitating pop-up events, including temporary artist markets at Sky Stage, the events space on Carroll Street. She came to realize that artists may be good at creating a painting or pottery, but may need help with various aspects of business. “I started this as a way to help artists and entrepreneurs market themselves and get access to pop-up spaces,” she says.

Pop-ups provide a networking and social aspect that many entrepreneurs don’t get to enjoy until they are part of one. “It’s a road for businesses to grow,” Ruby says. “In the mix of an event with 15 artists, four or five are checking how to navigate this marketing system. It creates a community with a generous community of experienced people.”