Shave and a Haircut … and More 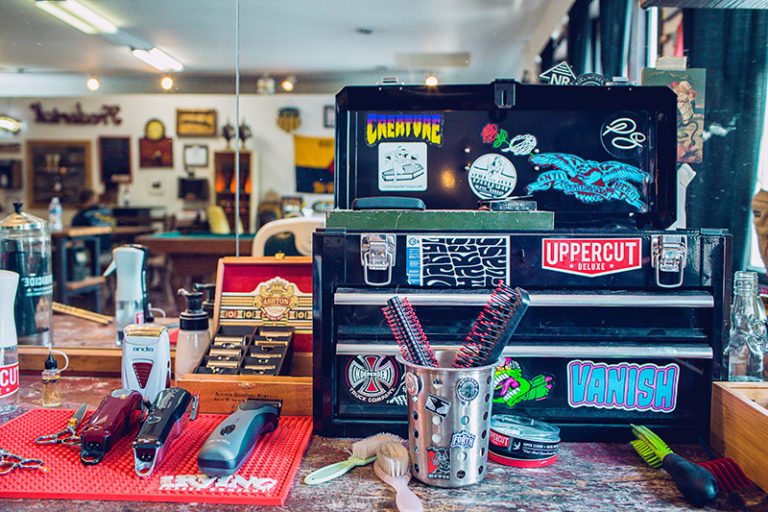 At Tried & True Barbershop, above Emporium Antiques on East Patrick Street, old and new fuse to create a distinctive vibe. A pool table commands space in the center of the shop and three barbers work at chairs lining the wall. Customers are invited to shoot pool, read a magazine, watch TV or even enjoy a beer—yes, a beer!—before or after their haircut.

Owner Daniel Casey says his customers are mostly male and range in age from 16 to 55. He offers traditional services like shaving as well as modern haircuts and styles. “Kids want haircuts that celebrities and athletes have,” he says. They show him photos on their phone, usually pulled from social media, and he gets to work.

Casey also offers an interesting service for bridegrooms and groomsmen. The shop can be rented out on the day of the wedding, when the men come in for haircuts, shaves and space to change into their formalwear. Casey, who used to be associated with a men’s clothing store, says the groomsmen leave his shop looking impeccable, and it’s a service that he believes is unique to his shop. “This is how I set myself apart,” he says.

In the 1988 live-action/animated film Who Framed Roger Rabbit, it is asserted that no Toon can resist completing the musical call, “Shave and a haircut … ,” without adding, “two bits.” The classic impulse seems to be settled law in Toontown and in Frederick the desire for a proper shave and haircut is growing by leaps and bounds. (Add in that animated Sproing! sound here.) But it will cost more than a quarter. (Add Cha-Ching!) To meet the demand, new barbershops have emerged, and old-fashioned ones are seeing an uptick in mostly male customers who are asking for hot towels and straight razors.

The trend seems to be driven not by nostalgia but by modern technology. Barbers throughout Frederick say young men and boys are increasingly showing up, too. Barbers are responding with enthusiasm and creative value-added products and services. And business is good; a modern take on the old classic may run from $35 to $58 dollars.

Just down the street from Tried & True, David Gonzalez has carved out his own space as the owner and operator of East Patrick Barber Shop. He offers traditional services like hot towels and straight-razor shaves, as well as all styles of haircuts. He jokes, “Today some people think you have to have a tattoo to say you are a barber.”

His customers sit in vintage barber chairs manufactured half a century ago that feature ashtrays built-in to the arms. He explains that men often parked their cigars in the ashtrays while getting a shave or a cut in days gone by. His shop is a non-smoking environment, per state law, but he loves the old ashtray chairs.

Gonzalez is one of four barbers who works at the shop that he established seven years ago. Several members of his family in his native Honduras were barbers and he was trained at the Academy of Professional Barbers in Montgomery County. He’s proud that he has been able to make a go of his shop in Downtown Frederick where he estimates that 90 percent of his customers are men and 10 percent are children. “It has been a great experience to do business here. I’ve been blessed,” he says.

Out at 1700 Kingfisher Drive in The Shops at Monocacy, Joey Kline has nailed barnwood panels on the walls and installed custom-made light fixtures on the ceiling that look like razor blades. His shop, All About Men Barbershop, is as carefully sculpted as his beard. And he knows a lot about beards.

His line of beard-care products is called The Angry Barber and he offers a premium shaving experience. Depending on the man and the beard, a shave can take 35 to 40 minutes. It consists of hot towels, pre-shave oil, more hot towels, shave cream and a straight razor. Kline also offers beer and wine to customers and hopes to provide a relaxing atmosphere with 10 barber chairs and plenty of music and flat screen TVs. “It’s basically a man cave where you can sit and hang out,” he says. “Even the ladies like hanging out.”

That may be true, but as the name of the shop suggests, 97 percent of his customers are male. He says trends and fashions come and go and his business is currently enjoying the popularity of long, full beards. He also likes working with kids, doing a lot of “first haircuts” and providing total grooming services for young men who are preparing for proms and graduations. “We provide awesome customer service and quality haircuts for little kids to grown men,” he says.

Ryan’s Krispy Cuts on North Market Street has taken great strides in opening wide the door to the barbershop. In the United States, barbershops like so many other places, used to be segregated along racial and ethnic lines. Ryan Outland Sr. has turned that old dynamic on its ear.

At Outland’s shop, black and white barbers cater to a diverse customer base. He says he tries to make the shop appealing and inclusive offering a wide array of services, everything from traditional shaves and haircuts to micro-braiding of eyebrows and eyelashes. “We make an effort toward inclusiveness,” says Outland. Even the ceiling tiles reflect the international flair of the shop; they are hand-painted with different countries’ colors and flags. The rainbow Pride flag is represented on the tiles, too.

Also on North Market Street, Wastlers’ Barber Shop is one of the oldest businesses in Downtown Frederick. Located next to The Candy Kitchen, it has the look and feel of a traditional men’s grooming parlor. Owner Frank Wastler’s grandfather started the business in 1965. The shop, with six barbers skilled in all facets of shaving and haircutting, opens at 6 a.m. several days a week to accommodate men on their way to work or school. “We’re all pretty versatile,” says barber Anna Tougarina. “We go beyond the pick-a-number kind of styling. We take it to the next level. We also do intensive beard maintenance. We go all out with beards.”

Wastlers’ caters to men, but also has a small number of women customers. Tougarina says a growing number of kids and young men request the latest buzz cuts and designs, too. She says she has a family that comes in on a regular basis to get cuts and then go antiquing in Frederick. “It’s a great place to be a barber,” she says.

Across town on U.S. 40, Amanda Blumenauer runs Gentlemen’s Choice Barber-Stylists. It was first opened in the now-defunct Fredericktowne Mall in 1972 but has been operating at its current location for more than 14 years. She and co-manager Kevin Fogg estimate that 85 percent of their customers are male; 15 percent female. The 13 employees offer all the traditional barbershop services for men and they get requests for a bob or undercut from women.

Blumenauer says customers frequently come with photos on their phone asking for trendy haircuts sported by famous athletes or celebrities. They are not always current celebrities because not all customers want new looks. Recently a barber was not sure how to handle a female customer’s request for the Dorothy Hamill cut. Fortunately, Blumenauer knew the reference to the 1970s style made famous by the Olympic gold medal-winning figure skater and was able to provide the stacked bob.

“I think customers know you can come in here and get a good, decent haircut,” says Blumenauer. She says being a good barber is an art form. “You have to have that knack.” Blumenauer and Fogg point out the distinction between barbers and other hair stylists. Barbers are trained in the use of the straight razor and have to demonstrate shaving skills among other proficiencies in order to qualify for a barber’s license.

Friendly Faces Baber Shop is a chain that bills itself as a family friendly environment. It caters to men, women and children. The Francis Scott Key Mall shop has five employees who offer a range of color, cut and design services.

“We do everything from haircuts, trims, shampoo, facials, eyebrows and designs,” says manager Carlos Harris. He says social media drives a lot of the trends in haircuts that customers request. He says haircuts featuring designs and colors as well as trimmed beards are very popular.

Barbers in Frederick are combining old-school service with new skills and designs to give the customer what he wants in an environment where he is comfortable. And now that a shave and haircut can cost $50 or more, barbers say they work hard to make the experience worth every penny.