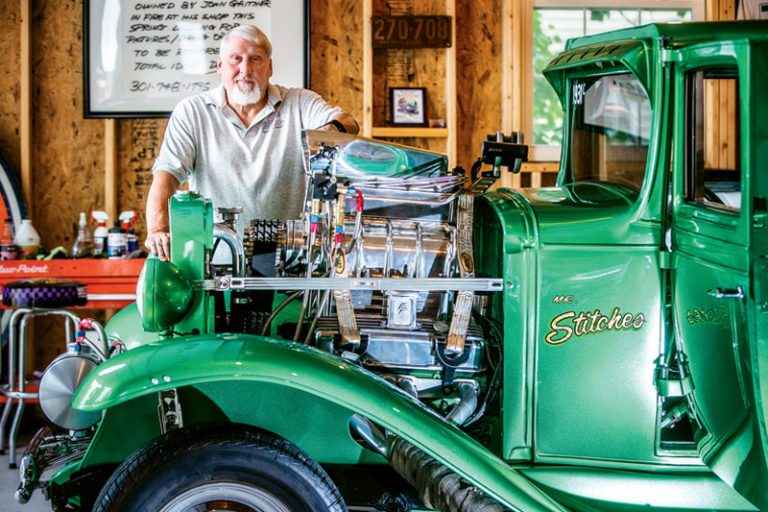 Dale Grimm turned the key in the ignition. The hot rod started, not with a purr, but with a sonic boom. It was earsplitting. As Grimm revved the engine, Mr. Stitches, the legendary ’31 Chevy five-window coupe came to life … again.

The car has a resurrection history. When local upholsterer Johnnie Gaither purchased it in 1941, it was already a beauty. But after he put his magic touch on it, carefully enhancing it inside and out, Mr. Stitches was ready for the racetrack. And that’s where Gaither took it, straight to the 75-80 Drag-A-Way in Monrovia. The car and its owner made names for themselves racing—and winning —throughout the ’50s and ’60s. After the racing years were over, Gaither and Mr. Stitches made public appearances throughout the drag racing and car club circuits. But a 2010 fire at Gaither’s garage gutted the car, nearly reducing it to scrap metal.

But Mr. Stitches would rise, and ride, again.

Dale Grimm, owner of Grimm’s Automovation on East Street in Frederick, and a team of tenacious car restoration professionals brought the ’31 Chevy back to life, rebuilding the wooden frame and using as much of the original metal as possible. They worked for eight years to restore the body, engine and interior, fashioning some parts by hand and reworking others to fit the classic car. Grimm gets emotional when talking about his restored gem. He considers himself a steward of the car rather than its owner. He says to understand the story of Mr. Stitches, one has to understand the story of “Mr. Gaither.”

Johnnie Gaither owned and operated B&G Upholstery on West South Street. His skills were highly regarded and his reputation landed him warranty work for a local Chrysler dealer. As his business flourished he became known as “Stitches.” Gaither insisted on putting the title “Mr.” in front of the nickname.

As an African-American building a business and a racing career in the ’50s and ’60s, he met resistance and opposition, on and off the track. Success in racing did not blur all lines. At the raceway in Monrovia, black workers and race fans were not welcome to walk into the adjacent restaurant; if they wanted to eat they were required to place their order at a back window.

“Johnnie and Mr. Stitches represent African Americans in racing history. There weren’t too many blacks in drag racing at all. He was competitive in the big races,” says Andy Sewell, a good friend of Gaither’s and a fellow member of the Road Knights Car Club. Gaither founded the club in 1959 and its members still participate in car shows and parades and raise money for charities. At 82, Sewell remains an active member. “I’m the only one in the club that still races,” he says.

During his prime, Gaither earned titles such as Little Eliminator on the track. He smoked competitors and engaged in fierce rivalries. He even faced off against drag racing legend Ronnie Sox at the Drag-A-Way.

After the dust settled on Gaither’s racing career, Mr. Stitches continued to delight fans of all ages. Gaither kept the ’31 gasser in his garage and neighborhood kids would ride their bicycles back and forth past the open door in the alley, hoping to get a peek at the green machine. As a teen, Grimm worked for a car dealership and made deliveries to Gaither’s shop. He remembers gawking at the hot rod many times.

OUT OF THE ASHES

It cannot be overstated how little was left of the car after the 2010 fire. The exterior was badly charred. The steel body and wooden inner frame were warped and twisted. The interior was gutted and the engine badly damaged. “The body started falling apart when you opened the doors. The steering column was melted in half.” The car was initially given to Sewell, but he recognized the work was too much for him, so he gave the car to Grimm, who eagerly accepted the challenge. “Friends flat-out asked me if I’d lost my mind. That’s still up for debate,” Grimm says.

Finding parts for a 1931 model was nearly impossible. So Grimm and his team of volunteers re-used what they could, morphing salvaged materials into hand-crafted parts. “Every piece of sheet metal on the car is the original from 1931,” Grimm says. “Stuff that people will never see, I know is there. The car is as nice underneath as it is on top.”

Grimm’s friends and professional colleagues became a hot rod corps of volunteers. They worked on details both big and small, from the body to the engine to the white vinyl diamond button-tuft upholstery. It took 50 hours to design and install the front bumper and Grimm estimates parts for the entire car would have cost nearly $60,000 without these experts’ hand-made creations. Steve Procter did body work and paint; Justin and George Reggio of Maryland Performance Center built the engine; Wayne Lawson constructed the internal roll cage; Mark Mead from Ken’s Automotive & Transmissions provided the TH400 transmission; Rusty Klipp did the customized upholstery; Nelson Grimes provided lettering and pin-striping; Steve Delaughter performed extensive mechanical work; and Bill Wilcom, who owned the 75-80 Drag-O-Way, provided technical advice.

The crew bonded over the years and when the work was completed they celebrated with a no-holds-barred barbeque at Grimm’s house. He says he is grateful to the team every time he starts the engine.

Throughout the restoration project, Sewell would bring Gaither to Grimm’s shop to observe progress. Gaither’s health was failing, and his visits had to be curtailed. Last year, shortly before his death at the age of 94, Gaither took a last look at Mr. Stitches. Unable to speak because of illness, Gaither’s eyes lit up as he stood and touched the car. His friends placed his old racing helmet on his head and helped him into the car. Johnnie Gaither sat in Mr. Stitches for hours.

Gaither’s funeral procession included his beloved car. Dale Grimm proudly towed Mr. Stitches through the streets of Frederick from the funeral home to the cemetery. Gaither’s wife, Pat, says she and the family were touched by the gesture. At the cemetery, Grimm got behind the wheel. “They said, ‘Start your engines’ and Dale revved it up,” says Pat Gaither, adding that Grimm is like family to her and she’s pleased that he is the new steward of the car. “When we get together, Dale and I have a crying good time,” she says.

Although Pat Gaither was not a racing fan, she has many wonderful memories of riding in Mr. Stitches on Sunday afternoons with her husband at the wheel and her children in the rumble seat. She was proud to share the family’s beloved car with the community, too. But one detail about the car has always puzzled her. “I always wanted to know why he didn’t put ‘Mrs. Stitches’ on it,” she says with a laugh.

The old garage where Johnnie Gaither used to house Mr. Stitches has been torn down. But the lane where kids used to gather to get a look at that one-of-a-kind car has a new name: Gaither Alley.